Old rock stars never die, they just go to Rock'n'Roll Heaven – or they will if Chris Murphy has his way.

A retirement village of that name, where residents can "rock till they drop", is just one feature of an ambitious masterplan the INXS manager has put to Ballina Shire Council for a massive development planned on farmland opposite Ballina airport. 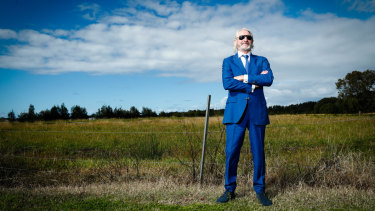 INXS band manager Chris Murphy at the location opposite Ballina Airport that he hopes will house his X Building. Credit:Danielle Smith

The 36-hectare site, which would also house Murphy's mooted X Building, complete with an INXS museum, is currently a swampy paddock. But the fast-talking 64-year-old has dreams that it could be turned into a model of forward-thinking development.

"Ballina has the opportunity to be one of the leading councils in the world by setting up a pre-planned precinct that has all the community elements, young people living there, older people living there, and this creative hub, the X Building, in the middle," says Murphy.

"You can build wetlands, battery stations for charging electric cars. The whole precinct could be car-free, where you'd get around by walking and cycling."

His plan has not formally been put to the council yet, but Murphy is convinced there is growing support for something more ambitious than just another light-industrial zone for the site, which is just a 20-minute drive from Byron Bay.

He also sees it as playing a crucial role in providing employment opportunities and motivation for the young.

"I want kids in the local area to go to the X Building, whether it's just to sit on the front steps or walk around the foyer. I just want them to get some sort of inspiration."

When he had his first discussions on the matter with the council a few years ago the response, he says, was, "Who's this Chris Murphy bloke coming in here to cause trouble?" Now, he claims, "I've got them inspired".

"I think what he's got planned, even if it's only 10 per cent [that comes to fruition], it's going to be fantastic," he says.

"The whole idea is to make that area a place for employment, for initiatives and innovative stuff. Chris has got things like rock and roll retirement villages and God knows what. The whole thing is good.

"He's gone to the trouble of getting it all drawn up. However, it's got to go before council, and we will definitely look at getting a master plan for the whole area, whether it's based on that or another one. There's still a lot of work to be done."

The first step for the council is to build two new roads, to fill three parcels of swampy land and to install services. That work alone is likely to take until late 2020, and to cost about $15 million. Some of that land will be sold off, but for the main site the council has ambitions to match Murphy's.

"We want the X Building and a movie studio and stuff like that," says mayor Wright of the plans for the site, though he adds it's not much more than wishful thinking at this stage. "We haven't really endorsed it yet. It went before council two to three years ago but it was too early to make judgements, so it's just been talk since then." 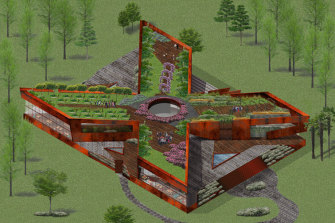 The X Building, proposed for a site opposite Ballina airport, would house a permanent exhibition dedicated to INXS, while also serving as an arts hub.Credit:Murphy Petrol Group

Talk is something Chris Murphy is especially good at. But the man who helped guide INXS to worldwide stardom as their manager from 1980-95, and who is now attempting to rebuild their profile as he takes them "from band to brand", has a track record of turning the implausible into reality.

"I've been picking trends all my life, and hopefully I'm still reasonably good at it," he says. And his latest pick is Ballina, the area he's called home for the past decade or so.

"There are writers moving here, directors, musicians – the music scene is just fabulous. There's a movement going on and it's not going away.

"The X Building is a concept to capture that," he says. "It's like a spaceship. It's a cow paddock at the moment, but we're planning to bring something from another world to this world."