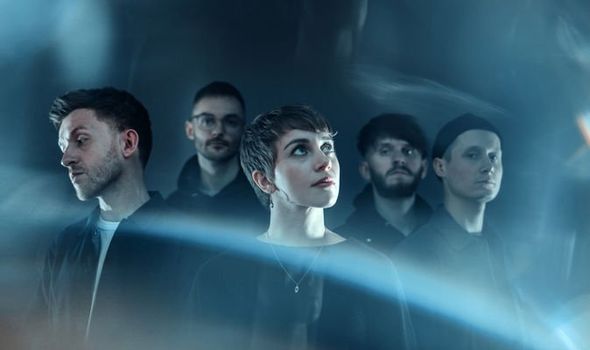 I’ll be the first to admit I am a relative newcomer to Rolo Tomassi as a band. They’ve always been in my periphery, sure, but I’ve never really, you know, sat down and appreciated what they have been bringing to the table. Their new album, Where Myth Becomes Memory, is the band’s most quintessential example of their sound yet. In it, they continue to blur the lines between metal, djent, and symphonic music that isn’t found anywhere else. A real attention to detail is evident in every measure of the new record, and while speaking to the band’s keyboards and synth player, James Spence, it’s plain to see where the passion comes from.

Between gushing about moving into a new flat with his girlfriend, James is visibly excited to talk about this new record, which has – of course – been two years in the making. But while the ongoing plague that wreaks havoc on the Earth is still an ongoing subject for many bands, James would rather look past it.

He exclusively told Express.co.uk: “I don’t want this to be remembered as a pandemic record. It certainly wasn’t. We just had to do it in different conditions this time around.”

Members of the band are scattered across the UK, while lead vocalist (and James’ sibling) Eva Korman is in the USA. Despite this, he says, they “made it work”. He added that the band have been working on music together for over 15 years. Creating is second nature to them now. The only difference this time around was they had a lot more preparation time before they finally got into the studio. And once they did, they really had to make sure it worked.

This also meant they felt extra pressure to have a “lightning in a bottle” moment. James nodded: “I think we were all so ready for it. It’s the sixth album we’ve done, we know how to write music together, we know how to help each other out, and fill in the gaps someone else is leaving … we were so efficient – which is a horrible word to use when you’re talking about doing something creative!”

Going beyond even creating an album, he confessed: “More so than ever… there was such desperation to be creative together. And that was definitely as a result of not being able to do it.”

Before we slipped into pandemic talks again, we switched gears to talk about Rolo Tomassi’s distinct style. The band’s latest album continues their musical journey which utilises emerging elements of jazz, ruthless breakdowns, addictive keyboard trills, and a real subtlety to everything in between.

Included in Where Myth Becomes Memory is the band’s recently released single: Closer. A touching track that forgoes all of the riffs and mathcore patterns in exchange for a more focused, pristine ballad.

James pointed out how the aforementioned teamwork allows for songs like Closer to have a space in their albums. He explained: “[Closer] was written as a piece of piano music. It was never supposed to be a Rolo song. It was just supposed to be something entirely different. I wanted something a bit minimal and intimate sounding… and it’s just one of those things that, every time I sat around the piano I found myself always playing it.” He smiled: “I liked it too much to not want to share it.”

And Closer isn’t a one-off on the Where Myth Becomes Memory. Later on, Eva’s dulcet tones are featured prominently once again in Stumbling, a stunning vocal and piano performance that drags up feelings of a thick atmosphere in a small room.

On the flip side, the album also hides away a brutal track titled Prescience that James reveals evokes a more “Hans Zimmer-esque” feeling. “There’s so much to it!” he said. “It’s this real foreboding sense of something. The whole record is about creating a sense of tension and drama, and everything we do is all about the contrasts and the sense of relief that comes at the end of something.” After a beat, he added: “I think [Prescience] has that.”

It is these special touches on the record that set Rolo Tomassi above almost every band in a few specific ways. This niche Rolo Tomassi has found themselves in has become their signature space in metal – and it’s obviously something James and his crew think about a lot.

But in a music scene where the likes of Architects and Bring Me The Horizon reign supreme, I wondered if Rolo Tomassi strives to be branded as “that” band – perhaps in an attempt to stand out from the crowd.

James paused and looked away from his Zoom camera, before confirming: “I don’t think we… there’s no sort of intentional obtuseness from us. We’re not trying to be the, sort of, antidote to anything else. But I think we’ve always done what comes naturally to us, and sought to be a bit of a reflection of the music that influences us.”

He added: “I think if we were purposefully trying to sound different it wouldn’t sound the way it does.”

But with that, listeners wouldn’t be blamed if they became enthralled in Rolo Tomassi’s endless string of talents. Their slower tracks are equally as thrilling as their heavier songs, which are as dense and meaningful as their sombre pieces. And all of them have been painstakingly cared for in production. The record as a whole is like a grab-bag of musical wonders where everybody will have a different favourite song or moment or line.

The extra moods and genre changes Rolo Tomassi utilise prove that they are perhaps the bravest band on the scene at the moment, and I think it’s a confidence that needs to be adopted by other acts going forward. What if every band started challenging themselves like Rolo Tomassi does in every album? Could the Arctic Monkeys develop a record with hardcore elements? Would Knuckle Puck be right at home in using Country music in an album? What if Stormzy adopted some riffs into his music?

We’ll likely never know, but Rolo have easily adopted their own sound into music, and every band around could learn a thing or two from them. But where the hell do they go next? It seems like James wants things perfect before starting a new project.

So when pushed about what the future holds for Rolo Tomassi in terms of albums, he blurted out: “I haven’t even thought about it yet personally,” before adding: “I really want to enjoy getting this record out, and there’s songs on the album that we haven’t even played as a five yet. Live! In the same room! So, we need to get our head around that before we start thinking about new music.”

Rolo Tomassi – Where Myth Becomes Memory is out now.

Rolo Tomassi are playing a number of dates in the UK this year – get tickets here.