“Soulless: The Case Against R. Kelly” is an essential follow-up read for viewers of “Surviving R. Kelly” who want to learn more about the singer’s alleged misconduct. The book is written by Jim DeRogatis, the journalist who has doggedly pursued Kelly’s story since his early days in Chicago.

“Soulless” is the culmination of DeRogatis’ career reporting on Kelly’s alleged behavior, beginning at the Chicago Sun-Times in the ’90s and stretching through his recent stories for Buzzfeed News about his supposed “sex cult.” While not all of the revelations are new, the result is similar to the blockbuster Lifetime documentary “Surviving R. Kelly.” There’s horror in reading about all of his reported crimes compiled chronologically, and seeing how little the public cared about his stories at the time and how his circle enabled him with its silence.

Again, while many of the stories in “Soulless” have appeared in one of DeRogatis’ many Kelly articles, some are told in more vivid detail in the book then they have been elsewhere. Read on to learn of some of the book’s most lurid moments.

Kelly has spoken publicly about his history of childhood sexual abuse at the hands of a female relative, including in a 2012 interview with Tavis Smiley and his 2016 sit-down with GQ. While the identity of the female relative has been speculated about in previous interviews with Kelly’s family members, “Soulless” makes the case that the woman is Kelly’s half-sister Theresa, who also abused his half-brother Carey. “Theresa is the cause of everything happening in the way that it did,” Carey told DeRogatis. Kelly’s former manager Don Russell also told him, “He was hypersexual, not because he chose to be, but because of his sister.”

Kelly’s sexuality also comes into question. DeRogatis writes, “Many women who’ve slept with him have told me Kelly is bisexual and has sex with other cis males. They say he keeps these encounters ‘on the down low,’ either because of shame or because it conflicts with the image he projects as the consummate ladies’ man on R&B and hip-hop scenes that still are often deeply homophobic.”

Additionally, DeRogatis fact-checks one of Kelly’s claims that he was abused by an older man close to the family. While he previously told GQ that his mother called the police on the man, DeRogatis could not find any records of an arrest for exposure or inappropriate sexual contact with a minor at Kelly’s childhood home’s address. 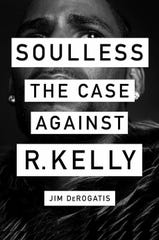 “Soulless” paints a more disturbing portrait of Kelly’s relationship with his mom, Joanne Kelly, than the singer has portrayed in the press, where he has presented her as his savior.

DeRogatis recounts how Kelly told GQ about how he stayed by his mother’s bedside until her death and told her he would dedicate his career to making her proud, even claiming she passed away in the middle of his moving speech.

Turns out, Kelly recounted a different version of his mother’s death in his 2012 “Soulacoaster” memoir, which DeRogatis found concerning. “Few people forget the details of their mother’s death,” he writes.

More concerning is the fact that DeRogatis’ sources claim that Kelly wasn’t actually close to his mother when she died, and even kept her away from the wealth he was accumulating. “Several sources told me that once his career began to take off, Kelly actually shunned the mother he claims he worshipped,” he writes, and quotes Kelly’s half-brother Casey that “Robert cut her off” because he did not approve of his mother’s relationship with his stepfather.

“He refused to deal with her medical bills — she checked into the office under a false name — although he had the money,” a “family friend” tells DeRogatis.

Among the many stories “Soulless” tells of Kelly’s tall tales is one incident in 2001, in which Kelly put out a song called “Soldier’s Heart,” dedicated to the victims of the September 11 terrorist attacks.

The song didn’t perform well on the charts, but that didn’t stop Kelly’s publicist at the time, Allan Mayer, from declaring in a release, “Radio stations around the country are playing it around the clock.” The star’s camp announced a concert in Texas, near Fort Hood, benefiting a local military family foundation.

When DeRogatis looked into the concert, he could find no evidence that it had actually happened, “no records or follow-up stories of proceeds from the release of the single or ticket sales from the concert benefiting any military charities.”

“When I asked a Jive Records publicist about how much they had raised, she could not give me a number,” he wrote.

Jay-Z, who once recorded the 2002 album “Best of Both Worlds” with Kelly and accompanied him on an ensuing tour, has been silent about the Kelly revelations of recent years. “Soulless” sheds light on why, reminding readers that the relationship between the two artists has long been toxic.

DeRogatis wrote that Jay-Z and his crew had “no love” for Kelly and his camp during the tour, recounting an incident when Jay-Z, during a section of the show paying tribute to fallen stars, flashed an image of Aaliyah, with whom Kelly had a notoriously fraught relationship, across the screen. The tour culminated in a member of Jay-Z’s entourage pepper-spraying Kelly after he fled the stage, with Jay-Z telling a radio station the next morning that audiences preferred him to Kelly. Kelly was eventually kicked off the tour altogether.