Mel B, Emma Bunton, Mel C and Geri Horner are currently in the middle of a UK wide reunion tour playing stadiums up and down the country.

However, during their recently gig in Sunderland things went seriously wrong.

As Sporty Spice chatted away to the crowd two unknown women erupted into a bawl.

Suddenly one woman is yanked to the ground by her hair before falling over the seats in front of her.

As she struggles to get back to her feet, another lady grabs her hair once more.

Despite being held back by her male companion, the lady continues to go on the attack.

Seeing her friend in trouble a third woman then joins in the brawl repeatedly punching the attacker.

The disgraceful scenes took place less than two meters away from a mum and her young daughter. 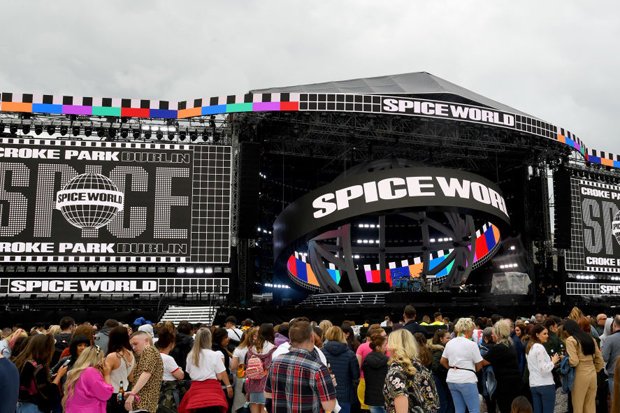 “The video’s only a few seconds long but the fight went on for ages.”

Security are believed to have been called to attend the incident.

A spokesperson for Northumbria Police said: “We have not received any report of a fight inside the stadium but we are aware of the video and will carry out enquiries.

“We would add that more than 50,000 people were in the Stadium of Light for the concert last night and there was just one ejection.

“The vast majority behaved impeccably and enjoyed a fantastic night of music.”