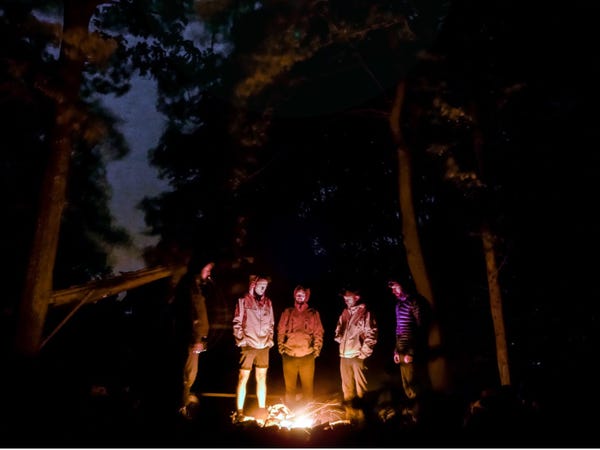 Certain ghost stories really haunt you, according to a moderator of Reddit's horror bubble r/nosleep — a place on the internet where people post scary stories told from a first-person perspective.

"There's definitely been ones that stuck with me," said Rebecca, one of the mods who ensure every post follows the strict set of rules before it is posted. "I think the ones that make the most impact are the ones where there's more of a beautiful aspect to them as well, or something really grim."

On the grim end of things, she said, is a story called "The New Fish" by T.W. Grim. Like many NoSleep stories, it captures the feeling of sitting around the campfire, listening to a ghost story that sends shivers down your spine.

"That one is very bleak," Rebecca said. "I love that story."

Grim didn't originally write "The New Fish" specifically for NoSleep. In fact, he found the sub by accident.

"I was just sort of poking around on the internet, looking for weird stuff to read, and Google did the rest," he told Insider. "'Ted the Caver' and the other stories I read on NoSleep were told with a simple, straightforward, and deadpan narrative that was somehow very engrossing, even though I generally dislike minimalism in literature. It made me interested in trying my hand at first-person narratives."

"The New Fish" is now looked back on as one of the best and haunting original stories on NoSleep, being a firm favorite of long-time fans of the sub.

The story begins on a dark November night

The story begins with the narrator in his trailer on a dark, windy November night, remembering his time in prison. It features several inmates drinking hooch in a cell and talking about another inmate during a prison lockdown.

After a power outage, one character called Mikey tells the group that he has a story about the last time the lights went out 12 years ago. There had just been an influx of new inmates — or new "fish" — and there was one who caught his attention.

"At the end of the line is the prettiest little sweet-boy this whole penitentiary has ever seen," said Mikey. "He was, I dunno … Almost like an angel, or something. He was too perfect, like a picture out of a magazine, y'know? Slender and fair-haired, teenybopper heart-throb material. Yeah, the kid was pretty, all right, and he looked like he'd be easy to punk."

There was something off about the kid, though, Mikey said.

"The kid had no expression in those wide, blue eyes," he said. "None at all. Just … blank."

What transpires is so gory and unsettling that only reading it yourself will do it justice. But the ending leaves the reader with the chill of having so many unanswered questions about what's going to happen, and no real desire to find the gruesome answers.

The story resonated with NoSleep fans because it seemed so real. Grim's description of the cell, his life in the prison, and his inescapable fear of the person who may be after him are characteristic of what makes a nosleep story so special — you feel like you're there with the narrator, your heart pounding with theirs, awaiting the inevitable horror with dread.

"The concept for New Fish was bouncing around in my head for a year or so before I took a stab at writing it," Grim told Insider. "I really liked the idea of a ghost story set in a maximum-security penitentiary, and I wanted to experiment with writing a layered, story-within-a-story kind of framework."

He said he wrote it over the course of a few weeks in October of 2013, and I posted it in November.

"It created a bit of a stir because it was presented in a very different manner than your usual creepypasta," he said, "but I wouldn't say it was a particularly popular story at the time."

The spooky impact of 'rural horror'

"What I really like is a good character study, which can be very difficult to pull off," he said, which explains why his character is "The New Fish" feel so compelling and distinct from one another.

"I generally write with a very somber, serious tone, with a dash of humor every now and then for a bit of relief from the gloom and doom," Grim said, adding that he loves to use rural settings. "In my opinion, 'rural horror' is extremely effective due to the oppressive atmosphere of loneliness and isolation — endless corn fields, winding gravel roads, and dense stretches of forest, it's the perfect breeding ground for a horror story."

Grim certainly transports you to that trailer with a feeling of vulnerably remoteness in his conclusion, leaving you with the fear of what lies outside in the gloom and the warning that no matter where you are, you're not as safe as you might think from "the thing that hungers."