Provided all parts were oiled and in working order, how could this gig flop?

We already knew The Cure were still a great live act. And the Opera House wasn’t going to drop the ball, given the scale of the pop culture coup in scooping other major cities to host the band’s five 30th anniversary gigs for seminal 1989 album, Disintegration.

We knew the crowd would be pumped too. They were the few chosen by a ballot, after all. 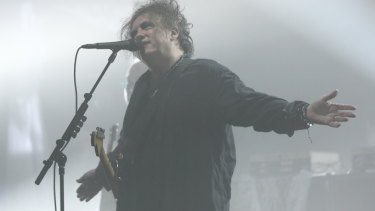 Robert Smith of The Cure performs at the Opera House on Friday.Credit:Dominic Lorrimer

The only unknown, then, was the second set billed as "rarely performed B-sides" and "specially curated deep catalogue cuts". Fancy talk for what, exactly?

But first to Disintegration and to tonight’s victorious replication of its vast, hypnotic gloom, leaving space for Robert Smith’s beautifully strangled voice to sound the same as it ever did.

Because sameness, really, is what we want. The formula doesn’t need tweaking, thanks.

The Cure relinquished sovereignty to these songs decades ago. I don’t even need to listen to the album anymore because its songs reside in my blood and bones and can be played internally, in full, at will. 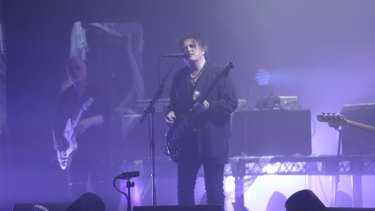 The Cure are playing five shows for their 30th anniversary.Credit:Dominic Lorrimer

The bliss of Disintegration is at its most concentrated in Plainsong, Closedown, Last Dance and Fascination Street. The album’s two poppiest – and most popular – songs, Lullaby and Lovesong, fell flattest on Friday night. Smith really tried, which was touching, but his delivery was like the grass trampled into an ad-hoc path in a park: the worn-out part in what’s otherwise a lush lawn.

I’d have been happy to leave it at Disintegration. Or to hear Disintegration again. Any other combo would cause this perfect album and its correspondingly perfect show to spring a leak.

Which it did when the band returned to do some “instrumental demos that never made it onto the Disintegration album”, said Smith, and later, bless him: “I can kind of see why they didn’t”. 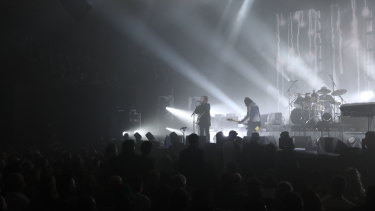 The Cure perform at the Opera House on Friday.Credit:Dominic Lorrimer

Philosophically, I was rooting for it. It was a risky move that reeked of integrity. Practically, I was sodden with the satisfaction of Disintegration and it was hard to reach past the happy mush to sharpen my ear to hear curios I didn't know.

There were other surprises, too, including a sea-shanty-ish, Pogues-esque turn. But with four gigs to go, let’s leave that spoiler-free.