Playboi Carti tells me his mood of late can be described as “punk monk.” He means it sort of holistically. The rapper has an almost religious devotion to the studio, spending every day there; his current project is the deluxe version of his recent album Whole Lotta Red. Carti says he barely even sleeps, preferring the Zen of the creative process. He splits his time between living in Atlanta and flying to California to see his son, though he’s plotting a move to New York, eyeing places on the Lower East Side. “It’s a city that I can get lost in,” he says.

“Punk Monk” is also the title of one of the more memorable cuts from Whole Lotta Red, which topped the charts upon release in December. It’s a track where the notoriously tight-lipped Carti gives listeners a glimpse into what he’s been thinking. There are devilishly candid assessments of his frustrations with the music industry, with Carti naming names. “They tried to turn me into a white boy, but I’m not Lil Dicky,” he growls in his newly minted vocal register — a grizzly squawk that sounds untethered from the limitations of human vocal cords. Conceptually, the song represents a formal juxtaposition of vibes, like meditating in a mosh pit. The 24-year-old rapper has long professed punk-rock inspirations, but now he’s reconciling them with something that resembles inner peace. “Some people don’t know how to be alone, but I love it,” Carti explains. “‘Punk Monk’ is just an anthem of being alone in this game, and the people that you got, you can keep them right there because that’s all you need.”

Whole Lotta Red arrived just before Christmas — “I wanted people to look at it like I gave them a gift. That’s what it was,” Carti says. The album caused a rift on social media, with die-hard fans immediately embracing the project, and others recoiling at its rougher edges. The production leans on harsh drum patterns, and Carti’s unique vocal expressionism sews into the fabric of this new, chaos-fueled, landscape. On “Stop Breathing,” his exasperated gasps punctuate the track’s distorted drums to hypnotic effect. Standout track “Control” might end up being the year’s best love song, sounding more like a punk ballad than a rap track. “Ever since I met youooouu,” Carti sings, swooningly stretching out that last word and flexing his nimble vocal register.

The release of Whole Lotta Red also marked the arrival of a new Playboi Carti, now adorned with candy-red braids and a vampire alter ego (“Vamp Anthem” goes so far as to sample Bach’s “Toccata and Fugue in D Minor, BWV 565,” made famous, of course, by Dracula). There are other eccentricities, too. His album art is a reference to Slash magazine, an underground punk zine printed in Los Angeles during the Seventies. And one of Carti’s new calling cards is the chaotic use of capitalization in song titles.  He says it comes from remembering back on texting with old phones when you had to use the predictive text technology T9. “I say it in a song, too, like, ‘They can’t understand me, I’m talking hieroglyphics,’” Carti explains, referencing the Kid Cudi-assisted “M3tamorphosis.” “I was pointing out shit like that because I feel like my experiences created a lot of things for me, and then I let the people run with it.” 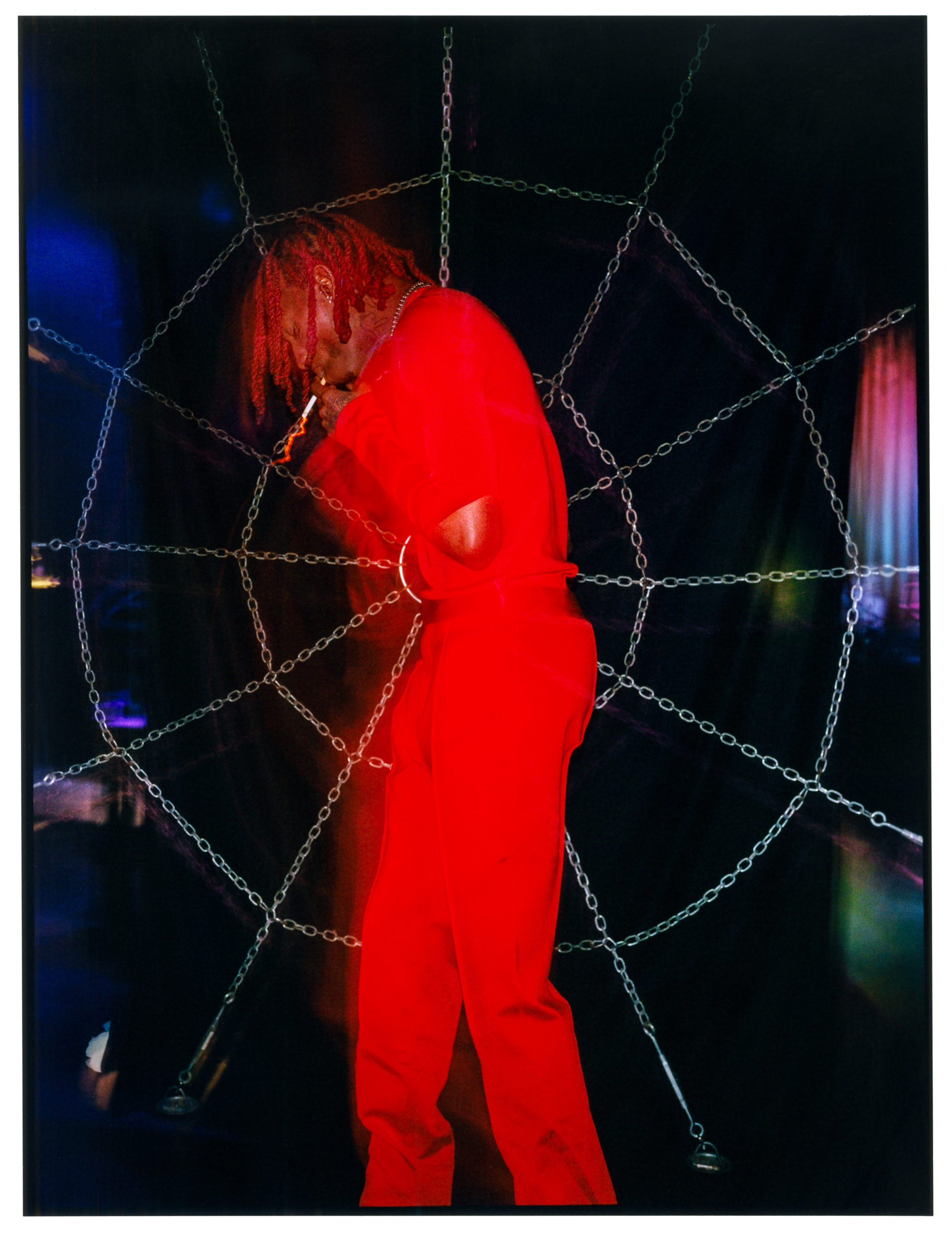 Carti has reason to see himself as a trendsetter. Since the release of 2018’s Die Lit, his impact on the shape and tenor of modern rap music has been hard to ignore. Nowadays, everyone raps with some version of what’s been dubbed “baby voice” — the high-pitched, ad-lib-filled style that surfs on treacly, ethereal production — but Carti’s unique vocal acrobatics remain unmatched. Despite not releasing anything for years, he was able to adapt to the language of a generation online. If you type Carti’s name into YouTube, you’re greeted with dozens of pages of fan-uploaded compilations of leaks, snippets, and remixes. The most exciting way to listen to Carti, for the past several years, has been through the vantage point of his mostly young and dedicated listeners.

Now, with the unflinchingly experimental Whole Lotta Red, Playboi Carti hopes to lay the groundwork for the future. “That’s my job as of right now. This sound is something that’s going to be regular and relevant in the future,” he says of his new music. “That’s just part of creating something new. If this is something that people accept right away, how different is it?” He is characteristically cryptic when it comes to specifics about the expanded version of Whole Lotta Red. “The deluxe is part two of a monster album,” he says. “What they can expect from it is some great music. That’s it.”

“Some people don’t know how to be alone, but I love it.”

Born Jordan Carter, Carti grew up in South Atlanta, and as a teenager balanced basketball and an eclectic sense of creativity. He came up rapping alongside the members of Atlanta’s Awful Records collective, who exposed him to an experimental style of rap production. His early appearances on songs by the producer Ethereal would sow the seeds for the Carti mythology. On 2015’s “Beef,”  Carti delivers breezy punches over a sparse and subtle drum pattern, stretching his nascent vocalism with breathy ad-libs that sound like approximations of waves crashing. Carti would release his first mixtape in 2017, a self-titled project that featured the viral hit “Magnolia.” The song’s infectious hook — “In New York I milly rock/Hide it in my sock” — would eventually get memed into oblivion, a harbinger for the ways the internet was about to morph the experience of listening to your favorite artist. A year later, Carti’s debut, Die Lit, served as a bona fide proof of concept. Carti and the mumble-rap phenomenon he’s credited with giving rise to were here to stay.

In the time between Die Lit and Whole Lotta Red, Carti remained nothing short of an enigma. There was no new music despite a rapidly growing audience. Adding to the sense of intrigue was the fact that unlike most of his contemporaries, Carti basically avoids all social media. “I’ve been like this my whole life,” he says of his aversion to publicity. “When I do speak, it’s for a reason.”

Carti, though notoriously mum about his personal life, is not immune to controversy. Following the release of Whole Lotta Red, a firestorm emerged on social media after his ex-girlfriend, the rapper Iggy Azalea, with whom he has a child, alleged that Carti was failing his duties as a father. Carti didn’t respond to the allegations, but later posted a picture of himself with his son, Onyx, on Twitter. When we talk on the phone, he explains his reluctance to share more about his personal life with the world. “I take care of a lot of people,” he says. “I got a kid. But with the world, the only thing I want to show them is the creative process and the music. I think people want to see the normal side of Playboi Carti, but you can’t normalize me.”

New York might end up being the perfect backdrop for the fashion-focused Carti. Matthew Williams, who currently sits at the creative helm of the French luxury fashion house Givenchy, is credited as an executive producer on Whole Lotta Red. While it’s not the first fashion-industry collaboration in the music business, it does point to an increased symbiosis of the two fields. Williams, specifically, has long been on the cutting edge of both fashion and music. His brand, Alyx, is famously name-dropped on Drake’s “Toosie Slide.”

“This dude is actually doing everything that I stand for. He’s just turning it into clothes, I’m turning it into words,” Carti says of Williams, who he also says is a longtime friend of his.

Despite the ongoing pandemic, Carti says that when he was recording Whole Lotta Red he had his live performance at the top of his mind. “I visualize how the crowd is going to react to it,” he says. Like any rock star, Carti’s music is best experienced in person, which he says makes the timing of the record ideal. “I feel like Whole Lotta Red is the perfect album for me to show my presentation onstage,” he explains. “If I put this album out now, by the time we’re able to do these shows and get back active like we was, I will have gave them time to dissect the music.”

For now, Carti’s fully realized rock-star mode plays out in more than just his music and his clothes. Getting him on the phone involved a level of patience reserved for tough-to-pin-down rockers. The kind you see in movies like Get Him to the Greek and Almost Famous. The enigma surrounding Carti, he explains, isn’t intentional but more a product of how he lives life. It’s part of being a punk monk. Just before our line cuts out, I ask him about the inspiration behind his new vampire persona, and his short response could very well sum up Carti’s identity as a musician.

“Vampires live forever,” he offered nonchalantly. “Vampires is the most fashionable characters.”