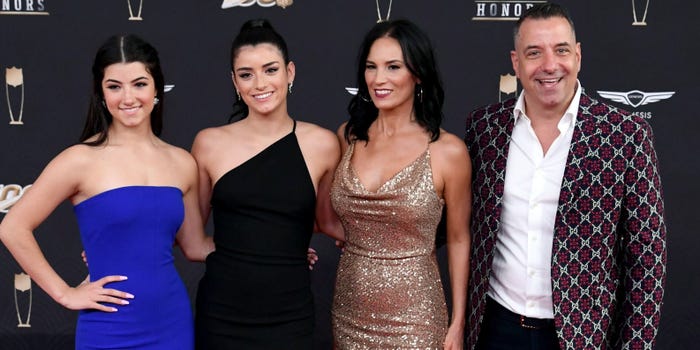 The D'Amelio family has taken TikTok by storm, and now, they're getting the TV show treatment.

Charli D'Amelio, the 16-year-old TikTok sensation who was named the video-sharing platform's top creator in 2020, will star in a Hulu docuseries with her 19-year-old sister, Dixie, and parents Heidi and Marc, called "The D'Amelio Show," the family announced in an Instagram video on Friday.

The eight-episode series is set to premiere in 2021 and will follow the D'Amelios as they "navigate their sudden rise to fame, all the while still staying true to their family values," according to Variety.

Heidi D'Amelio said in the Instagram announcement that on "The D'Amelio Show," viewers can expect to see their "day-to-day in LA," which is where the family, who previously lived in Norwalk, Connecticut, is currently based.

Charli, who became famous for her dancing videos on TikTok — particularly her version of the viral "Renegade" dance choreographed by Jalaiah Harmon — reached 100 million followers in November. The Verge reported Charli's success on TikTok represented a major milestone for a creator on the app, as it's taken some YouTube creators 14 years to reach the same follower count.

The star has also garnered partnerships with prominent brands, from starring in hummus brand Sabra's "OK boomer" Super Bowl commercial in February to collaborating with Dunkin' on her own drink: "The Charli."

Marc D'Amelio said in a statement that the Hulu docuseries will give fans a look into their lives that they don't often showcase on their various online accounts, which includes their YouTube channel, which has 1.27 million subscribers and counting.

"We've always been a very close family, but this experience has brought us even closer and we're really excited to share a glimpse of our lives with the world," Marc D'Amelio said in a statement to Variety. "Many people create impressions of us based off of short content, a few minutes or even seconds. But now, we're looking forward to sharing a side that you likely don't get to see on our social channels."

Representatives for Hulu did not immediately respond to Insider's request for comment.