Don Everly, the oldest of the two Everly Brothers, has died. The New York Times reported that the 84-year-old singer died at his home in Nashville on August 21. Don’s younger brother Phil Everly died in 2014. The Everly Brothers were one of the most successful rock ‘n’ roll acts from the 1950s, and the duo influenced popular music for decades. The New York Times reported the brother duo “rivaled Elvis Presley” for airplay during that time. According to the outlet, the Everly Brothers averaged “one single in the pop Top 10 every four months from 1957 to 1961.”

Some of the Everly Brothers’ top hits included songs “Wake Up Little Susie,” “Cathy’s Clown,” “All I Have to Do Is Dream,” and many others. In an email interview with The Times after Don’s brother Phil’s death, fellow singer-songwriter Paul Simon wrote: “Phil and Don were the most beautiful sounding duo I ever heard. Both voices pristine and soulful. The Everlys were there at the crossroads of country and R&B. They witnessed and were part of the birth of rock ‘n’ roll.”

Don is survived by his fourth wife, Adela Garza, who he married in 1997. The Washington Post reported that Don’s other survivors “include a daughter from his first marriage, Venetia; three children from his second marriage, Stacy, Erin and Edan; his mother, Margaret Everly of Nashville; and six grandchildren.” Keep reading to learn more about the tragic death of the Everly Brothers’ singer.

The Everly Brothers were pioneers in rock and country-rock music 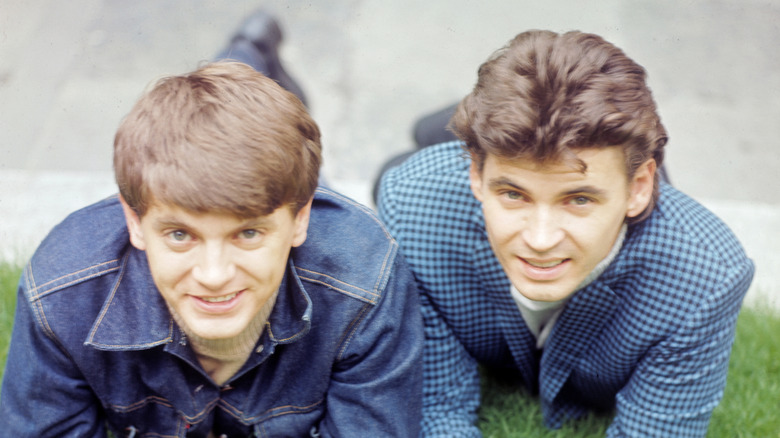 Fans and the music world are mourning the tragic death of the Everly Brothers’ Don Everly. According to The New York Times, the Everly Brothers “all but single-handedly redefined what, stylistically and thematically, qualified as commercially viable music.” The Nashville duo’s sound influenced some of the biggest musicians in the world, including the Beatles, Simon and Garfunkel, and the Eagles. The Times reported that the Everly Brothers “Appalachian harmonies and a tighter, cleaner version of big-beat rock ‘n’ roll” made them pioneers in rock and country-rock music.

The iconic duo had a falling out in the early ’70s. In a live performance at Knott’s Berry Farm in California, older brother Don put on an “erratic performance,” leading to an onstage fight between the brothers, at which point Phil Everly left the stage. Rolling Stone reported that Don had struggled with substance abuse issues for years and appeared “drunk” during the performance. People reported that Don appeared on stage alone the following night and said, “The Everly Brothers died 10 years ago.”

The Times reported Don and Phil didn’t perform together for 10 years after the Knott’s Berry Farm blow-up and hardly spoke to each other. But after reconnecting at their father’s funeral, Don and Phil patched up their relationship. According to The Las Vegas Sun, the Everly Brothers performed two concerts at London’s Royal Albert Hall in 1983. The duo officially reunited after that and even opened for Simon & Garfunkel. Younger brother Phil, however, gave up performing in 2011 and died in 2014.