Tyler, The Creator’s new album, “CALL ME IF YOU GET LOST,” is already doing numbers. Released June 25, the project has recently debuted at No. 1 on the Billboard 200 Albums chart and is the rapper’s second album to achieve as much.

The project, which marks Tyler’s sixth studio album, includes features from Lil Wayne, Ty Dolla Sign, 42 Dugg, LIl Uzi Vert, and Pharrell Williams (along with a surprise apology to Selena Gomez). To support the release, the rapper scheduled pop-up shows across the country, starting with the Roxy Theatre in Los Angeles on June 29.

“will never forget tyler’s show tonight,” one lucky attendee wrote on Twitter. During the gig, Tyler performed all 19 songs from the new album, including “Lumberjack,” which seems to be a fan-favorite. “lumberjack has been solidified as my top 1 of this new tyler album,” one Tyler fan admitted. The rapper also performed the song at the 2021 BET Awards, where he pulled up in a pastel green old-school car and fought some heavy winds.

But what is Tyler’s “Lumberjack” all about? Let’s find out below.

Tyler, The Creator gives his parents a specific shout-out 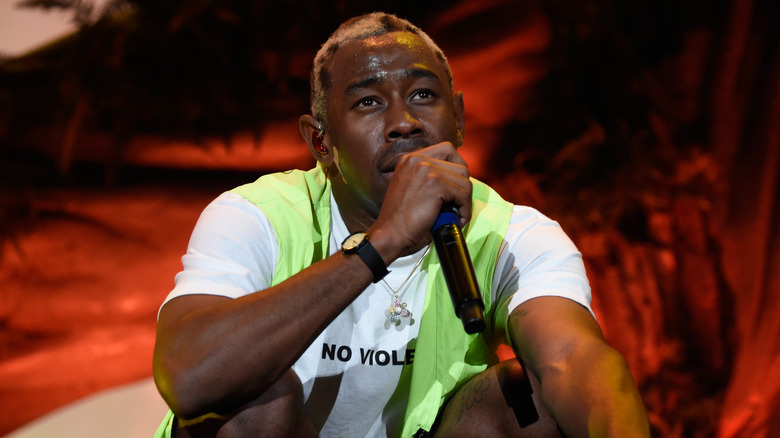 On “Lumberjack,” Tyler, The Creator raps about his achievements, all while reflecting on his past. “Used to laugh at me, listen to me with their ears closed,” he says in the second verse. “Used to treat me like that boy from ‘Malcolm in the Middle’ / Now I’m zero, zero, zero, zero, zero, zero.” In the first verse, Tyler even brags about how much he paid Drake for performing at his festival, Camp Flog Gnaw, in 2019. “I hit Drizzy and told him I had a milli’ for him,” Tyler raps. Considering that he only performed for about 30 mins, that’s a pretty hefty fee.

However, there is one line, in particular, that seems to resonate with fans. In the chorus, Tyler gives his parents a shot-out for conceiving him. “Rolls-Royce pull up, Black boy hop out / Shoutout to my mother and my father, didn’t pull out.” “Tyler the creator said in Lumberjack ‘shout out to my father didn’t pull out’ I felt that LMFAOOOO,” one fan wrote on Twitter.

And though the aforementioned line seems to be a favorite among fans, Tyler loves all of his lyrics equally. “EVERY LINE,” Tyler tweeted, replying to a fan asking which line from “CALL ME IF YOU GET LOST” was his favorite. “I DIDNT EXAGGERATE ANYTHING. EVERYTHING ON HERE IS REAL AND REALLY MY LIFE, HONESTLY MY MOST PERSONAL ALBUM SO ITS ILL THAT PEOPLE ARE INTO IT.”