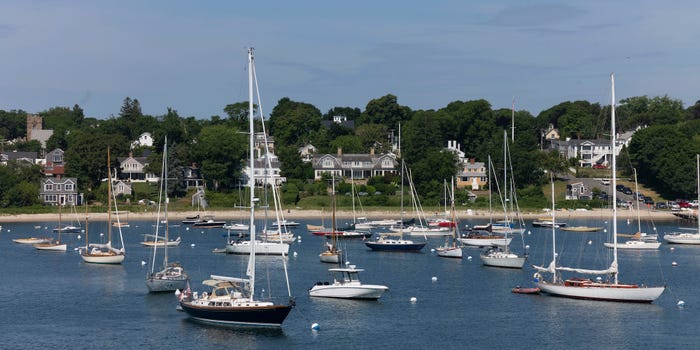 A 1,000-word story about a Martha's Vineyard wedding was quietly deleted from Vogue's website on Tuesday after a resident complained to the magazine that the event had contributed to a coronavirus cluster on the island, the Vineyard Gazette reported.

The article, which was posted online on Monday, detailed the October 11 wedding of Chelsea Keyes and Evan McDuffie at the Lambert's Cove Inn in West Tisbury, according to the Martha's Vineyard Times, which — along with the Vineyard Gazette — had read the story before it was taken down.

The story made no mention of the attendees getting sick after the wedding, and in the nearly 70 photos included in the Vogue story, attendees were rarely seen wearing face masks or following social distancing, both outlets reported.

The article is no longer available, but a post from Vogue's official account still mentions the wedding.

Health officials have connected to the wedding ten COVID-19 infections, including those of six island workers, according to the Vineyard Gazette.

While no other COVID-19 cases on Martha's Vineyard have been directly tied to the wedding, the cluster corresponded with a surge of cases on the island.

In the past three weeks, the island has recorded 118 new infections — more cases than the island experienced in the first seven months of the pandemic alone, the Martha's Vineyard Times reported.

The Vineyard Gazette first reported on the cluster in late October.

At the time, island health officials said the venue would not be penalized because it adhered to all state and local protocols, the newspaper reported. However, the officials said that wedding guests did violate interstate travel rules, which required anyone coming from outside Massachusetts to fill out a travel form and either quarantine for 14 days or provide proof of a negative COVID-19 test.

But by the time the cluster was identified, the out-of-staters had already returned home and no one was fined, the Vineyard Gazette reported.

Insider has contacted the couple and Condé Nast, Vogue's parent company, for comment.

A representative for Condé Nast told the Vineyard Gazette that the editors "ensured that appropriate measures were being taken to prevent the spread of COVID at the event."

The spokesperson said that once the magazine learned that guests had contracted the virus, it made the editorial decision to remove the piece from its website.

In an email to the Martha's Vineyard Times, the bride, Keyes, said "it is extremely difficult to pinpoint the origin of the outbreak," and pointed out how another wedding was held at their venue on the same day, "as well as many weddings during that weekend that were staffed and supported by a number of individuals."

"For our wedding specifically, we followed the protocol of the venue and the commonwealth of Massachusetts, including having an outdoor wedding with 40 guests, designating sanitization areas, and — as a welcome gift at the ceremony — gave out custom masks made by a local MV vendor," Keyes said.

"While we do not know the source of the outbreak, we deeply regret the impact it's had on our guests, family, and the Island community."

The owners of the inn, John and Keya Cain, also said in a statement to the Gazette that they went "above and beyond to follow CDC and state guidelines regarding COVID-related safety measures," including asking guests to wear masks and fulfil travel requirements.

"As mentioned in the article, they [the couple] followed CDC guidance and provided masks to their guests at the ceremony entrance. It is our understanding that they only removed masks while eating and taking wedding photos for their Vogue article, and this only occurred outdoors."

In an email to the newspaper, West Tisbury health agency Omar Johnson said the fact that the attendees were not seen following social distancing or wearing face masks in photos from the event is "beyond the board of health's control."

That's "something not monitored by us, that would have been in the hands of the wedding coordinator, the Lambert's Cove Inn, and the individuals that participated in the ceremony," Johnson said.

Keyes and McDuffie are not the first couple whose wedding has caused a coronavirus outbreak. In two recent cases, nearly half of the attendees at an October 31 wedding in Blue Ash, Ohio, contracted COVID-19 after the event, while a 300-person wedding in Ritzville, Washington, caused two outbreaks after 17 guests tested positive for COVID-19.

Earlier this month, a New York couple also faced criticism after The New York Times published photos of their indoors wedding, where not all of the 200 guests were wearing masks.