Nipsey Hussle, the late rapper who was a respected and beloved community activist in South Los Angeles, will be honored at the 2019 BET Awards with the humanitarian award.

The posthumous honor will be presented Sunday night at the Microsoft Theater in Los Angeles. The rapper is also nominated for best hip-hop male artist at the awards show.

Born Ermias Asghedom, Hussle was shot to death on March 31 outside his South Los Angeles clothing store in what police said was a personal dispute. His funeral, where Beyoncé and Jay-Z were among the big-name celebrities in attendance, was held at the Staples Center in Los Angeles. The last celebrity funeral held at the concert arena was Michael Jackson’s in 2009.

The Bonnaroo performance everyone talked about: Cardi B performs in bathrobe after her outfit rips 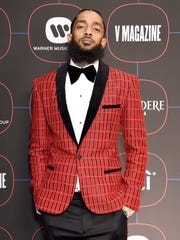 John Legend, DJ Khaled and YG will pay tribute to Nipsey Hussle at the BET Awards, where the slain rapper will receive a humanitarian award. (Photo: Gregg DeGuire, Getty Images)

After releasing a number of successful mixtapes, Hussle found greater success with “Victory Lap,” his major-label debut album released last year. It earned him a Grammy nomination — his first — for best rap album, though the project lost to Cardi B’s multi-hit “Invasion of Privacy.”

Cardi B is the leading nominee at the BETs with seven, including two bids for the top prize (video of the year), thanks to her hits “Money” and “Please Me,” co-starring Bruno Mars. The rap star is schedule to perform Sunday.

John Legend, DJ Khaled and YG will pay tribute to Hussle with a performance.

The 2019 BET Awards will air live across seven Viacom networks in the United States, including BET, MTV, VH1, Logo, MTV 2, MTV Classic and BET HER.