Eddie Morales was 15 when he met Michael K. Williams, a few months after the future actor was slashed in a bar fight that turned into a vicious chase and left him scarred for life. Morales would go on to choreograph Missy Elliott’s “Supa Dupa Fly” video and dance behind Justin Timberlake, but in the early 1990s, he was just broke in Brooklyn. “Mike took me under his wing,” Morales recalls. “We would drink and dream. We didn’t have money for no nice clothes; we boosted that shit. We wanted to look fly, so the only way to get it is to get it.”

Williams mentored Morales and introduced the younger man to New York’s flourishing club scene, where fleet-footed dancers mingled with major-label artists and music video directors. Sometimes Morales had to learn the hard way. When he landed a gig with Williams dancing for the act Technotronic — known for their crunchy late 1980s hip-house hit “Pump Up the Jam” — Morales remembers choreographing an entire tour in a six-hour whirlwind of creativity. “I had it coming out of my body like rain from the sky,” he says. He met Williams at the airport later that week, ready for the road. To Morales’ shock, his friend showed up “dressed fresh to death.” “I’m like, ‘How the fuck?!’” Morales says. “Where did you go boosting and you didn’t tell me?”

But Williams had acquired these clothes through more traditional means. “He said, ‘I just got paid,’” Morales continues. Williams explained that he’d pocketed the money for Morales’ choreography earlier in the week. Decades later, Morales laughs as he recalls the epiphany that would change his life: “You could get paid to do this.”

When Williams died last month at age 54, tributes poured in for his prodigious gifts as an actor — especially for his work playing the character Omar, a modern-day Robin Hood whose whistle signaled as much trouble as his blasting shotgun, in The Wire. Fans and peers also celebrated his prominent parts in Boardwalk Empire, The Night Of, Lovecraft Country, and more.

But Morales and other nightlife mavens met Williams long before he was beamed into living rooms across America every weekend. They remember a fervent, versatile dancer, self-taught but capable of impressive improvised routines; a giving and loyal friend who would go to great lengths to help those around him, whether that meant splitting a meager food portion with a young Morales during a period of homelessness or helping his one-time boss, house singer Crystal Waters, out of a tight spot; and an indomitable spirit who became good at most of the things he tried — dancing, modeling, acting, even cooking.

“Y’all just know the actor,” Morales scoffs. “I was there before that shit.”

Leslie Segar, who danced with everyone from Michael Jackson to Whitney Houston to Mary J. Blige, met Williams in 1989. Back then, she says, “house music was our thing,” and Washington Square Park “was our stomping ground.”

She and Williams were both part of a crew of dancers that met regularly to practice and battle each other. “I loved the way he could transition from being a hardcore masculine hip-hop dancer into a very fluid, gazelle-like house dancer,” Segar says. The group would keep each other informed about auditions for videos and tours and dance until sunrise in clubs like Paradise Garage, the Tunnel, the Sound Factory, and Zanzibar. “You lived for the dance floor,” Segar says. “You lived to be in the next club.”

At the time, Williams “was still in the midst of ripping and running through the streets of New York City,” according to Segar. “We didn’t have money, didn’t have jobs, didn’t have nowhere to go,” Morales adds. Sometimes the two men slept at the end of the Broadway-Lafayette subway platform, or sneaked into a theater on the Lower East Side and got a few hours’ rest on the second-floor balcony, maybe catching a bit of a morning acting class as a free bonus. They’d dance for food money, steal a hot dog if they had to.

The New York club scene was markedly different in the early 1990s — VIP sections were rare, and stars rubbed elbows with the hoi polloi. “Back then it was no big deal to see Busta Rhymes in the club, LL Cool J, Andre Harrell,” Segar says. “Everyone danced. Everyone was approachable.”

Not only that: Rappers and house singers used clubs to find the people whose moves would make their videos stand out. “Artists would come up and be like, ‘Yo, I need you in my video,’ and take our number,” according to Segar. “That’s how a lot of us got our work.”

Another rising star who frequented the clubs was Waters, the woman behind hummable house classics like 1991’s “Gypsy Woman (She’s Homeless).” She picked Williams to be one of the dancers in her “100% Pure Love” video in 1994; he paid her back by showing up late. “He was hustling back then, trying to do two videos in one day,” Waters explains. “We were almost done with the shoot when they showed up. I was like, ‘What balls do you have?’ The director was pissed, and the label was pissed — they didn’t want to spend another hour shooting, because videos were very expensive back then.”

But Willams was a smooth operator, and no one on set stayed annoyed at him for long. “He had a way of talking to people — ‘We’re here now, we got this,’” Waters says. Williams put together some choreography on the spot, and the “100% Pure Love” video is one of the most impressive clips from his years as a dancer. (Morales says Williams is also dancing next to him in Elliott’s iconic “Supa Dupa Fly” video.)

Waters took Williams with her on a world tour, and he helped choreograph the singer’s live show with Segar. “The word back then for dancers was emoting, giving off a feeling without even really having to move that much,” Waters says. “He would always emote the fun, the joy, and it was always so smooth.”

“The house music style is different than the hip-hop style; it’s more like ballet sped up, combined with African dance, and he was amazing,” adds Wendy McKenzie, a dancer who later helped Williams transition into acting. “And he had a unique look. To have a certain look really opened doors for you.”

Waters had just one “pet peeve” when it came to Williams’ dancing: Before every show, he wanted to make slight alterations to the choreography. It was easy for the dancers to adjustment on the spot, she says. “But I couldn’t remember that shit all the time!”

Old habits died hard on tour. When checking out of one hotel, Waters was shocked by the size of the bill; she recalls learning later that Williams and his fellow dancers had walked off with the plush bathrobes from their room. In another instance, Waters remembers Italian designers chasing her dancers through the airport because they had neglected to return the fancy shirts provided to them for a performance at fashion show.

But Waters didn’t mind. In fact, she was grateful to have Williams along in the rough-and-tumble world of touring. She was a rising act, and many promoters were more or less hustlers, slow to pay and quick to cause trouble. Williams “saved my butt in a few circumstances,” Waters says. “He helped me get out of places when you had to get out of them.” One time, Waters and her troupe showed up to perform for someone who waved a gun around and demanded they do the show for free. Another time, Williams broke into a restaurant to procure some food in a town where everything closed early.

This was in character: Williams “took care of a lot of people,” Morales says.

To illustrate, he launches into another story about the man he describes as a father, uncle, and big brother rolled into one. “I had a heart attack in 2016, and I’m like, ‘Just let me go, if it’s my time, it’s my time,’” Morales says. But “it ain’t my time, ’cause Mike finds out, he comes and pays for my hospital bills and my stress test.” 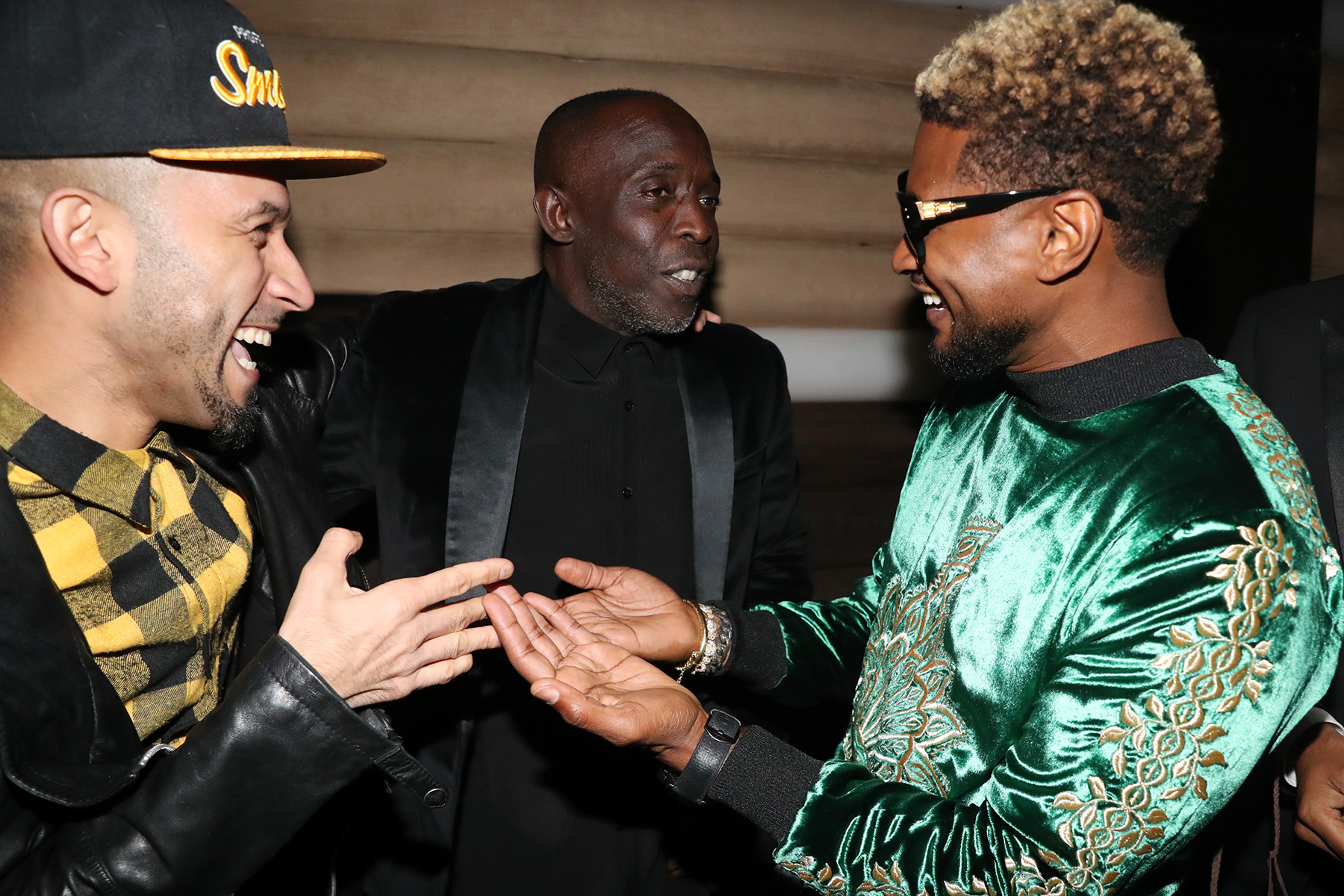 Eddie Morales, Michael K. Williams, and Usher at a 2017 event.

When Williams visited Morales at the hospital, the actor began to laugh.

“Ain’t payback a bitch?” he asked his old friend.

Morales was initially confused. “What do you mean?”

Williams reminded him of the Technotronic dance routine from 20-plus years earlier. “‘Remember that choreography? I told you I ain’t gonna forget you.’”

Morales wept that day at the hospital. Talking about it now, he starts crying again softly on the phone. “Just thinking about it breaks me,” he says.