In Thirteen Ways to Look at Birds, an anthology of ornithological poems took flight with one of Australia's most distinctive voices.

Kelly did not fly solo – accompanying him was a flock of musicians who combined seamlessly, while each too was allowed moments to soar as individual artists. 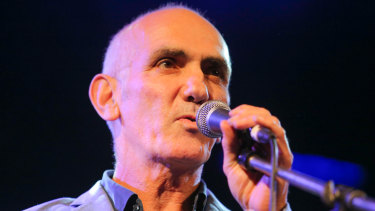 The Seraphim Trio brought violin, cello and piano, co-composer James Ledger played synth and electric guitar, while Alice Keath – in Kelly's words, a "captain's dream" – sang like an angel and played everything from banjo to autoharp.

Even the lighting and effects were a work of art, the blue light and haze around Helen Ayres in her violin solo like swirling nimbus.

Over the course of 70 minutes, the artists flowed seamlessly through musical genres from contemporary classical to blue grass.

In one instrumental interlude Jim and Tim Nankervis took the audience on "trip with the black swan" in a "journey without words" but electric guitar and cello instead.

In between, Kelly spoke to the poems and the poets, paraphrased Chekhov, compared nightingales to magpies. Despite it being a decidedly literary affair, the night never felt academic nor pretentious. Kelly spoke with common tongue and wore a ready smile, taking pleasure in the words and the music.

A critic in the crowd commented after that the flow of poems was sometimes lost to the music, and this was true. But like a bird in the forest, fluttering boughs and branches, lines familiar and powerful would suddenly materialise.

Lines like "tender is the night", from John Keats' Ode to a Nightingale, and "only the whisper of decay softly circled the bodies", from Miroslav Holub's darkly comic The Fly.

Kelly explained the poem was about both the danger and the wonder of the migration of birds, something he said was now more perilous than ever due to pesticides, cutting down of forests, climate change.

We are living through one of Earth's greatest mass extinctions, Kelly said. We are losing birds.