As viewers await the return of ABC’s Big Sky Season 2 in 2022, three cast members shared a behind-the-scenes TV magic trick they use in an upcoming argument scene. John Carroll Lynch, Romy Rosemont, and Anja Savcic also give a little teaser about what Wolf, Agatha, and Scarlet argue about in Big Sky Season 2 Episode 9 when it returns in 2022.

Big Sky Season 2 makes its return for 2022 on Feb. 24. The drama opens with a distraught Cassie Dewell (Kylie Bunbury). In the Dec. 16 episode of the drama based on The Highway book series, Ronald Pergman (Brian Geraghty) killed Cassie’s father, Joseph Dewell (Jeffrey Joseph). Jenny Hoyt (Katheryn Winnick) offers to help Cassie seek revenge on the killer; however, the two women do not know who it is. Instead, a clip of each suspect flashes across the screen — Ren (Janina Gavankar), Wolfgang Legarski, and Ronald Pergman. 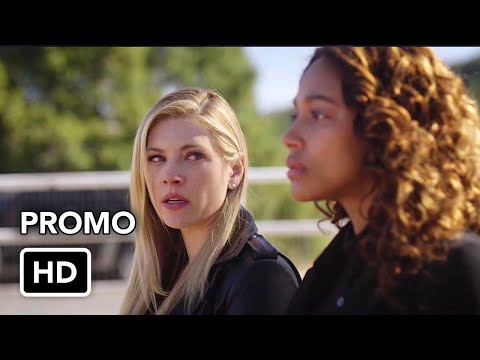 When Big Sky Season 2 returns in 2022, Ronald is back on the Wolfgang ranch, much to his dismay. In the Dec. 16 episode, he kidnapped Scarlet’s daughter, Phoebe, and made a quick stop at Dewell & Hoyt. Ronald took a quick sniff at Cassie’s jacket and menacingly looked at the investigator board covered with his photos. He told Cassie’s father to have her back off; however, the man attacked Ronald with a wrench. As Ronald left the detective office, Wolf smacked him with a shovel. From a little behind-the-scenes clip with Lynch, Rosemont, and Savcic, viewers find out what’s going on when the show returns.

“You may be wondering what this is,” Lynch tells viewers. “This is to shoot a night scene during the day. The crew is safer, and we get to have actual hours instead of standing around in the middle of the dark trying to shoot a scene. So, this is what they do.”

Lynch shows fans a tall area covered in black tarps. They filmed an upcoming scene in Big Sky Season 2 in the “bag.”

“So when you see the scene we are shooting, there is an argument between the three of us about Ronald. Why do we always argue about Ronald?”

Then the three laugh about their “problem child,” Ronald. Although they can laugh about him off-screen, they have a tough argument when Big Sky Season 2 returns for 2022. Viewers recall that Wolf Legarski feels there are sometimes dogs that he can’t reform and must “put down” instead. It sounds like he wants to kill Ronald, while Scarlet is against that idea. It’s not evident where Agatha stands on the matter, but she had hopes of reforming Ronald in the past.

Where is ‘Big Sky’ Season 2 filmed?

After watching the behind-the-scenes clip, viewers might want to know more about that Big Sky filming location in season 2. Although the setting of the series is remote locations in Montana, the cast never films anywhere near there. The producers filmed Big Sky Season 1 in Vancouver and various British Columbia, Canada locations. Then, for Big Sky Season 2, the filming location changed to Rio Rancho, New Mexico. The only thing that is filmed in the rocky mountain state is the aerial shots of the town and that beautiful Montana skyline.