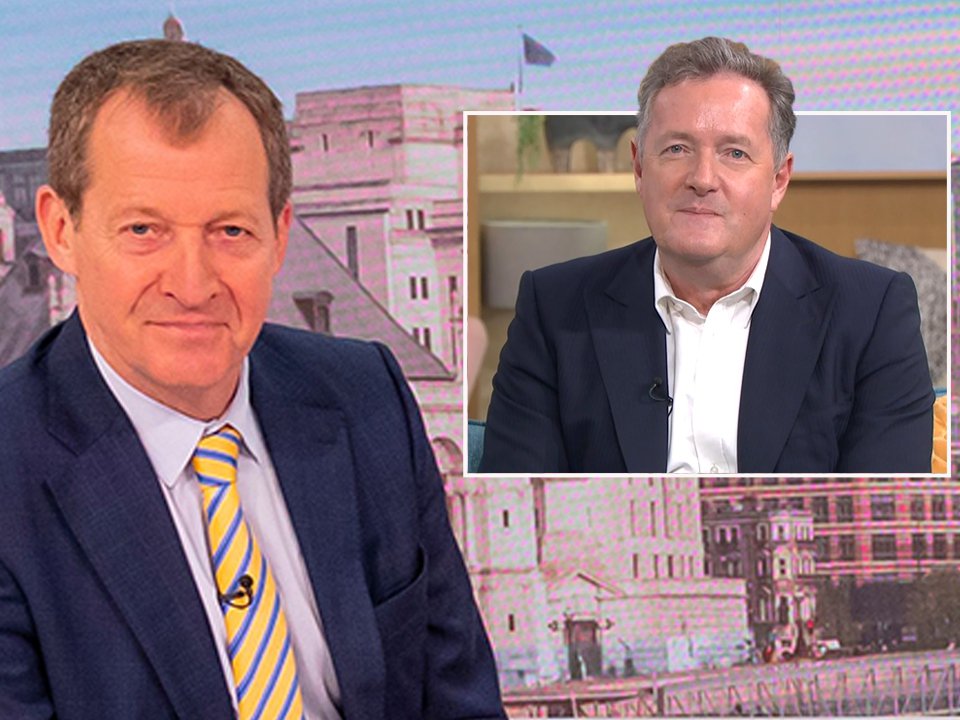 Alastair Campbell clashed with Piers Morgan on Twitter, coincidentally on the very week he took the presenter’s old chair on Good Morning Britain.

And on the morning of Alastair’s second day on GMB, Piers went on another rant, blasting celebrity ‘mental health campaigners’, which he accused of making money from ‘exploiting their myriad problems’.

The post clearly struck a nerve with Alastair, who fired back in a lengthy Twitter thread: ‘If you mean me – and I have a charity account which takes a share of my earnings, which go to causes we believe in, mainly mental health and education for poorer children. I do paid speaking gigs and often ask for fees to be paid to charity.

‘I have made money from books and documentaries about mental health, (I do have to make a living) and in all cases some of the proceeds go to charity. I am an ambassador for @[email protected]_a patron of @MaytreeRespite and Global Ambassador for Australians for Mental Health.

‘I’m also involved with MH charities in Ireland + Scotland. I have sometimes been paid to advise organisations on mental health in the workplace and again always will make donation to sector organisation. In my running days I raised over £1m for @bloodcancer_uk

‘If you’d like to hear more about this work @schooltruth and I will be talking to @kayburley tonight 7pm about our book Living Better on the back of which Fiona has set up an online support group for partners and families of depressives. Go to Blackwell’s site for tickets.’

Well, that would appear to be game, set, and match for Alastair. Not quite.

Piers quickly responded: ‘No, I was talking about celebrities..’

Peace appears to have been restored, however, after the briefest spat, with Alastair commenting: ‘Ah ok.’

In his Mail Online column, Piers recently questioned Alastair’s appointment on GMB, which has so far divided fans of the daily news programme.

He also took issue with the official GMB Twitter account encouraging Alastair to engage in fiery debates and to not ‘hold back’.

Piers explained that, taking into consideration the nature of why he left the programme – following his rant against Meghan Markle – this advice seemed unwise.

Got a story? If you’ve got a celebrity story, video or pictures get in touch with the Metro.co.uk entertainment team by emailing us [email protected], calling 020 3615 2145 or by visiting our Submit Stuff page – we’d love to hear from you.