Randall Klein from Bravo’s Camp Getaway must have created one amazing vision board because she joked to a friend about ending up as a guest on Watch What Happens Live with Andy Cohen instead of being an audience member. 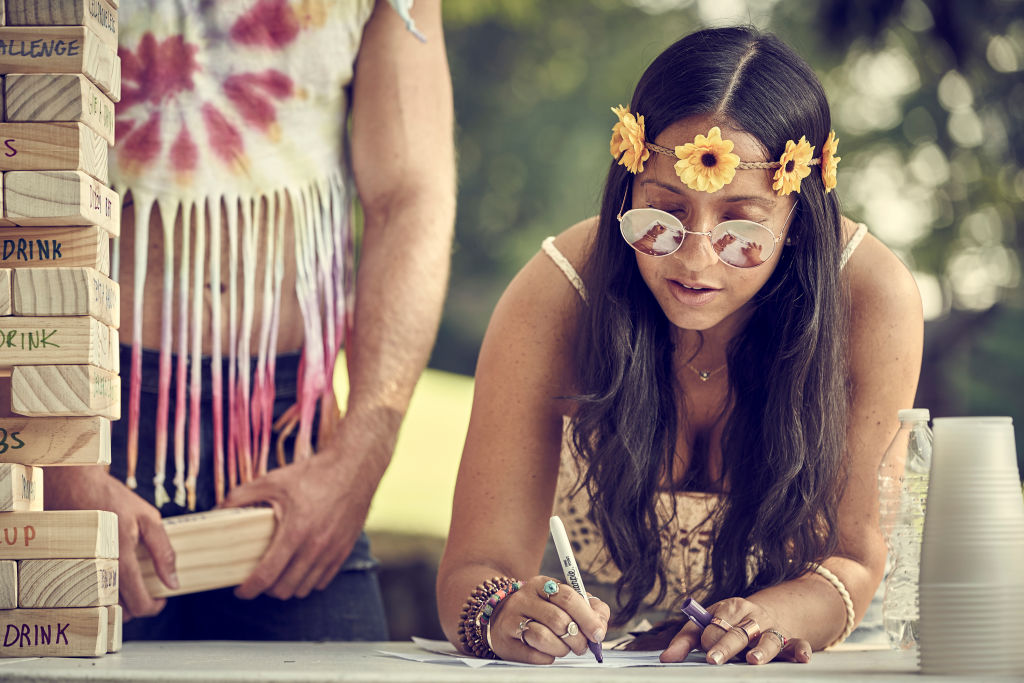 Klein scored a coveted invitation to sit in the audience of the intimate nightly talk show. While she was thrilled to be part of the evening, she joked to her friend that one day she’d be the one manning the bar or sitting on the couch. Her musing may end up coming true as Klein is part of Bravo’s newest series, Camp Getaway.

The series follows the guests and social coordinators who work at a camp for adults. During the week, the 300 acre camp in Kent, Connecticut hosts children. But once Friday afternoon hits, it transforms into a weekend for adults. Klein, along with seven other social coordinators come to Camp Getaway every weekend to get the party started for the guests and often find themselves part of the party, as well as the drama.

‘Camp Getaway’ was the perfect storm

Klein said on the Behind the Velvet Rope with David Yontef podcast that she’s a loyal Bravo fan. She also has a long love of camp, as she attended camp through her teens until college. While she’d never actually worked at a camp, she jumped when the opportunity presented itself.

RELATED: Bravo’s ‘Camp Getaway’: What Does It Really Cost for a Weekend at Camp?

“It kind of all came together,” she recalls. “I heard about the camp, I thought it looked really cool, and then knew they were doing a Bravo show. It kind of just a perfect storm for me. I was like ‘Okay, let’s do this. I’ll work here, I love the camp, love Bravo, sounds fun.’”

She adds that what viewers see is accurate and the social coordinators truly bonded. “There’s definitely a family dynamic, which happens at camp. After two weekends of living with someone you’re much closer than meeting them for an hour or two,” she says. Adding that the comparison to Summer House meets Below Deck is completely spot on too.

She’s the ultimate Bravo fan who is now on Bravo

Klein and Yontef dished about Bravo like two close friends gushing over their favorite television shows. She definitely thinks she and Bravo producer Andy Cohen would get along like two peas in a pod too.

“I feel like Andy and I too, you know, he’s Jewish and went to camp,” Klein says. Adding, “I think he’ll appreciate [it]. I think we would vibe.”

That’s when she shared the story of being in the audience of Watch What Happens Live with Andy Cohen. “I went a long time ago, I said to one of my friends, ‘I’m here now, the next time I’ll be here I’ll be like on the couch.’ As a joke, you know? I made so many comments about so many things about Bravo prior to actually being on it, it’s kind of wild to be on the other side now.”

RELATED: ‘Below Deck’: Kate Chastain and Captain Lee Both Agree This Bravoleb Is Hot

As a well-versed Bravo fan, Klein shared who were some of her favorite Bravolebs, including who she thinks is the hottest guy on the network. She loves Shahs of Sunset, Below Deck, and really got into this season of Summer House. While she quickly said Sonja Morgan from The Real Housewives of New York City was a favorite she also loves Bethenny Frankel. And the hottest guy on Bravo for Klein? Steve Gold from Million Dollar Listing New York. But alas now that Gold is a new dad she may have to keep looking.

But added, “Embarassingly enough, I never do this, but I swear, I’m pretty certain that I DM’d him,” she dished, insisting she never slides into the Bravoleb DM’s. “But that ship sailed,” she concludes.

Camp Getaway is on Monday at 10/9c on Bravo.