Cobra Kai cast member Jacob Bertrand has gotten to portray major changes over four seasons of the show. His character began as Eli Moskowitz. When he joined Cobra Kai, Eli became Hawk, with a big mohawk to match. The different seasons have tested Hawk’s friendships with the other characters, but one development of Cobra Kai Season 4 made Bertrand nervous.

Bertrand spoke with Showbiz Cheat Sheet by phone on Dec. 20. He shared one moment from the new season that gave him pause. Cobra Kai Season 4 is now streaming on Netflix.

The fact that Eli Moskowitz/Hawk lost his mohawk in ‘Cobra Kai’ Season 4 has led to drastic changes, emotionally and physically. In the ongoing conflict between Eagle Fang and Cobra Kai, the Cobra Kai students shaved Eli’s mohawk. It was emotionally devastating for Hawk, and cause for concern by Bertrand too. 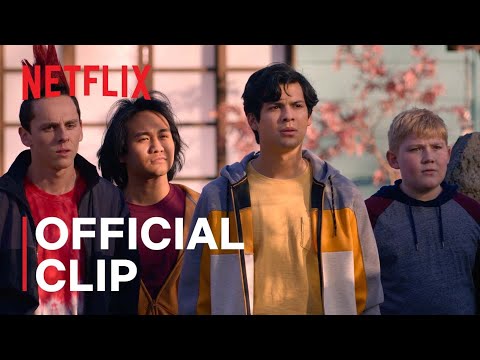 “You know what’s funny is that I was nervous to buzz my head,” Bertrand told Cheat Sheet. “It was such a drastic change and I’d grown so accustomed to having the mohawk and the red hair and the blue hair and all the different colors I got to do. It was shocking and I was a little nervous to do another big physical change for the character. But it was fun. It was a cool little challenge. I can say I buzzed my head for a role before. Not a lot of people can say they’ve done so many things with their hair for one character.”

Jacob Bertrand didn’t have a buzz cut for long

Cobra Kai Season 4 filmed at the beginning of 2021. Co-creator Jon Hurwitz shared a lot of behind the scenes photos from Atlanta, Georgia from January to April. Betrand said that once he wrapped, his hair grew back pretty fast.

“You know what’s funny?” Bertrand said. “My hair grows insanely fast so it was really only like two months where I had an actual buzz cut. After that, it just looked like I had a little short haircut. So it actually wasn’t that bad. It was pretty much just the filming of the show. Then I want to say a month after filming the show, my hair was pretty much just a regular haircut.”

With Cobra Kai fans binging season 4 over New Year’s weekend, they’re already looking ahead to season 5. Netflix greenlit Cobra Kai Season 5 before season 4 even aired. Even Eli’s hair would be a spoiler though.