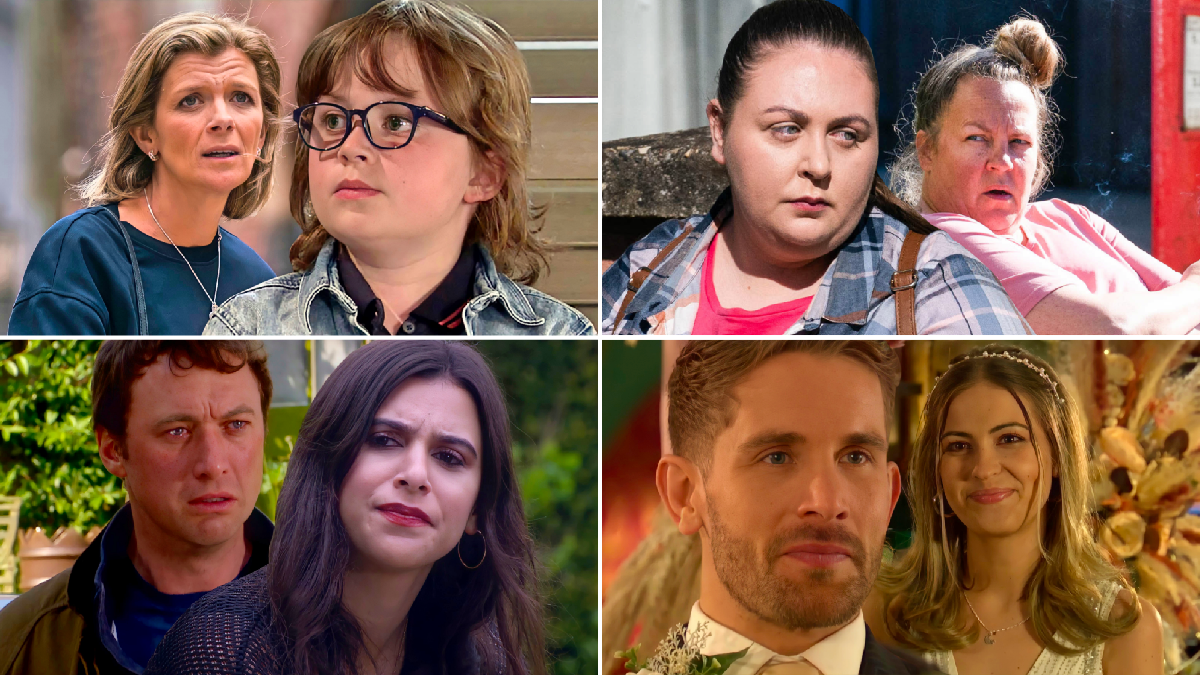 There are shocks, concerns and worries aplenty in the land of soap next week, as schemers go too far, while others vanish without a trace!

But who goes missing?

Sam Blakeman, of course! Well, in a manner of speaking! The little lad, who has a penchant for doing a disappearing act, vanishes without a trace, leaving Nick Tilsley and Leanne Battersby worried sick. But is all as it seems?

Liam Cavanagh, meanwhile, goes off the grid, which inadvertently gives Meena Jutla yet another opportunity to play the hero, as she tracks him and down and returns him to Leyla Harding.

And Meena’s not the only schemer up to no good this week, as Summer Ranger enacts her sick revenge plan on Brody Hudson, as the unmissable wedding arrives. But just what has she got in store for her fiancé?

Bernie Taylor, desperate for more diet pills, is forced to take a pregnancy test. But is she pregnant? That is the question!

Coronation Street and Emmerdale remain must-see telly, so much so you have to catch them on the telly, as and when they air, since ITV ditched the box-set format following the final of Euro 2020.

EastEnders, however, continues to stream each and every Monday on iPlayer until the end of the Tokyo 2020 olympics, meaning that you’ll be able to binge all of next week’s action in one go!

Hollyoaks, meanwhile, will air as usual on Channel 4 and E4 respectively.

But just what has soapland got in store for you next week?

Nick is over the moon when Natasha asks if Sam can stay with him for the week. Sam, similarly happy, wastes little time in putting up his astronomy posters in the bedroom, but he is later worried that he’s upset Leanne. Nick suggests he remove the posters, but Leanne won’t hear of it, reiterating that she wants him to feel welcome. Sam, touched, gives her a hug. Afterwards, Sam wanders onto the balcony, with his headphones clamped to his ears. Nick, unable to find his son, jumps to conclusions, and comes to believe that he’s missing.

Curtis receives a phone call and makes a swift exit, which he claims was in relation to a dentist appointment. Debbie, however, reckons she saw him at the bistro with a young woman. Steve, desperate to find out what’s going on, confronts Curtis, who later breaks up with Emma! The young man later come clean to Steve, revealing a huge secret in the process, but just what is he hiding?

Fiz hits it off with a bloke named Phill, and Tyrone is put out when he catches the two of them having a meal together. With things having gone quite well, Fiz asks her ex to look after the girls so that she can go on a second date, but he refuses, claiming he’s taking Alina out for dinner. After getting wind that Fiz will be there with her new fella, Ty takes Alina to the Bistro, but when he attempts to pay the bill, his card is declined, just as he’s making snide remarks at Fiz! Phill, being the bigger person, pays Tyrone’s bill, but Tyrone is not very pleased, and lashes out, taking a drunken swing at Phill!

Callum acquires details for Simon Atmore, the man responsible for Paul’s murder. He realises that Ben is agitated, and refrains from giving his beau the information. Ben, however, later finds the piece of paper with the deets, and sets in motion a plan to meet with this Simon. Callum pleads with Ben to stop, but Ben makes it clear he’ll do anything to get revenge. Callum, desperate, asks Phil for help, telling him he’s got the number of Paul’s killer. Phil, however, tells Callum to sort it on his own. Simon, meanwhile, waits for his probation officer, but realises something is wrong, as he steps back into the alley.

Bernie receives more diet pills from Tiffany. They’re dangerous especially if she is pregnant. Tiffany, desperate to help, suggests Bernie take a pregnancy test to find out for definite if she is actually pregnant t, and she even buys the test herself. Rainie wants to be there when the test is done. However, Keegan assumes the pregnancy test is for Tiff, but Bernie eventually blurts out the truth to her brother!

Frankie’s driving lessons commence, but she’s filled with nerves after Mick suggests places to go. Mick, meanwhile, tells her the paternity of Linda’s baby, and later, he lets Linda know that he’s let Frankie in on their secret.

Liam has gone missing in the wake of Leanna’s death, but with David concerned for Leyla’s wellbeing, Meena is soon getting fed up. Therefore, she resolves to find Liam herself, and she succeeds, locating him outside the crematorium. She feigns emotion, and suggests that he clear out his daughter’s belongings given that he’s struggling to escape the memories. Her plan works, as she returns to the village with Liam in tow, and enjoys playing the hero. Leyla, however, is seething with Meena’s idea to dispose of Leanna’s belongings.

Jacob berates Liam for getting rid of Leanna’s stuff, and accusations fly between the two. Leyla offers to leave Liam alone, but he wants her to stay. Jacob, meanwhile, wants to help with the funeral arrangements, but Leyla’s not sure that’s a good idea. She ultimately agrees to let him assist, but only as long as they keep it a secret from Liam.

David makes a comment about Faith, Brenda and Eric’s unusual living arrangements, and Mackenzie overhears, and proceeds to make some coded remarks of his own. Brenda pulls a muscle while lifting some boxes, and Faith gives her a massage. Mackenzie arrives, and overhears some intriguing conversations between the two women! Sarah, however, later catches Faith talking about death, and asks her if her cancer has come back.

Ben is not being truthful with Aaron about his life, and soon enough, everything becomes clear.

Summer plans on exposing Brody on what should be the happiest day of his life, but her grand plans swiftly begins to fall apart, forcing her to improvise. What does she have in mind? That remains to be seen, but the event in question sends shockwaves through the village, as Brody is left in turmoil. And his suffering is far from over, as a shocking new accusation is brought to light, leaving even Sienna in shock.

Summer takes her revenge to whole new extremes in the wake of the wedding, but she soon has to think on her feet when an innocent bystander is caught up in the crossfire of her scheming!

Nancy takes a trip down memory lane with Darren, but it seemingly has the opposite effect, as she ends up questioning if she should’ve forgiven her beau as easily as she did. Darren seeks advice from the most unlikeliest of sources, as he has a chat with Trish, who tells him to live in the present. The legend therefore comes up with an idea, as he draws up a contract, promising to never hurt Nancy ever again!

The summer-long Game of Assassins is in its final stages of planning, but Yazz and Tom disagree on how it should be marketed, so Tom recruits Romeo to assist with bringing in more sign-ups. Romeo and Yazz’s ideas, however, continue clashing with Tom’s rules. They don’t care though, as they play the game their way!