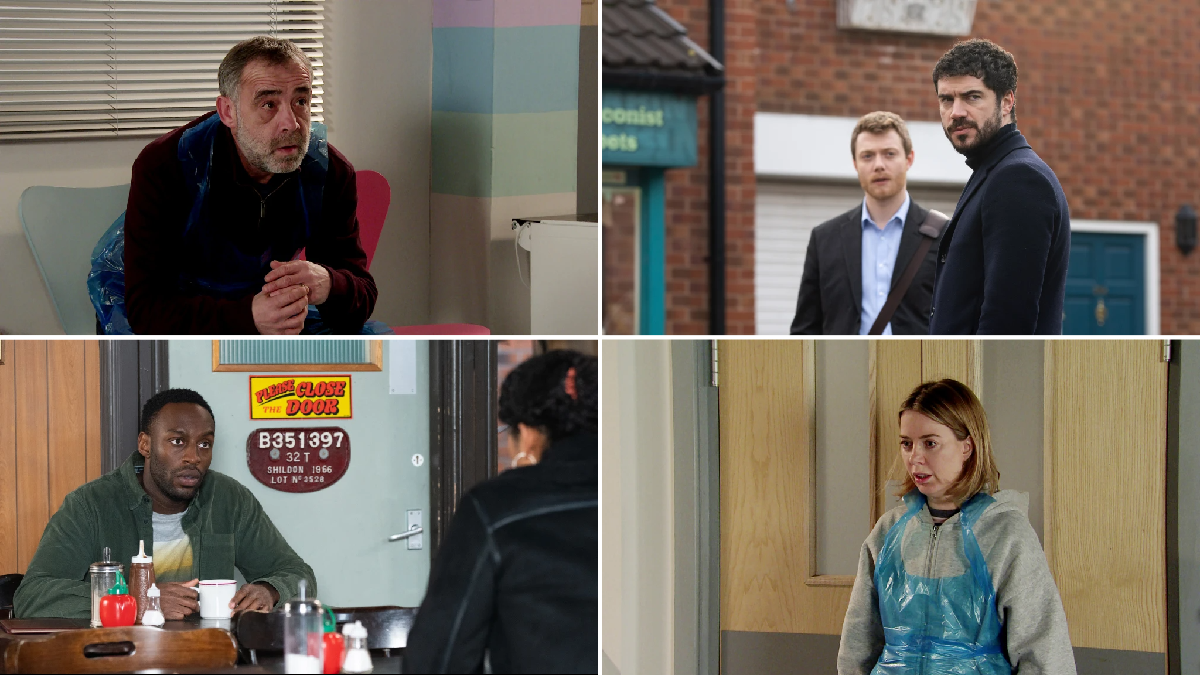 There is conflict all around in Coronation Street as Toyah Battersby (Georgia Taylor) looks like she could be about to find out the truth about Imran Habeeb’s (Charlie de Melo) baby secret with Abi Franklin (Sally Carman).

And Adam Barlow (Sam Robertson) is spiralling out of control and vows to reveal Lydia’s (Rebecca Ryan) true colours.

Abi is No-Toyah-tous for her behaviour

Abi assures the social worker that she has enrolled in rehab and will do whatever it takes to keep her baby. When Abi tells Toyah she has to prove she can offer Alfie a proper home, Toyah quizzes Imran about her ‘ex client’. With his mind whirring, Imran guesses she’s talking about Abi.

Imran tracks Abi down at the hospital, where she admits that he’s the father of her baby. In shock, Imran asks to see his son. But as they turn to see Toyah watching from the corridor, will an emotional Imran blurt out the truth?

Daisy apologises for her jealous behaviour, but when Daniel reveals that Nicky is applying for a teaching assistant post and Max will be in her class, Daisy forms a plan.

As Daniel helps Nicky prepare for her interview, Nicky asserts that she wants to keep her sex worker history under wraps and doesn’t want Daisy to find out.

Michael is delighted when Grace turns up for Glory’s birthday, while Ed and Aggie share worried looks. What does she want?

When Laura admits her pain is getting worse, a guilty Gary urges her to cancel the PI and see the doctor instead.

When Tracy reveals her plans for some mum and daughter time, Amy’s gutted, realising she’ll have to cancel her night with Jacob.

Asserting it’s time to tell Michael, they break the news that Grace is blackmailing them and the only reason she’s back is for more money, not because she wants to see Glory. How will Michael react? And what will Grace have to say when confronted?

Amy tells Jacob she’ll try and swerve her parents so they can meet up later. But when she tells Steve she’s off to Emma’s, he reveals he has just seen her heading to the tram station. Thwarted, Amy dashes out to the ginnel and explains to Jacob that she can’t see him as her dad’s at home. Jacob heads off, fed up.

Nicky confides in Daniel that her trial session with the class didn’t go well. Daniel confides in Daisy that Nicky failed to get the job. Daisy masks her relief.

Sick of being treated like the bad guy, Adam knocks back drinks and flirts with a girl, telling her his wife died in a car crash. Having received a text from Daisy, Daniel arrives and explains that Adam’s wife is still very much alive. Drunk and morose, Adam announces he’s going into town.

After seeing Abi’s story in the Gazette, Debbie demands answers, assuming the baby to be Kevin’s. But Abi hurries out, explaining the baby is having an operation today.

As Abi waits for news, she’s stunned to see Kevin in the hospital corridor. Kevin takes her in his arms as Abi breaks down.

With Kevin assuming the baby is the result of her one-night stand with Tez, Abi goes along with the lie.

Steve is not feeling Amy-able

Amy arranges lunch in the bistro with Steve and Tracy, but when she arrives with Jacob in tow, their jaws hit the floor. Tracy threatens to leave but Steve points out that Amy’s 18 and whether they like it or not, she’ll see who she wants.

Leanne is horrified to spot them all with Jacob, pointing out he almost destroyed her family. With the meal over, Amy and Jacob admit they’re in love. How will Steve and Tracy react?

Outside, Steve and Tracy are horrified to see Jacob punching Simon. Steve asserts she needs to choose between Jacob and her family. What will Amy do?

Under Daniel’s instruction, Adam calls to see Sarah, but clocking his hungover state, she sends him packing. Spotting Lydia, Adam storms over, telling her he’ll prove what a liar she is.

Carla advises Sarah to think hard before cutting Adam out of her life as she’s not sure Lydia can be trusted. Will Sarah take heed?

Imran calls at the garage and reminds Kevin that no matter what the circumstances, Abi’s entitled to maternity pay.

As Maria poses for photos in Victoria Garden, her nemesis, Bernard, appears with James and Ashley. The journalist turns his attention to the two footballers, with Maria forgotten.

When Maria admits she may as well throw in the towel as Bernard is going to win with his cheap tactics, Phill reckons he may be able to help.