Dan Walker left some BBC Breakfast viewers confused today as he sported a daring new look while presenting the BBC show. The presenter shared a picture he had taken of his double-breasted suit ahead of BBC Breakfast with his Twitter followers and explained there was a huge problem with the outfit. Viewers questioned the “uncomfortable” choice as they teased Dan’s new look on social media.

Sharing a picture of his wardrobe choice, Dan detailed he was struggling with his choice of outfit.

He tweeted: “Test driving a little bit of double-breasted action this morning.

“Im having to sit up very straight to prevent the spread #BBC Breakfast.” 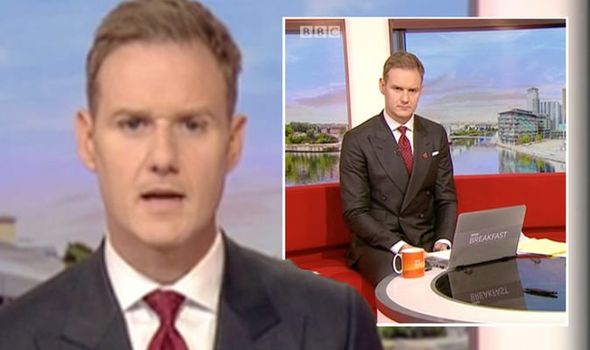 One said: “@mrdanwalker appears to have borrowed @Jacob_Rees_Mogg suit.”

“It’s back to the dapper 1940s is it still called the Rees Mogg look? Just asking …,” another shared.

A third tweeted: “You are looking quite uncomfortable sitting on the red sofa though… is it worth it?”

Another joked: “You look dapper, but verging on looking like you work for Virgin Airways.”

“You can unbutton it when you sit down dan!” Someone else suggested.

“Why is Dan wearing a suit from the 70’s this morning? #BBCBreakfast,” a sixth asked.