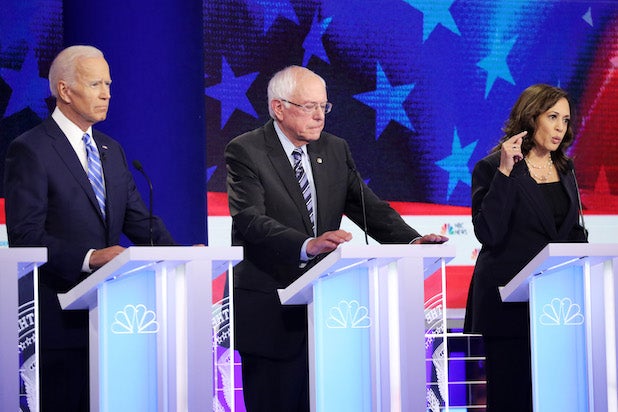 The second night of the first Democratic debate for the 2020 U.S. presidential election bested the first by 18%, drawing 18.1 million TV viewers across NBC, MSNBC and Telemundo versus Wednesday’s 15.3 million. Another 9 million checked out the live stream.

Last night’s showdown — which boasted a lineup including former Vice President Joe Biden, Sens. Bernie Sanders and Kamala Harris and Mayor Pete Buttigieg — was the most-watched Democratic primary debate ever, topping the first Dem faceoff of the 2016 cycle, which aired on CNN and posted 15.7 million viewers.

Thursday’s debate also hit a record among adults 25-54, putting up 5.3 million viewers in that key demo vs. Wednesday’s 4.3 million across all three networks. Among adults under 50, the number for Night 1 was 4.4 million, with Night 2 hitting 3.7 million.

Nights 1 and 2 of the debate were easily the most-watched programs on television Wednesday and Thursday. However, both came in lower than the kickoff to the 2016 election cycle, which of course had the Donald Trump factor — but fared better than the debates leading up to the 2008 and 2012 presidential elections.