Plus: Amy Klobuchar blasts Jay Inslee for saying he’s the only candidate who has “advanced the ball” on women’s reproductive rights 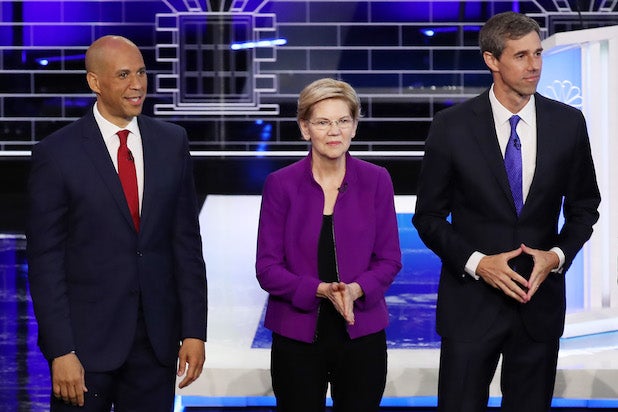 Night one of the first Democratic debate is in the books and the key moments from Wednesday’s face-off between the party’s presidential hopefuls in Miami include mic issues that drew criticism from President Trump, former Texas Rep. Beto O’Rourke and New Jersey Sen. Cory Booker both busting out their Spanish and more than one spat.

See TheWrap’s biggest takeaways from the first night of the 2019 Democratic debate below.

1. Cory Booker and Beto O’Rourke’s dueling Spanish — after Booker made a meme-worthy face in response to O’Rourke answering in Spanish.

The New Jersey senator gave what some Twitter users labeled “side-eye” to the former Texas representative for answering his first question of the night in a combo of English and Spanish. And then Booker came back around to use Spanish in one of his responses later. Read more about that moment here.

At the top of the second half of the debate, the NBC-hosted event suffered mic issues, in which the moderators from the first hour could still be heard off camera, causing new moderator Chuck Todd to go to a commercial break while they were resolved. All in all, the network lost about ten minutes of debate time due to the mic issue and Trump took note of the technical difficulties on Twitter.

“@NBCNews and @MSNBC should be ashamed of themselves for having such a horrible technical breakdown in the middle of the debate. Truly unprofessional and only worthy of a FAKE NEWS Organization, which they are!” President Trump tweeted.

We’re pretty sure that when the Washington governor used that expression while saying that McDonald’s CEO is making “2,100 times more than the people slinging hash at McDonald’s” he wasn’t referencing marijuana  — or “SpongeBob SquarePants” — but that didn’t stop Twitter from going there with jokes like the ones below.

4. Amy Klobuchar calls out Inslee for saying he was the only candidate on stage who has “advanced the ball” on women’s reproductive rights.

Almost every candidate erupted in reaction to Inslee’s assertion but it was the Minnesota senator who said, “I just have to say there’s three women up here that have fought pretty hard for a woman’s right to choose.”

5. Julian Castro and O’Rourke come to blows over immigration.

Castro spared with O’Rourke for not calling to end Section 1325 of the Immigration and Nationality Act.

“I think it’s a mistake, Beto,” the former Housing and Urban Development secretary said, addressing O’Rourke directly in the first major one-on-one discussion of the night. “If we truly want to change the system, we need to repeal that section. If not it might as well be the same policy.”

“As a member of Congress, I helped to introduce legislation that we don’t criminalize those who seeking asylum and refugees,” O’Rourke responded.

“I’m not talking about that,” Castro interrupted. The candidates then argued over each other about policy, causing the moderators to halt the conversation.