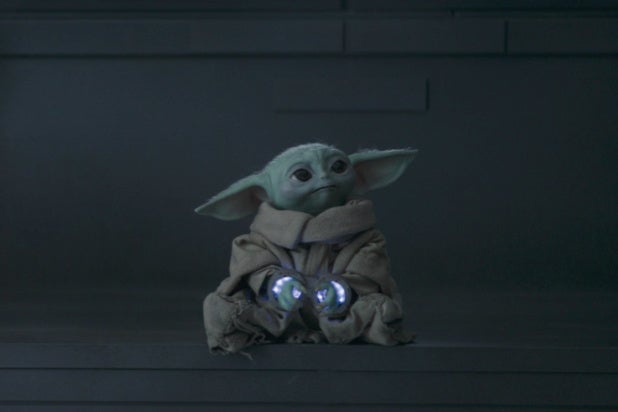 Well. That’s another season of “The Mandalorian” down, and as with all things “Star Wars” these days it couldn’t help but attempt to dazzle the audience with references to the original trilogy, including one particularly disturbing cameo.

But we’ll save the in-depth discussion about that horrendous CGI Luke Skywalker in another article. Right now I just wanna talk about Baby Yoda (I’m not calling him Grogu), and what just happened with him.

So in the “Mandalorian” finale, Mando (Pedro Pascal) and friends invade Moff Gideon’s (Giancarlo Esposito) flagship to try to rescue Baby Yoda after he got captured last week. They manage to complete their objective, but they’re gonna have a tough time fighting through Gideon’s dark trooper droids.

Or so they think, until a mysterious stranger lands on the ship with an X-Wing, pulls out a green lightsaber, and cuts all those droids down. It’s Luke Skywalker (Max Lloyd Jones wearing young Mark Hamill’s poorly rendered face) here to save the day, as always.

Luke tells the crew that he should take Baby Yoda with him, and continue his training. And after some discussion, they let him do it. So this CGI Luke flies away, Baby Yoda in tow, with Mando looking on emotionally.

This represents a major change to the dynamics of “The Mandalorian,” because the two have been riding around the galaxy together since the end of the first episode of the series. And I have to imagine that Baby Yoda won’t be back any time soon, because I have a hard time believing that fans would put up with seeing that egregiously terrible CGI de-aging on Luke with any regularity.

But I have just as hard a time believing that they would just drop Baby Yoda completely. Even though this show is called “The Mandalorian,” Baby Yoda is the star. He’s a money-making machine for Disney, and so they’ll want to milk that cow for all it’s worth.

So as I see it, there are three possibilities for Baby Yoda’s future.

First: “The Mandalorian” could do a big time jump, and pick back up around when Ben Solo becomes Kylo Ren and Luke’s Jedi academy gets burned down. The Mando could swing by to pick up Baby Yoda and go on the run again 20 years later, maybe with First Order folks chasing them around.

But I don’t think that’s super likely, since Disney just announced a big crossover event between “The Mandalorian” and it’s upcoming sister series — “Rangers of the Republic,” “Ahsoka” and, presumably, this new “Book of Boba Fett” thing that was announced at the end of this episode — for next winter. So they would need to keep all these shows on the same timeline, and it would be weird for all of them to pick up two decades later.

My second possibility I think is the likely answer: Baby Yoda will move over to the “Ahsoka” show. Dearest Ahsoka (Rosario Dawson) seems like the best candidate to run into Luke in the near future, and she seemed to quickly develop a bit of a rapport with Baby Yoda during her appearance during “The Mandalorian” this season. So it’s easy to envision “Ahsoka” being the Jedi version of “The Mandalorian,” with Ahsoka taking on the same caretaker role that Mando has.

Third: he could move over to one of the many other new “Star Wars” shows that are on the way.

Unfortunately, any guesses about what will happen with Baby Yoda going forward do seem likely to involve seeing that hideous CGI Luke Skywalker again. One can only hope they’ll keep that to a minimum if they have to do it again.

Whatever the answer, hopefully we’ll find out soon enough.