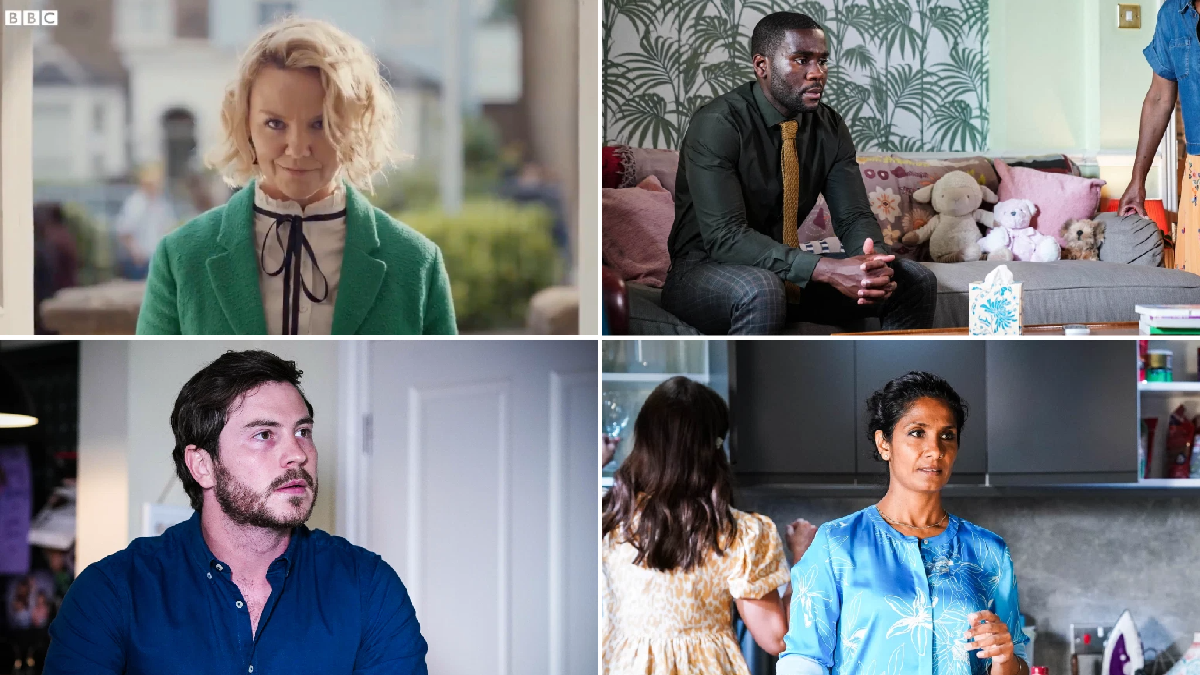 Autumn is coming in EastEnders and true to form, there’s a lot of drama on the way.

From returns to fires, autumn is set to be a season that will change Walford residents’ lives.

To keep up with all the goings on, we’ve compiled this handy guide to bring you all storylines set to air over the next few weeks.

Oh, and did we mention, Janine (Charlie Brooks) is back?

Let’s not waste any time, here are your EastEnders spoilers as autumn arrives in Albert Square…

Yes, just in case you have been living under a rock, Janine is back!

A new trailer was released a few days ago that shows Janine back in Walford and from previous spoilers, we can safely confirm her return will be explosive.

A determined Isaac will try and get his teaching job back but when Sheree lies about the school wanting the online abuse to calm down before he returns, he’s left crushed.

Later on, Patrick (Rudolph Walker) suggests maybe Trinidad is the best place for Isaac after all, and he wants to leave with them, much to Sheree’s pleasure.

Could we be about to say goodbye to this family?

Or will Isaac stand his ground and tell his parents he wants to stay in Albert Square?

When will Ruby confess about lying to the police?

After lying to the police about Stacey (Lacey Turner) pushing her down the stairs, Ruby revealed the truth to Jean (Gillian Wright) after spending time with her.

We know Louisa Lytton will go on maternity leave soon ahead of the birth of her first baby, but will Ruby’s final scenes air in autumn?

How much longer can she keep the truth a secret?

When will Stacey return?

Lacey Turner has been away from Albert Square for a few months, but could she return as Stacey in autumn?

Currently in prison, we already know Stacey has gotten into a fight which saw Jean’s visiting hours cancelled, but what mindset will she be in when she eventually arrives back in Walford?

How much has prison life impacted Stacey?

Suki has a shock announcement for Ash

With help from Honey (Emma Barton), Suki is showing a softer, kinder (shock!) side and soon, she’ll have a shock announcement for Ash (Gurlaine Kaur Garcha).

After Ash fails her performance review, Suki feels to blame, so decides to expand her empire and buy another property to turn it into a GP surgery.

Will the start of Ash’s new career see her forgive Suki for her previous actions?

Murderous Gray will face further problems as he starts to experience money problems.

To make matters worse, Gray’s boss Laura arrives and explains he’s lost his job due to the caution he received.

Gray tries to confront Chelsea about the credit card bill, but she isn’t exactly bothered…

No job, no money, can Gray provide for his children?

Ian’s (Adam Woodyatt) been a way for a few months now and so far, Sharon’s (Letitia Dean) kept schtum about trying to kill her former best friend.

Don’t forget Phil (Steve McFadden) also had a hand in the revenge plan and as he returns from seeing Louise and Lisa, he’s immediately displeased to spot the new Arches signage.

As Ben (Max Bowden) tries to explain himself, Shirley walks in telling Phil to hand himself in for what he did to Ian.

As Sharon gets word that Shirley wants the police to know about Ian’s ordeal, she suggests to Phil they hand themselves in.

Later on, Phil calls Sharon but when she doesn’t pick up, he starts to worry she’s at the police station.

Her guilt increasing, is Sharon about to confess everything?