In case you’ve begun your winter hibernation and haven’t been on the internet in the past week, (1) good for you and (2) you probably missed the best viral video in history. Truly, Dakota Johnson and Ellen DeGeneres’ hilariously awkward discussion about birthday party invites put me six feet under. IDK if any of us can ever recover from Dakota absolutely owning Ellen on her own talk show. And now, body language expert Blanca Cobb is here to break down what Ellen and Dakota’s body language said that they didn’t.

If you didn’t watch the video yet or just want another recap so you can laugh all over again, I’m happy to oblige. When Dakota recently went on The Ellen DeGeneres Show, Ellen decided to rag on Dakota about why she didn’t invite Ellen to her 30th birthday party in October. Without letting the host get too far into her supposed fairytales, Dakota shut that down and was basically like, “Cut the cameras.” JK, but it did seem like the actress was ready to metaphorically throw hands. Ellen was not ready.

(BTW, Ellen was invited and just didn’t go. Many people are speculating that it was because she was hanging out with George W. Bush at a football game.) But let’s take a closer look at what their body language said, shall we?

From the jump, Blanca said Ellen was totally uncomfortable. She pointed out the importance of how Ellen was sitting and explained to Cosmo, “So the right leg is crossed over her left leg, and that leg—the way she has it—serves like a barrier between her and Dakota, so it’s like a psychological barrier as well as a physical barrier.”

Even more awkward, Blanca noted that Ellen was “rubbing her fingers either on the armrest or on the leg” and that means she’s “self-soothing.”

As for Dakota, Blanca said she started out feeling comfortable and leaning toward Ellen. And when Dakota explained she didn’t invite Ellen to her party last year because she didn’t think the comedian liked her, Dakota’s palms were up, showing she was being “sincere,” “candid,” and “forward.”

Ellen then countered that and was like, “Of course I like you. You knew I liked you! You’ve been on the show many times and don’t I show…like?” But Blanca noted that it’s weird Ellen didn’t smile when she said that, which is what typically happens when someone says they like someone.

At another point in the interview, Dakota mentioned that Tig Notaro was at her party and that she was her favorite comedian, not Ellen. Obviously that’s all kinds of LOL, but Blanca thought Ellen was genuinely surprised that Dakota actually said it to her face. And this was evident when Ellen “disengaged.” According to Blanca, “She turned her head, she looked away from Dakota, and then she looked down with her eyes a little bit. She was definitely disconnecting and disengaging, and obviously when you’re turning away from somebody, you don’t like what they’re saying.” 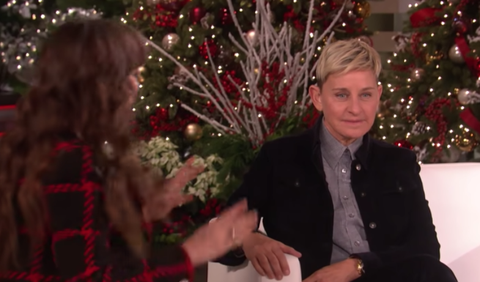 So uh, yeah, if you thought Ellen was uncomfortable about the birthday party stuff, that’s apparently nothing compared to how she felt about not being named Dakota Johnson’s favorite comedian. Life’s rough.