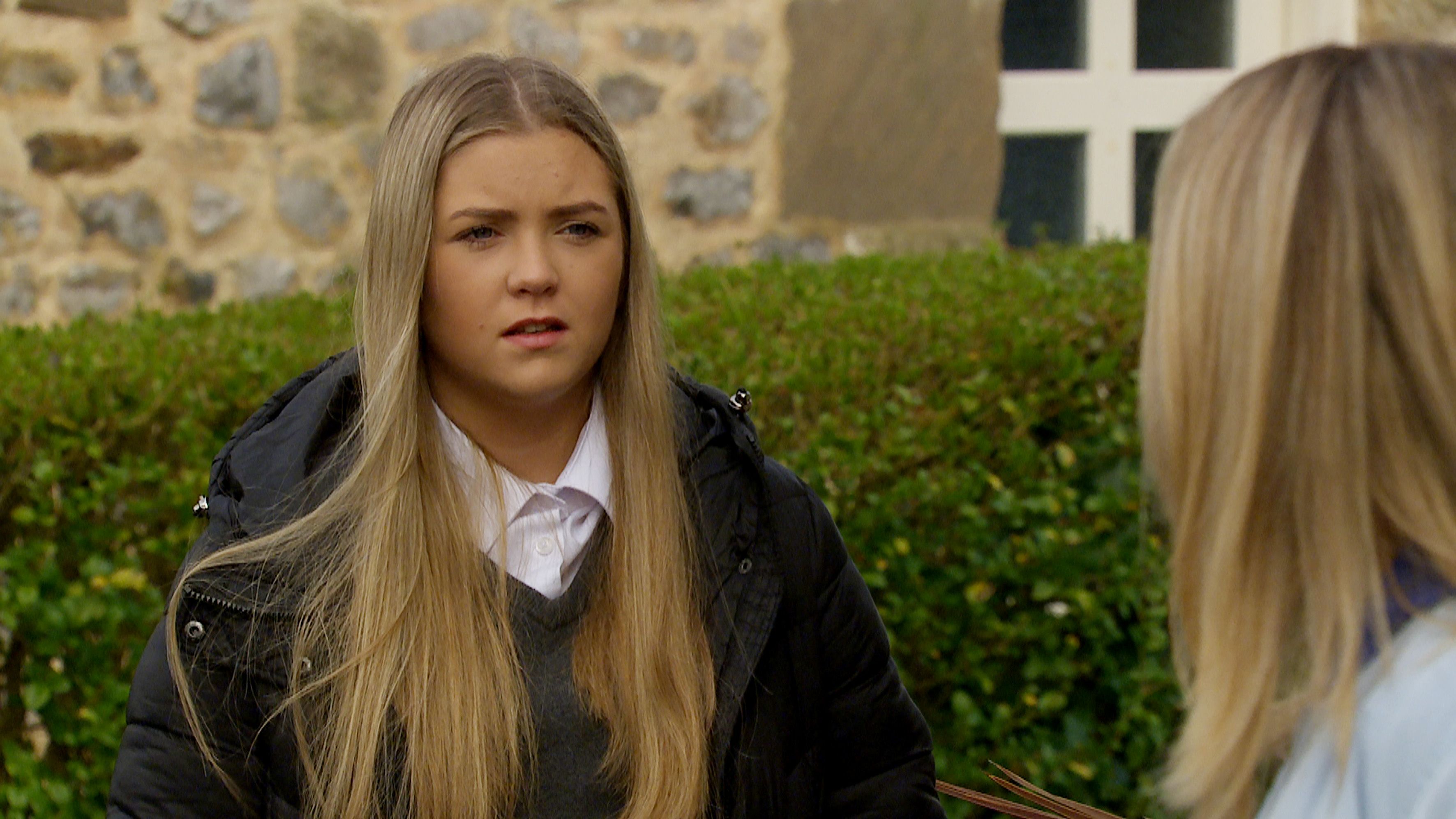 Cathy Hope (Gabrielle Dowling) was in a vile mood in tonight’s Emmerdale. At the start of the episode she was sitting in the cafe with Heath (Sebastian Dowling) trying to revise, a task made somewhat difficult by Heath strumming his guitar while Bob (Tony Audenshaw) murdered the Coldplay hit Yellow.

‘I hate Coldplay!’ Cathy ranted. ‘We’re 15, Dad. We shouldn’t even know who they are!’ Fair point, but there was obviously more going on for Cathy than just a dislike of old, tedious anthems. She accused Bob of being rude for ignoring Brenda (Lesley Dunlop) telling him it was time to take them to school and stormed out of the cafe.

Brenda was worried about Cathy’s behaviour. Bob reassured her it was just a phase, but Brenda wanted to know how long the phase might last, saying she was tired of ‘walking on eggshells’ around Cathy.

Later on, Cathy and Heath were back in the cafe revising again, and Bernice (Samantha Giles) decided to help out with some revision tips – which involved an enthusiastic rendition of Wannabe by the Spice Girls. Possibly even more cringe than Bob’s Coldplay.

‘Shut up, will ya!’ Cathy told her. ‘She’s bonkers!’ Even Heath was a bit shocked by now. ‘She’s going through the menopause – it’s made her all batty!’ Cathy insisted as a humiliated Bernice fled.

Brenda summoned Bob back over from the Woolpack and he demanded an explanation from Cathy, who refused to apologise.

‘No wonder nobody likes you,’ her brother said, at which point Cathy jumped out of her seat, grabbed his guitar and smashed it on the floor. Even she looked shocked at what she’d done and said sorry, but an outraged Bob ordered her to leave.

There have been indications that all isn’t well with Cathy previously, after she was in a foul mood at the Christmas concert and told Heath that she often felt overwhelmed.

So what’s going on with Cathy? In a storyline previously teased by Emmerdale boss Jane Hudson, ‘It’s a challenging [storyline] and I think it’s one a lot of parents will connect with. It’s one I haven’t seen a soap do before either.’

The storyline itself centres on Cathy’s hormones. Over the coming days and weeks we’ll see Cathy struggling with very heavy periods, coupled with the mood swings that have already led to the angry scenes we saw in tonight’s episode.

The topical storyline will also show how Cathy manages to get things under control after she manages to ask for help – much to the relief of those around her.