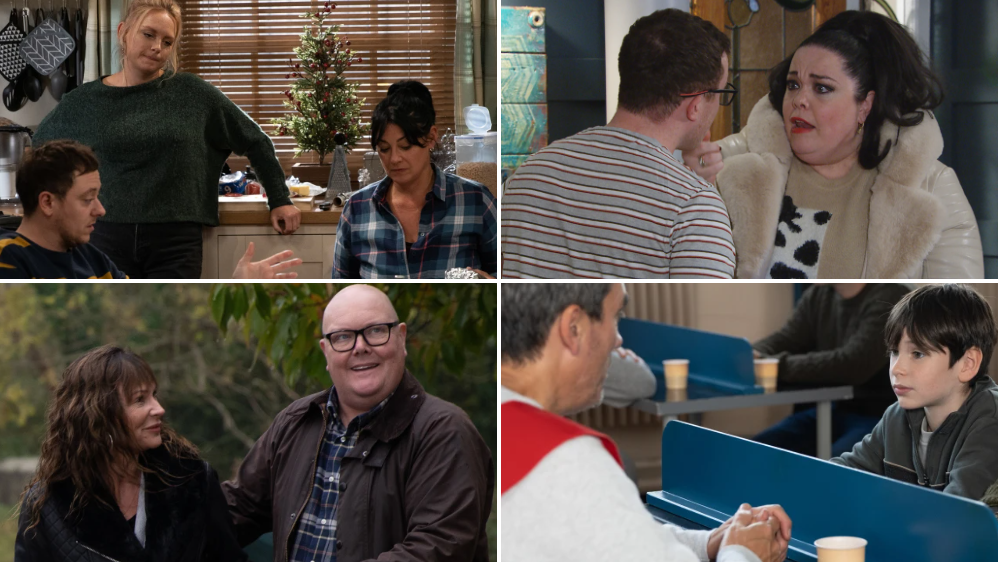 Life changing secrets come to the fore and prepare to explode in next week’s Emmerdale – and it may be too late for Chas Dingle (Lucy Pargeter) to realise on what side her bread is buttered.

She decides emphatically that Paddy (Dominic Brunt) is the man for her; and her family set-up would be a massive loss.

But as she nestles into her future, fate conspires against her, with the secret potentially set to erupt at any moment.

Moira (Natalie J Robb) knows how she feels too; the secret of Kyle’s killing of Al hangs over the family.

The pressure mounts on her to go to the police from Matty (Ash Palmisciano); but as she determines to protect him, can she keep a lid on it?

Matty does his best to persuade Moira and Amy to go to the police. When Kyle insists he can’t go to school because he misses his dad, Amy and Moira’s concerns escalate.

Amy negotiates with Kyle: if he goes to school, she’ll ask if Cain will see him. Moira’s frustrated their united front is crumbling. Later, Amy and Moira discuss the concerns about letting Kyle visit Cain.

Chas’ is emotional on finding some of Faith’s old possessions. Supported by Paddy, Chas is grateful for her family as she and Eve decorate the Christmas tree.

Later, a family dinner with Rhona and Marlon leaves Chas more in love and grateful for Paddy and Eve than ever before. After a wholesome afternoon with Paddy and Eve, Chas’ finally ready to put Al in the past and appreciate her little family.

Mandy’s horrified to find Vinny battered and bruised. Vinny apologises to Mandy for his recent behaviour. Mandy offers Vinny a room at the Dingles.

While moving into the Dingles, Mandy suggests renting Mill rather than selling it.

At Home Farm, Gabby and Dawn sift through the nanny applications. Delighted, Kim smells competition as she gives the pair their first joint task.

Dawn and Gabby pitch opposing ideas to Kim. When she conflates the two, Kim demonstrates how they could have worked together to find the best possible solution.

Marlon bumps into a weary Naomi, desperate to find work in the village, he begins to form a plan.

An utterly loved-up Paddy surprises Chas with a gift. Grateful for his endless support, Chas’ privately ashamed she nearly left him.

Meanwhile, Chloe tells Belle that Al took someone out to dinner the night Faith died and the penny drops for Belle who realises Chas never actually ended her affair with Al.

Later, Belle confronts Chas about being at Westgrove Hall Hotel with Al the night Faith died. Cornered, Chas is unable to deny the affair any longer. When Belle suggests this is why Cain killed Al, Chas wonders whether to admit to believing this theory too.

Chas is manic with fear, terrified Belle will tell the family. Back in the pub, Chas is delighted to hear Paddy’s booked them a surprise getaway.

Meanwhile, Belle breaks down in front of Moira admitting what she knows. Moira is furious and begins to put two and two together over Cain’s imprisonment and Al’s death

In true Kim Tate-style, the nanny interviews at Home Farm are a formal affair. Despite Billy’s reassurance, Dawn’s still uncomfortable with someone else looking after their kids.

The panel interviews a strict, old-fashioned nanny. To Kim’s surprise, Gabby and Dawn refuse to employ her and press onto the next unlikely candidate.

The panel, except Kim, are impressed with Samantha and intend to deliver the good news after they’ve interviewed one final candidate.

The competition for Home Farm’s Nanny gets hotter: when both Dawn and Gabby are both impressed with Nicky – a handsome male nanny. When Samantha declines the job, Gabby’s delighted to offer Nicky the job.

Nicky accepts and agrees to meet her children. Whilst Kim and Gabby are excited for this new chapter, Dawn still needs a little convincing about having a nanny.

Chas and Charity are delighted to have Marlon back at the pub and have installed all the necessary equipment for his return. Naomi’s thrilled when Marlon offers her a job as his assistant starting from tomorrow.

The next day Kyle’s excited to visit Cain. When Matty continues to push for them getting him professional help, Moira and Amy worry he might be right. Unbeknownst to them, Kyle has overheard their entire conversation.

In the prison visitors room, riddled with guilt, Kyle breaks down when he sees Cain. When Kyle struggles to contain his emotions, Amy and Cain worry he will reveal their secret. Cain worries if it’s a good idea for him to have visited.

Marcus is delighted when Ethan agrees that they should find a place on their own.

Chas prepares for her trip away with Paddy. Relieved they are both getting away from it all

Seeing Nicky make an instant connection with Clemmie, Dawn’s worries subside and she offers him the job.

Ethan invites his boss for a meal. Ethan’s flustered as Greg arrives but placated by calming Marcus. Greg enjoys his lunch but has he another agenda?

Marlon relishes being back in the kitchen as he returns to work at the Woolpack.

As the first lunch orders come in, Naomi and Marlon get to work. Rhona’s happy to see Marlon back in his element.

Moira rushes off to see Cain at the prison

When Bear bails as the Shop’s Santa, David steps up which leaves Victoria impressed and David hopeful. But will David misread her enthusiasm for something more?

Marcus attempts to dismiss his own misgivings.