Chas (played by Lucy Pargeter) has been struggling recently in light of discovering her mother, Faith Dingle (Sally Dexter), is dying of terminal cancer on Emmerdale. To comfort her through her pain, Al (Michael Wildman) is more than happy to play the hero of the hour and in this week’s episodes of the ITV soap, they end up sharing a kiss. However, when he tries to balance his time between the Woolpack bar manager and his girlfriend Kerry (Laura Norton), the villain could end up making a huge mistake.

The drama continues in next week’s instalments of the village-based soap as Chas feels like her life is spiralling out of control.

With the beloved character feeling as if she doesn’t have much support at home, she turns to Al for comfort once more.

Meeting in the woods, the pair end up in a steamy embrace and when they kiss again, Chas suggests they book a hotel to spend the night together.

It seems Chas is excited at the prospect of playing with fire but the next day, her mother ends up taking a turn for the worst.

When Faith collapses as a result of her latest round of chemotherapy, the bar manager cuts ties with her forbidden lover. 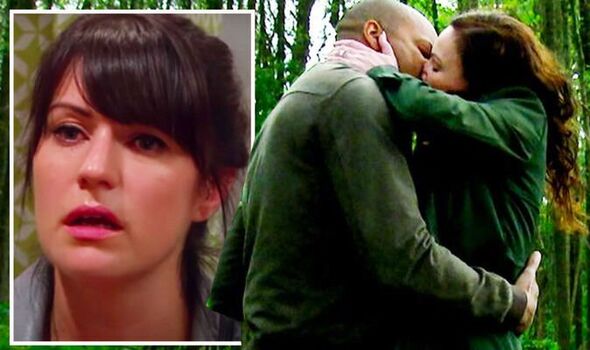 Feeling immense guilt over betraying her husband and her family, Chas decides to jump on board with an idea her mother has.

Faith thinks it would be great to celebrate Paddy Kirk’s (Dominic Brunt) birthday with a proper knees-up, one of the last she will be able to enjoy.

As the plans are in full swing, Al and Kerry walk into the pub where Chas is having a discussion with her husband Paddy.

The air is full of tension as Chas and Al try not to give each other too much eye contact and later, the villain admits he was jealous of seeing his mistress with her husband.

Trying not to let her feelings get the better of her, Chas tells her forbidden lover she felt nothing seeing him with Kerry.

As he takes this as a rejection, Al spends the night romancing his girlfriend Kerry, who later goes to tell Chas all the details.

The bar manager feels incredibly awkward hearing how Al swept Kerry off her feet and later on the Main Street, she has it out with the businessman.

They confront each other about their feelings for one another, stating they are both jealous of seeing the other with their respective partners.

It seems this could result in the pair finally sleeping together after years of the chemistry between them lingering in the background.

Of course, Chas would feel guilty about cheating on Paddy and she would try to stop any sort of contact with her forbidden lover in the future.

Unfortunately, just as it seems she has got Al out of her mind, she could begin to experience symptoms of morning sickness.

Doing a test could confirm she is expecting a baby and having not had sex with Paddy in a while, she would know exactly who the father is.

Knowing she needs to speak with Al, Chas would arrange a meeting with him to talk about what they should do with regard to the baby.

As the businessman sits down and hears what the bar manager has to tell him, he could tell her Kerry has just said she is expecting as well.

Clearly, Kerry would be a lot happier with the news than Chas would be but will this change her mind about what to do?

If both women complete the pregnancy through to full-term, Al would have two children to look out for and payout for.

Even at this point, Kerry might not have any idea Chas has given birth to her child’s sibling but it might not be too long before the truth prevails.

Unable to harbour the secret anymore and making plans to have the baby adopted, Chas could explain she cheated on her husband.

As the village begins to realise Al is the father of both children, he could become public enemy number one and Kerry would throw him out.

Will he be able to play a part in both babies’ life or will he lose contact with both of them as Kerry keeps him away from their child and Chas gives theirs up for adoption?

The actor who plays Al, Michael, has spoken about whether his character would ever come clean about having feelings for Chas.

Michael said: “I doubt very much he’s going to come clean. I don’t know. There’s got to be a time when he will come clean with someone he’s cheated on.

“At this moment in time, he gets to a point where he’s not getting something that he’s looking for in the current relationship that he’s in, and that’s where he always goes wrong.

“At this moment in time that’s where Chas comes along and offers him the kind of comfort and support he’s not getting somewhere else.

“That’s his biggest downfall,” he explained.

Emmerdale airs weekdays at 7:30pm on ITV, with an hour-long episode airing on Thursdays.