Will Smith doesn’t seem like a violent guy. Only in movies, where he’s an action hero. But, his Fresh Prince raps were always more comedic than the gangsta rap of the ’80s and ’90s. In his new autobiography, Will, Smith details some of the more harrowing incidents in his past. One occurred on the set of his TV show, The Fresh Prince of Bel-Air.

Smith would lend many comedic improvisations to The Fresh Prince of Bel-Air, just as he would movies like Bad Boys and Men In Black. At the beginning of the show, this was shocking to NBC executives.

“It was a Wednesday,” he wrote. “We were struggling on set, trying to make a scene work. We all felt it — the writing wasn’t landing as authentic or funny. So I took it upon myself to begin making changes to the scene. When the producers came down and saw all of the ‘unilateral’ adjustments I’d made, they immediately called the leadership at NBCP (the production arm of the network) who demanded that we stop production and come to the office right now.”

Fresh Prince of Bel Air creator Benny Medina, producer James Lassiter, Smith and producer Jeff Pollock attended the meeting. When the executive, whom Smith did not name in the book, stood for the meeting, Smith interpreted that as aggression. After the meeting he would say he thought the executive was going to take a swing at him.

“The executive was standing, leaning against his desk, facing the two couches,” he wrote. “His posture suggested that he was in charge and that he was pissed. We entered and took our seats in front of the ‘Headmaster.’ JL and Benny sat on one couch, and me and Jeff Pollack sat facing them on the other.”

Will Smith defended himself

The executive began to chastise Smith for changing the words in the Fresh Prince of Bel-Air script. The combination of standing and saying things like “So, you’re a big man, huh?” put Smith on edge.

“I didn’t totally understand the question, so I didn’t respond,” he wrote. “He begins to circle the perimeter of the two couches. It felt like the scene from New Jack City when Wesley Snipes was trying to get somebody to explain to him how the Carter got infiltrated.”

“I jump up and spin, stepping around the couch, coming face to face with the exec,” he wrote. “‘What the f*** you wanna do, bitch?’ I sneered.”

The executive started backing down, but Smith was already riled up.

It turned out the reason the executive was standing was because he had just had major lower back surgery. Smith forced him to sit down, and he painfully did so. After the meeting, executive producer Quincy Jones smoothed things over.

Smith wrote, “‘It’s fine — people cuss each other out all the time,’ Quincy said. ‘Just never put your hands on nobody. I talked to ‘em, it’s good.’” 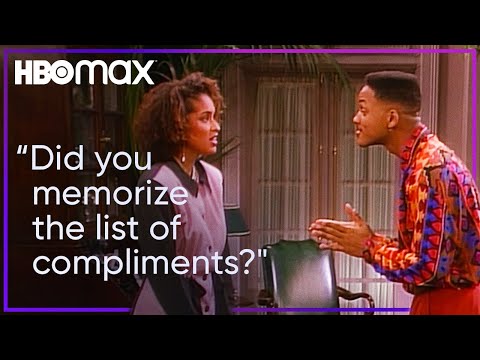 As Smith recalled, Jones said, “‘Don’t nobody know what the f*** you’re supposed to say better than you. If they could do what you do, they wouldn’t have hired you. You say what you wanna say, the way you wanna say it. And when somebody has a problem with it, tell ‘em to call me.’”

The Fresh Prince of Bel-Air is now streaming on HBO Max.