GB News’ Great British Breakfast returned this today as Kirsty Gallacher and Nana Akua hosted the day’s morning discussion. However, some viewers were less than impressed with some of the show’s takes on the headlines as they compared the new news channel to BBC and accused it of sharing “Government propaganda”.

One frustrated viewer tweeted: “An apology to those who said @GBNEWS was no different to BBC etc… You were right… Although there’s a very small percentage of opposite views, I see the vast majority are simply pushing the vaccines instead of questioning them… Switched off now….”

Another wrote: “Viewing figures suggest that @GBNEWS has become the mouthpiece for the #KBF cult.

“Its anti lockdown, anti-government has driven viewers away. I’m disappointed as I had high hopes but I’ve tried numerous times to watch and I can’t get into it. It’s like BBC News, both unwatchable.”

While a third said: “I don’t watch it but this @GBNEWS appears to be a government propaganda arm. Just like the BBC Thought they were meant to be fresh insight?” 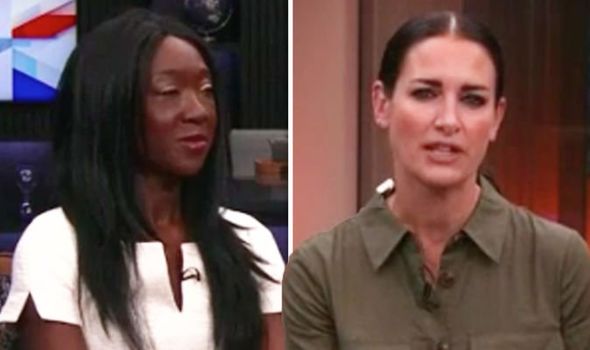 Someone else shared: “And I was just starting to watch and enjoy @GBNEWS but giving opinions without supporting facts from someone in such a privileged position is no better than the BBC. Oh well, I’ll keep looking for a sensible and serious news outlet.”

A fifth added: “What is the point of them shouting from the rooftops that they are different if they employ BBC tactics?”

However, other viewers praised GB News for its original news topics and discussions.

One said: “BBC’S extreme woke worldview and ITVs sensationalism was draining. @GBNews pro-free speech and variety of calm views is a breath of fresh air.#GBNewsWins #GoWokeGoBroke.”

Another said: From day one I’ve watched GB News. It’s so refreshing to watch honest and unbiased news topics.

“@GBNEWS who are certainly leading the way and promoting free speech. Since GB News launch I will not watch any biased news such as the BBC news.”