Harley Quinn has really shot up in popularity following 2016’s Suicide Squad, but she’s always been a fan-favorite. And for good reason; she’s wildly entertaining, smart, and actually really good at what she does (being a lovable villain). Her ties to the Joker are often engrained in the public’s perception of her since he is a major part of her origin story. But a major relationship of hers is with Poison Ivy.

However, the comics nor series that have shown them before have really done their relationship justice. But that’s something that DC Universe’s Harley Quinn series fixed. [Spoiler alert: Spoilers ahead for Harley Quinn, through Season 2]. 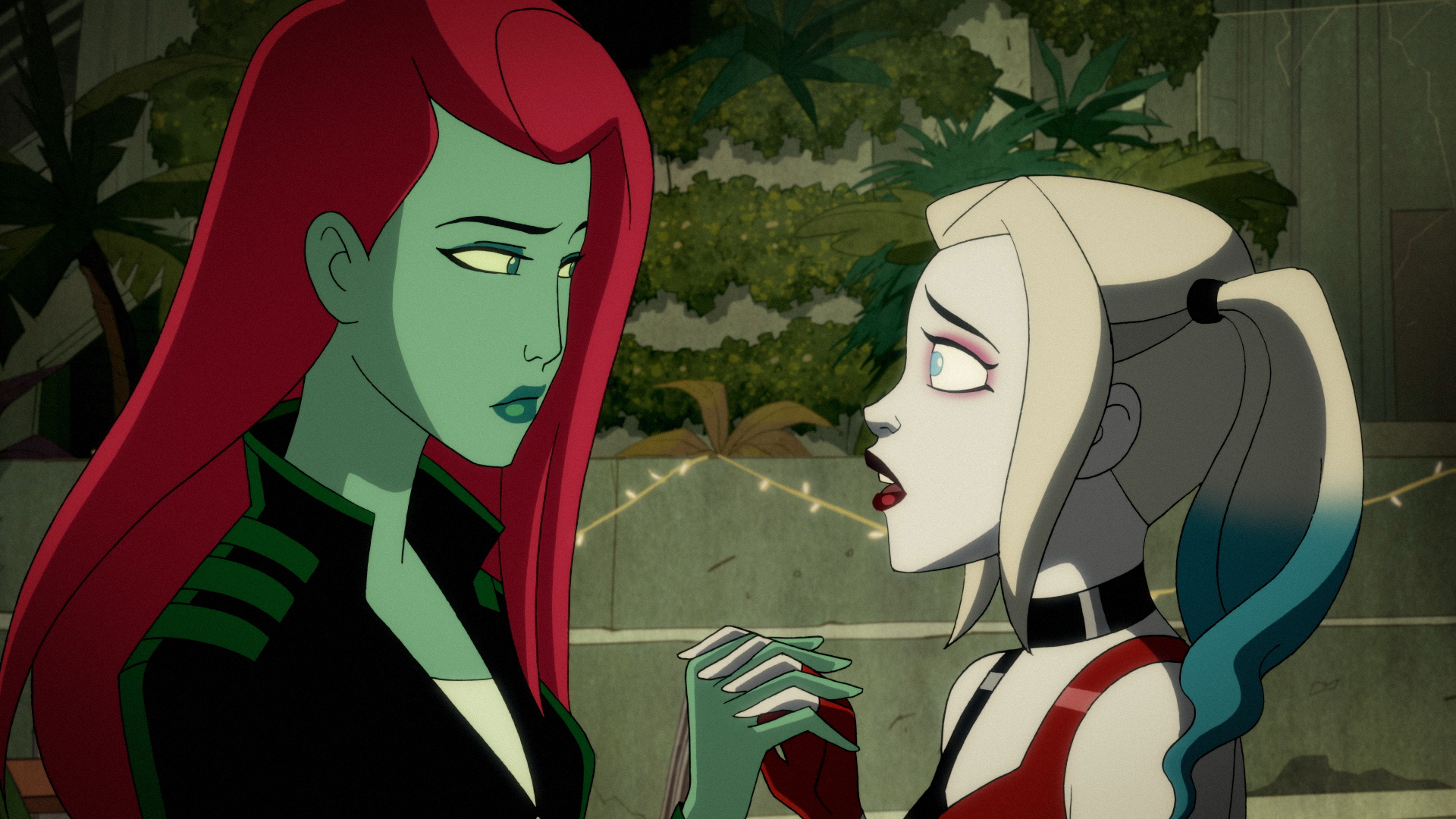 Poison Ivy has been a dastardly staple villain in DC Comics since the 1960s. And when Harley Quinn was introduced in the ‘90s, primarily in the show Batman: The Animated Series, the two started their decades’ long partnership.

Poison Ivy hates humans; she only saw her mission as saving Mother Earth and despised the human race for what they’ve done to her. But Harley Quinn is the only human that has ever wormed her way into Ivy’s heart. They were shown as best friends. Yes, they took showers together and lounged around in their underwear, but it wasn’t until later that it was further insinuated that they were more than friends.

More recently, the two were confirmed in 2015 as girlfriends “without the jealousy of monogamy.” And then they married in the Injustice comics in 2017. Also, 2017’s Batman and Harley Quinn had one of the cutest moments between the two, where only Harley could stop Ivy from destroying the human race.

However, the two really haven’t gotten the best writing in the comics regarding their relationship

Alone, the two are incredible characters. And together they form one of the best pairings, whether they’re girlfriends or not. But it’s the fact that DC Comics has continued to skirt around actually making them a couple that has fans annoyed. The whole “without the jealousy of monogamy” thing is fine since they’re both characters who choose to be in a polyamorous relationship. However, only Harley is really ever seen with other people. Ivy has had other romantic relationships, including Batman, however not really when she’s with Harley.

The bigger issue, though, for fans is that DC has “straight-washed” the couple at points. They don’t really give them storylines where their romance is non-negotiable. Of course, there are a lot of great issues and comics that do show them as such, like in Injustice 2.

Yes, both Harley Quinn and Poison Ivy are bisexual, but it doesn’t sit right with fans that they are hardly given the chance together

In one of the recent runs of Harley’s character, Harley and Ivy are forced to break up because of Poison Ivy’s split being, thanks to Lex Luthor. However, Harley then begins a relationship with Booster Gold and many are very upset with that.

Again, both women are canonically bisexual, so being with men or other genders is fine. But many fans have seen this done at the expense of the relationship between Harley Quinn and Poison Ivy.

Personally I hate it. It’s completely stupid that it’s supposed to be a follow up to Heroes in Crisis which was about Harley & Ivy’s love and Harley trying to kill Booster. Nothing about that book implied any sort of relationship between Harley and Booster. There’s no way that anybody with any sort of reading comprehension skills could read a panel with Harley trying to stab Booster while calling Ivy “her love” and think that the natural progression is Harley x Booster.

Especially with the Booster Gold storyline, it didn’t make some fans happy. Others do love it, though. But it continued the tradition of throwing Harlivy to the wayside, which many fans didn’t appreciate (again).

So that’s where Harley Quinn, the adult series on DC Universe, comes in. They start off as best friends first, and help each other get through some really personal issues. Harley has to truly delete the Joker from her life and her psyche, and Ivy learned to not hate humans as much.

But Harley is, well, Harley Quinn. She’s very unstable and oftentimes unreliable. And after turning back to the Joker once, Ivy understandably loses a lot of trust in Harls. Add that to all the neglect and trauma Ivy has gone through in the past, and it only makes sense that she can’t accept Harley’s declaration of love in Season 2.

The ending our fans deserve. What was your favorite #DCUHARLEYQUINN moment?

They come out on the other side, though, and in the finale are finally together, as longtime Harlivy fans have wanted for years. Not only did the show give a really mature look at two women who needed to fix themselves before committing to each other, but it also solidified their relationship.

And the creators have already said that if they get a Season 3, Harley and Ivy are here to stay as a couple.

“The first thing we both said [about Season 3] is, ‘We don’t want to do a third season where it feels like the stakes are [whether] Harley and Ivy stay together,’” co-showrunner Justin Halpern told SyFy Wire. “It’s much more interesting to do a show about how you navigate these very different personalities being in a relationship.”

Hopefully, fans get that Season 3, so Harley Quinn and Poison Ivy’s relationship can flourish in a way it hasn’t really done before.