This Morning’s Dr Philippa Kaye has claimed that having side effects from the Covid-19 vaccine is a good thing.

Speaking to Ruth Langsford and Eamonn Holmes on Tuesday’s instalment, the GP discussed the possible side effects of the jab.

It comes after host Ruth explained to the doctor that she was suffering from an ‘achy arm’ after having the vaccine last week.

‘A lot of people here talking about the vaccine and side effects,’ Ruth began.

‘Obviously, people watching the show yesterday and my social media. I was very lucky Philippa to get my vaccine at the weekend, I feel very blessed to have done that.

‘All I’ve got is a slightly achy arm, I have no other side effects but, people are talking about headache, fatigue, nausea, dizzy spells, aching joints. But, apparently, these can be a good thing, is that right?’ 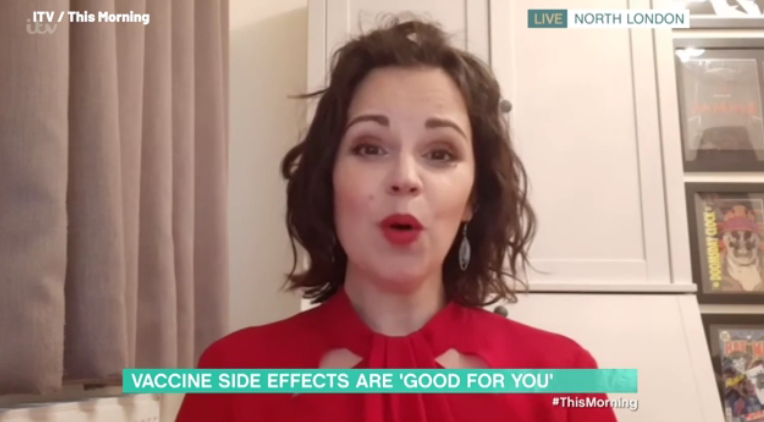 ‘These are a good thing,’ the GP explained. ‘These are a way of your body showing you that its immune system is working.

‘More than one in 10 of us will have the sore arm, aches and pains, potentially a fever, feeling unwell and those are signs that your immune system is getting to work.’

‘If you don’t have them it doesn’t mean that it isn’t working,’ she added. ‘But if you do, it’s a sign that it is.

‘Ride it out, it’s going to be a couple of days. Some paracetamol, plenty to drink and some rest and you’ll be on your way.’

Last week it was reported that people over 65 are now being offered the chance to get their vaccinations.

People aged 65 to 69 will be invited to get the jab in England if supplies allow and if GPs have done all they can to reach those at higher risk, the NHS said.

Next in line are over 60s, followed by those over 55. Finally, all those over the age of 50 will complete Phase One.

A definitive timeline for those not included in Phase One is yet to shared with the public.

It is expected that teachers and police officers will be next-in-line after over 50s – especially since Boris Johnson is reportedly keen to reopen schools on March 8.