There’s a scene in Lee Isaac Chung’s melancholy but also delicately witty “Minari” where Korean grandmother Soonja (played by veteran actress Youn Yuh-jung) wants to try her grandson David’s (Alan S. Kim) Mountain Dew, the sugary, strange-colored soft drink he’s always guzzling. David doesn’t much care for his grandmother, who’s been sent from Korea to their poky Kansas trailer to babysit while his parents work at a factory, so what he hands her instead is a glass of his own urine. Appalling, right? It’s actually a hilarious, even heartwarming scene, as an unfazed Soonja laughs it off, and even admits, hey, that wasn’t so bad.

That sort of unflappable spirit is evident in Youn herself, even from Seoul, nearly 7,000 miles away from New York during a phone interview with IndieWire. Youn has more than 40 credits to her name stretching back to 1971 with Kim Ki-young’s psychosexual thriller “Woman of Fire.” But, she insists, when she shows up to a set like “Minari” in the sweltering Ozarks of Oklahoma, she tries not to overthink any performance.

“I didn’t think about playing this role differently [than any other],” Youn said of her award-winning turn in “Minari,” which is also gaining her first-ever Oscar buzz. “I just did it, communicating with [the cast] and reacting with them. Whatever they do, I just react.”

Her show-up, find-your-mark, and read-your-line approach even earned her the imprimatur of filmmaker Lana Wachowski during Youn’s first brush with Hollywood on the Netflix series “Sense8” as “One-Take Wonder.” Youn earned that nickname, she said, “because I never needed more than one take.”

On the set of “Minari,” where she said she was “all on her own” and “independent” in terms of direction, everyone called her “Old Foxy Lady.” At 73, Youn insists she is “an old-time actress.” So when a scene calls for Soonja to be uncomfortably close to lapping flames, and the director doesn’t say ‘cut,’ she’s not going to stop until somebody gives the word.

“Don’t remind me!” she said when asked about this harrowing scene where Soonja, visibly slipping to dementia after a stroke leaves her half-paralyzed, accidentally causes a major fire on her daughter Monica (Yeri Han) and son-in-law Jacob’s (Steven Yeun) property.

“You’re supposed to know how the wind blows, this side or that side. They didn’t know at the time. The wind was blowing toward my face, and the flame — I almost barbecued myself,” Youn said of the open flames that were suddenly her scene partner. “[Lee] Isaac [Chung] was so intense about watching the monitor, and he didn’t say ‘cut.’ Unless a director says ‘cut,’ I’ll just go on. That’s my principle. So I was going on on that flame. I almost burned myself. Barbecued. Korean-barbecued!” 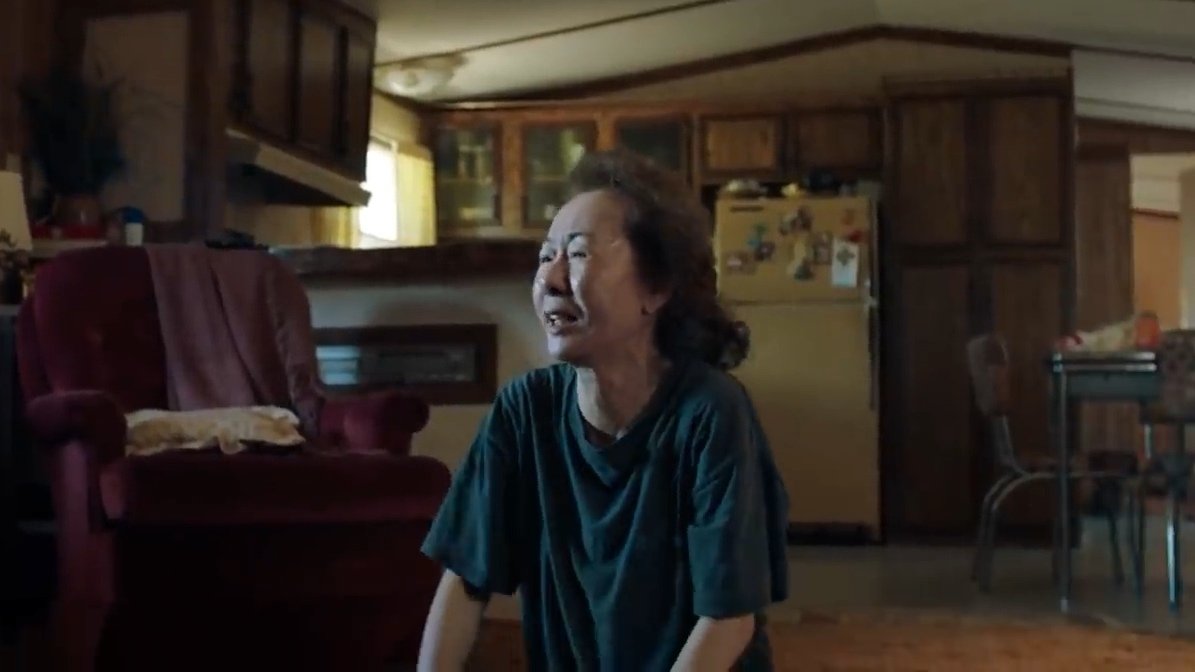 She said during this scene, Chung was “so worried about all the technicians, and how to make the flames” he nearly forgot the camera was still rolling on Youn. “But actually, I didn’t get burned. They called me Old Foxy Lady in front of all the flames.”

Long before shooting in Oklahoma for the first time for “Minari,” Youn received the film’s script via a friend, knowing that she was more or less Lee Isaac Chung’s first and only option. “With a small budget, he didn’t have much choice,” she said. Her friend warned Youn she probably wouldn’t make any money. “I said, ‘Never bring the money to me. I’ll do it.’”

The role of Soonja is based upon memories of Chung’s own grandmother, and the film is dedicated to her. “At a young age, he couldn’t understand his grandmother. Now, later on, when he grew up, he realized the true love from his grandma,” Youn said. “I asked him first, ‘Should I imitate your grandmother?’ Because, of course, he remembered exactly what she did. He said, ‘You don’t have to do that. You just play the role. Whatever you feel like doing.’”

But Youn did have some firsthand knowledge of living with a sly, sacrificing, and offbeat grandmother who holds the family together in the background — namely her own great grandmother, who passed when she was 10. “I didn’t like her very much at all. I feel so guilty nowadays,” she said. “I didn’t understand her. After the war, it [was] not very hygienic in Korea. I thought grandma was dirty or something. That’s why I didn’t like her. Because I was born in 1947, after the Korean war, we were all poor. Sometimes, we skipped lunch in order to save food. She’d say she always wasn’t hungry. Now, I realize, I am sure she was hungry, but she sacrificed herself for us. She tried to get more food for us. I didn’t know at the time. My heart breaks.”

Youn’s character also has to undergo physiological changes after her stroke, but beyond consulting with a neurologist in Korea, Youn trusted her intuition over method levels of prep work. The biggest challenge of the shoot, she said, was filming in the hot heat, without air-conditioning, and a tiny, indie crew inside a trailer.

“I’d never been to Oklahoma. It was hot. Humid. Set was just a trailer. Half the days were spent wrestling, sweating in there with the crew. The first day, the AC was broken. You can imagine me being there with all the crew,” she said, laughing at herself.

Youn has plenty of experience living in the U.S., as she settled for a time in St. Petersburg, Florida from 1975 to 1984. But that wasn’t because Hollywood called, but rather, like the family in “Minari” pursuing the so-called American Dream, it was an attempt to build a life outside Korea. She was “washing dishes, washing clothes. Just being a nice housewife.”

She’s been back in South Korea ever since, starring in films like 2010’s “The Housemaid,” itself a remake of a Kim Ki-young film from 1960, and 2012 Cannes entry “The Taste of Money.” She recognizes the emboldened interest in Korean projects in the U.S. now, especially after the explosion of “Parasite” last year.

As for all the awards attention Youn is getting this year, such as winning Best Supporting Actress from the LA Film Critics Association, she said it’s “very strange” but that “I try to ignore it. Getting an award is happy, but my award is if I have a next project. That’s my award.”