If any other filmmaker achieved eight Oscar nominations for Best Director across six dates, it might sound like a fluke. For Steven Spielberg, it’s destiny.

No director in history has been so closely associated with juggling the commercial and artistic potential of the medium. Even as he remains an underdog this year with his “West Side Story” nomination (which is Jane Campion’s to lose for “The Power of the Dog”), Spielberg’s latest opportunity speaks to his unique capacity to make movies that his Academy brethren embrace as embodying filmmaking at its finest. He’s a crowdpleaser with big ideas whose entire oeuvre chases the mainstream concept of “movie magic” as a mission statement.

However, a closer look at the spectrum of Best Director nominations he has received over the years tells a deeper story, and tracks the efforts of a filmmaker whose desire to make audience-friendly movies merged with a desire to make Oscar-friendly ones. That pattern has led him to constantly shift gears. For the better part of his career, Spielberg has oscillated from escapism to gravitas, and tends to be rewarded only for the latter. “West Side Story” finds the happy medium he’s been chasing since the ‘70s.

Any appraisal of Spielberg’s Oscar history must start with his first snub. That came in 1975, when Spielberg was basking in the glow of the box office behemoth known as “Jaws.” Watching the nominations on television, the 27-year-old auteur melts into disappointment when he realizes he didn’t make the cut, and takes a stab at awards prognostication by concluding that he lost his slot to Federico Fellini for “Amarcord.” But the most telling observation from this moment, which probably makes the less self-congratulatory older Spielberg cringe to this day, comes when he musters a larger theory for his absence. “This is called commercial backlash,” he concludes. “When a film makes a lot of money, people resent it.”

There’s a certain irony to revisiting that sentiment in 2022, as the Oscars struggle to find new ways of injecting populism into an increasingly insular show. Yet Spielberg proved his theory through his own work long before that. Two years later, “Close Encounters of the Third Kind” brought an operatic sense of awe to the alien invasion trope, balancing artful storytelling with genre-based escapism so well the Academy couldn’t deny its qualifications. By the time “Raiders of the Lost Ark” came along, the Spielberg brand was unassailable, and even a Saturday matinee throwback couldn’t be denied its recognition as a thrilling cinematic achievement. “E.T. the Extra-Terrestrial” arrived one year later, further solidifying Spielberg’s unique form of poignant showmanship.

However, it was 1985’s “The Color Purple” that signaled the arrival of “Serious Spielberg,” introducing the potential for his craft mastery to be directed toward more familiar dramatic material. His nomination there, and the ensuing respect for “Empire of the Sun” (which was not nominated), helped establish the broader foundation of Spielberg appreciation that enabled his first win for “Schindler’s List” in 1993 (beating out Jane Campion for “The Piano,” though history is unlikely to repeat itself this year).

At the end of the evening, an emotional Spielberg told the room that his win amounted to “the best drink of water in the longest drought of my life.” He stayed thirsty through the end of the decade, when he picked up his second statue for directing “Saving Private Ryan,” yet another complex historical work seen through the lens of his meticulous and engrossing style. That time, grasping the Oscar from the podium, he confessed: “Am I allowed to say that I really wanted this?”

Spielberg’s career has been built around the art of audience satisfaction, whether that means giving the people the escapism they want or surprising them with the history lesson they need. Outside of “A.I.: Artificial Intelligence,” a movie that was essentially co-directed by Stanley Kubrick, Spielberg’s most daring endeavors haven’t come at the risk of alienating any portion of a general audience.

At the same time, he’s been rewarded for work that doesn’t tout its own commercial potential. In the years since his first Oscar win, only “Serious Spielberg” has landed a Best Director nomination: After “Saving Private Ryan,” he returned to the category with “Munich” and “Lincoln.” And while his crowdpleasing instincts remained intact for everything from “Jurassic Park” to “Minority Report” and “Ready Player One,” these movies were seen more in the vein of popcorn indulgences (though in some cases, in terms of scale and sophistication, they were superior to those other titles). 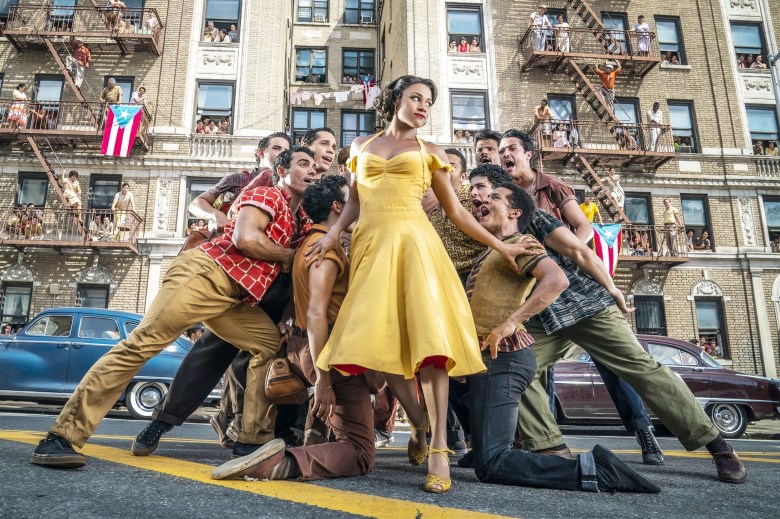 In light of that history, “West Side Story” stands out. Spielberg’s energizing adaptation of the classic Broadway show outshines the 1961 version with a propulsive pace and balletic camera movement that often feels like an extension of Leonard Bernstein’s jazzy rhythms. At the same time, it’s a thoughtful exploration of modern-day gentrification and race relations, a liberal indictment of wealth disparity and the roots of street violence in a fractured society. All of that comes through courtesy of the ultimate Trojan horse. Spielberg and screenwriter Tony Kushner excel at utilizing the boundaries of the Hollywood musical, one of the most treasured examples of escapist storytelling, to get deep.

Of course, audiences in 2021 didn’t exactly see that as an enticing offer, and “West Side Story” struggled at the pandemic box office at a time when older audiences were staying home. Its 2022 nomination certainly exists a world apart from the “commercial backlash” Spielberg moaned about nearly 50 years ago. However, Spielberg’s decision to make the movie at this juncture in his career speaks to a long-standing calculation at the root of his career progression.

It’s hard to imagine a Spielberg remake of “West Side Story” gaining traction 20 or 30 years ago. At this precise moment, the drama of the narrative has renewed thematic resonance that allows it to pierce the cultural conversation in new ways, even as it delivers a riveting sense of what makes musical showpieces tick. Every sweeping camera movement works on its own magnetic terms while the narrative speaks to deeper themes. It’s Serious Spielberg with a sense of fun, the movie he’s been waiting his whole life to make, and at this juncture it’s exciting just to ponder what might get him nominated next.