Jeremy Vine is recovering after falling off his penny-farthing.

Yes, you read that correctly – Jeremy Vine avoids public transport by ‘cycling’ around the city on one like an actual Victorian.

A penny-farthing was a bicycle popular in the 1870s and 1880s with a large front wheel which the saddle sits on top of, with the rider subsequently eight foot in the air.

However, his eccentric mode of transport has come back to bite him as the presenter of The Jeremy Vine Show was thrown off his penny-farthing and landed on his head, giving the star a black eye.

Jeremy was already eight foot off the ground when he came flying off his bicycle, and explained he was on grass with no one around when disaster struck.

‘I didn’t see the divot, my front wheel went into it and I went over the handlebars and landed on my head,’ he told viewers of the Jeremy Vine Show today, sending in a video message. 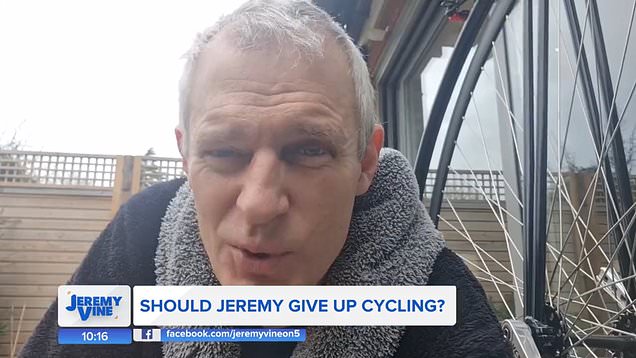 The Jeremy Vine Show even recreated the scene using some pretty dodgy animatronics to give viewers the full gravitas of the ordeal.

Jeremy ended up ‘pretty incoherent’ after being knocked out for a second or two.

However, doctors at A&E warned Jeremy he could have ended up seriously injured and claimed they’d never actually written on a form for any patent before: ‘Was riding a penny farthing.’

In an actual segment on today’s programme, viewers were asked if Jeremy should give up the penny-farthing after his family banned him from using the death trap unsupervised.

Of course, safety comes first but self-respect isn’t far behind so Jeremy, we say bin the bike. Or donate to a good cause.

Viewers were divided over Jeremy’s future with the penny-farthing with some hoping the incident ‘doesn’t put him off’ while others were less sympathetic.

‘I’m sorry but if you can’t put your feet on the ground your bike isn’t safe or roadworthy!’ cried one particularly appalled audience member.

The Jeremy Vine Show airs weekdays at 9.20am on Channel 5.