The protagonist of “Jessica Jones” may have enhanced strength and a limited ability to fly, but superpowers have never been the most compelling part of the celebrated Netflix series. The show, which follows former superhero Jessica Jones’ (Krysten Ritter) efforts to run a detective agency and deal with her past demons, received critical acclaim in its first season for fearlessly addressing heavy topics in a genre that’s become decidedly family-friendly in recent years.

While comics, including “Jessica Jones,” often embrace mature themes, most comic-based films and television shows in the last decade have stayed firmly within PG-13 territory. “Jessica Jones,” like Marvel’s other Netflix shows, bucked that trend several years before R-rated superhero flicks such as “Deadpool” and “Logan” hit theaters.

Though “Jessica Jones,” showrunner Melissa Rosenberg always intended for the series, which premieres its third and final season on Netflix Friday, June 14, to be dark entertainment, she was touched that the the show’s handling of adult problems was so well-received by viewers.

“By nature of a show revolving around a kickass woman I obviously knew it would have a feminist bent, but when we released Season 1 my primary hope was that people would find it entertaining,” Rosenberg told IndieWire. “What surprised me is how much it resonated with the audience and survivors of rape, domestic violence, and PTSD. It wasn’t our intention going in, but coming out of the show, it was one of the most gratifying things of my career.”

“Jessica Jones” does not shy away from mature themes, but the show never lacked for gruesome physicality, either. Necks are snapped, bullets splatter brains, and, in one particularly harrowing scene in Season 1, a man impales his own head with a pair of shears. Characters die in this show, and they die hard.

Given the show’s frequently dark content, Rosenberg, who also served as head writer for “Dexter” and the “Twilight” films,  said she anticipated some pushback from Marvel or Netflix executives but was relieved to receive nothing but support. That said, there were some lessons to learn when the series leaned into more superpowered action scenes. These shows may be part of the Marvel Cinematic Universe, but that doesn’t mean they shared the seemingly limitless budget of films like “Avengers: Endgame.”

Jessica Jones & Co. are street-level superheroes and Rosenberg said her team quickly learned that the action scenes and CGI would need to reflect that if they wanted to keep the show believable.

“We discovered early on that when Jessica would jump up to a roof, if you saw the effect, it was less effective than seeing her pop out of frame and then seeing her land,” Rosenberg said. “We don’t have the budget of the MCU films. You have to do this on a TV budget and make it look more grounded, so the less you see is often the better.” 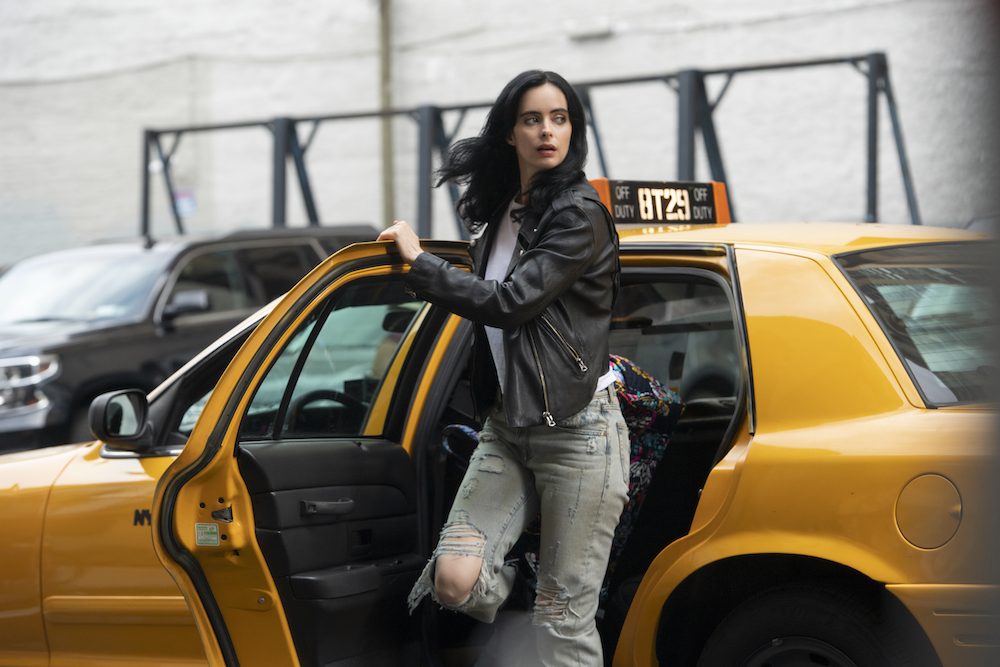 That said, Rosenberg noted that working with Disney and Netflix was anything but hands-off. The companies served as invaluable sources of feedback for Rosenberg and her team, who couldn’t rely on the research and adjustments that typically go into cable TV shows.

Beyond that, Rosenberg added that streaming platforms such as Netflix offered several unique advantages for screenwriters who may be used to working on cable programs. Netflix’s lack of commercials means writers don’t have to worry about cutting up content in specific ways, and viewers’ propensity for binge-watching meant that Rosenberg could approach each season of “Jessica Jones” as a 13-hour movie.

Of course, for longtime fans of Marvel’s Netflix properties, “Jessica Jones” Season 3 will be nothing if not bittersweet. Netflix cancelled the series, along with “The Punisher,” in February. Those cancellations were preceded by the axing of Marvel’s other Netflix superhero shows, including “Daredevil” and “Luke Cage,” in 2018. Disney won’t be able to begin developing new content featuring any of those characters until 2020 due to contractual reasons, which means that “Jessica Jones” Season 3 is almost certainly the last time fans will be seeing the hard drinking P.I. for the foreseeable future.

Although Rosenberg said her team was not pressured to make Season 3 serve as the conclusion to the entire Marvel-Netflix world of superheroes, she noted that they re-crafted some of the season’s arcs to bring the characters to a place with closure.

Would Rosenberg be interested in revisiting the character in the years ahead? Maybe — after all, nothing stays dead forever in comic book world — but she emphasized that she was satisfied with how Season 3 concludes the show’s character arcs and was primarily focused on working on new projects.

“In terms of continuing ‘Jessica Jones,’ if Krysten wanted to come back we could talk about it, but I’m moving on,” Rosenberg said. “Three seasons was a complete story and Krysten and I feel satisfied.”

Even if “Jessica Jones” had survived, Rosenberg wouldn’t be running things for future seasons. The Peabody Award-winner signed an eight-figure deal to create and develop new projects for Warner Bros. TV last August and had already planned to exit her Netflix and Marvel duties after finishing Season 3 of “Jessica Jones.”

While Rosenberg declined to discuss details about her upcoming plans at Warner Bros. TV, she said she was eager to venture into a new work environment and pursue different projects.

“It’s an all-new world for me with new creative partners,” Rosenberg said. “I was ready to move on because I had been with Marvel and Netflix for five or six years and it was time to shake it up a little bit and put myself into unfamiliar territories.”