It featured the Keeping Up with the Kardashians star in a revealing outfit posing with her daughter, True, and NBA player Tristan Thompson, who matched Khloe’s costume theme.

The costumes featured a famous couple, and despite some people feeling Khloe was keeping a pregnancy secret, she denied those rumors.

The theme of Khloe Kardashian’s costume was Cleopatra, as she donned a shiny gold outfit by Bryan Hearns. The revealing costume also included a glittery headpiece and gold metallic bra top created by Laurel DeWitt.

Tristan stood nearby, dressed up as Marc Antony with a golden ensemble, including a helmet and a flowing red cape.

Their 2-year-old daughter True was also part of the photo. According to People, True wore a custom-created pleated gold gown, also by Hearns.

The Halloween costumes have brought plenty of attention their way, as Khloe’s Instagram photo series has racked up over 3.2 million likes and plenty of comments. 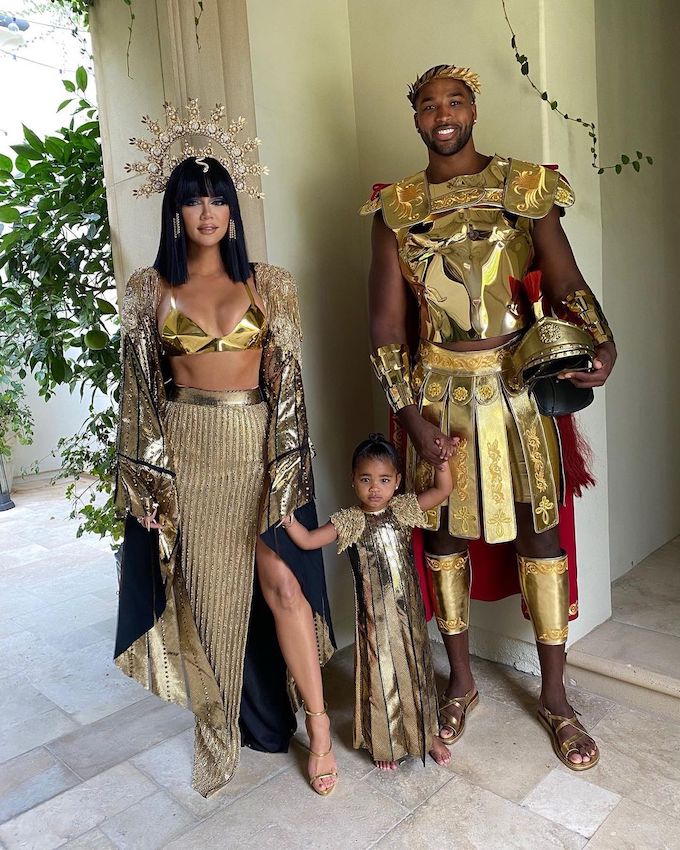 Among the commenters on Khloe’s matching Halloween costumes post was her sister Kourtney who simply wrote, “Holy.”

Jonathan “Foodgod” Cheban, who recently was part of a group costume with Kim Kardashian and her kids, commented, “My bro.. Tristan.”

Bravo’s Andy Cohen commented with a smart hashtag, referring to the Kardashian as “#Khloepatra.” That prompted Khloe to reply to him with, “there’s my guy!!!!!!”

Plenty of other individuals commented to praise the amazing looking outfits. However, the comments were not without people bringing up the fact Tristan Thompson was in the photo, along with the ongoing pregnancy rumors.

“Tristan’s triumphant return to the Instagram feed! 😆 guess he’s legit back in action,” one person commented on the IG post, making the relationship more official.

“Girl, he didn’t even post a pic with you! Only of himself!! He loves himself ONLY! But you praising him again and again…,” another person commented with regards to Tristan.

Meanwhile, on Twitter, someone tweeted they were “still convinced @khloekardashian” was going to reveal she’s pregnant in a couple of months. That brought Khloe herself to reply, “Well my abs say otherwise babe.”

Khloe and Tristan have one daughter, True, together, who was born back in April 2018. However, rumors arrived that Tristan cheated on Khloe during her pregnancy.

The couple split up in 2019 after it was rumored that Tristan had cheated on Khloe with Jordyn Woods, who was Kylie Jenner’s friend at the time. Jordyn eventually opened up as the cheating scandal was confirmed.

Based on the fact Tristan seems to be back in the picture with Khloe, literally and figuratively, many commenters on Khloe’s IG post think maybe Kylie and Jordyn can be friends again too. Time will tell with that.

According to a report, Khloe and Tristan got back together as of this past August. It was also reported via an inside source that the couple “can’t wait to have another baby.” So it may only be a matter of time before True has a brother or sister.

Tristan, who has been part of the NBA’s Cleveland Cavaliers roster since 2011, has one other child, son Prince Tristan Thompson, who was born to his ex-girlfriend Jordan Craig in 2016.

He may have his third child coming at some point in the future. As of now, Khloe appears to have squashed those recent pregnancy rumors, though.

Keeping Up with the Kardashians airs Thursdays at 8/7c on E!