Inspired by the Elizabeth Holmes trial, this week’s episode of NBC’s Law & Order centered on Nina Ellis (Under the Dome‘s Rachelle Lefevre), the CEO of a health tech company whose fiancé was murdered.

The episode began with Bernard and Cosgrove questioning Nina about Kyle’s death, and Nina assuring both detectives that their relationship was solid.

After interviewing several others tied to the company, the cops circled in on Derek, a former employee who had alleged that the company’s medical tests were fraudulent. According to Nina, Derek was fired two months before the company was poised to go public and he thus lost out on millions — a good motive for murder. Plus, a witness called in a tip about someone disposing a gun in the sewer, which local police found two blocks from where Derek lived.

During his interrogation, Derek revealed that he wasn’t fired. He quit when he realized the cancer screenings were only 50-percent accurate. He then had alerted Kyle, who agreed to pause the IPO and look into the faulty test results. Unfortunately, Kyle died before he got the chance to do so. Derek also alleged that the tests received FDA approval because Nina fabricated the results, inviting the detectives to look at her as a suspect.

Police searched Nina’s apartment and found the coat she was wearing on the day of Kyle’s murder, which had traces of blood on it. That, combined with the phone tip about the gun and the potential delayed IPO, made a good motive for Nina. Cosgrove and Bernard arrested the CEO just as she was headed out of town. 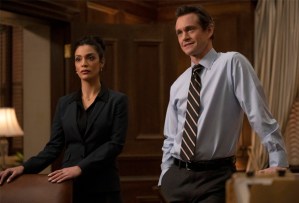 After making bail, Nina played the part of the wrongfully accused to reporters and even called herself an “unapologetically ambitious female entrepreneur who refuses to conform to archaic gender stereotypes and societal pressures.” She’s good which meant this case wouldn’t be easy.

Price tried to get the judge to approve witnesses who would testify about the faulty tests, but Nina’s lawyer countered that they were irrelevant to the case. After the judge sided with Nina, Price decided to focus on picking jurors who’d jump at the chance to take a rich white woman to task.

While Price’s testimony painted Nina as cold-blooded killer, he knew they faced a huge hurdle in proving that she killed Kyle. That was, until Nina changed her story and claimed she killed Kyle because he abused her throughout their relationship. With no records of the alleged abuse, McCoy urged Price to pick apart her story on the stand.

Nina delivered a compelling testimony, even crying on the stand while detailing an alleged assault. Concerned but not panicked, Price assured Maroun that they would make up ground on the cross examination. However, Maroun was hesitant to call Nina’s abuse allegations lies. This sparked a debate between both lawyers, with Nathan pointing out that there are no records of this abuse and Maroun countering that not everyone reports their abuse. The #MeToo movement changed the way we think about abuse and scrutinizing her claims is not helpful to that. Price agreed, but pointed out that their job wasn’t to “cater to movements” but to follow the law.

After floating a plea deal by Kyle’s father, who hated the idea, Price sought counsel from McCoy on the situation. McCoy noted that Kyle’s father’s judgement was clouded and therefore, his wishes didn’t matter. But Price believes in the system and insisted that jurors will see Nina for what she is when he’s through.

In a cross examination with Nina, Price pressed her about customer complaints about faulty tests. Pressing her even further, he asked why she never told anyone about Kyle’s abuse, and that didn’t sit well with Maroun. During a break, Maroun called him out for essentially calling Nina a liar on the stand. Switching gears, Price decided to look into her accusation that Kyle broke her arm three months ago.

This led to Nina’s horse-riding instructor taking the stand to reveal that Nina broke her arm after falling off of her horse. That was enough to convince the jury that Nina was, in fact, lying about the abuse, and they delivered a guilty verdict for Kyle’s murder.

What did you think of the Law & Order revival’s second outing? Will you keep watching?