Starting Thursday’s episode of her self-titled chat show, Lorraine welcomed Uri Geller onto her show to find out what he thought the result of the England and Scotland match would be. The illusionist explained he would use his super powers to help the Scottish team be victorious but his methods left the host a little baffled.

“Yes, the Scottish fans obviously, who knows what I’ll be getting from England when Scotland beats England tomorrow,” Uri began.

“But I’m going to unleash my powers, you all know what I’ve done in the past. Stopped the Big Ben and all that.

“So Scottish fans if you can hear me, you link up with me and feel my energy and let’s pray that you will win tomorrow.”

As the interview came to a close, Lorraine remarked: “Thank you, thank you very much indeed. 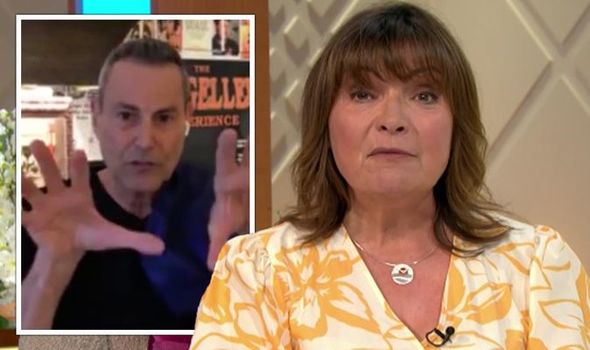 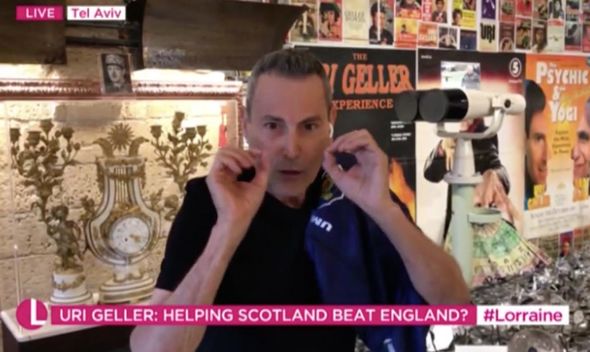 “Great to talk to you Uri from Jaffa. Who knows we can take all the help we can get.

“That was different wasn’t it?”

Going on to mock England fans, Lorraine laughed: “Please tell me this can’t be true but Uri says, I can’t believe I’m saying this, but English fans are going to wear little aluminium pointy hats to stop him and the power of his mind. 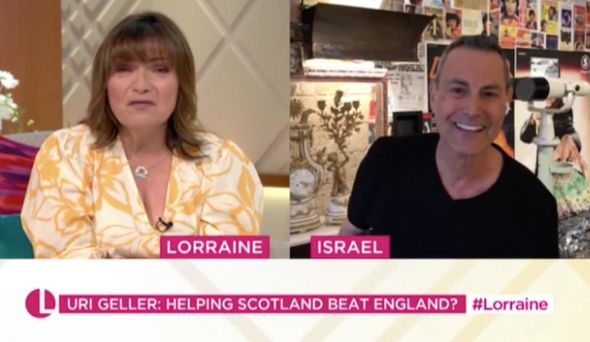 One posted: “On the tele today we have Uri Geller supporting Scotland over England broadcasting live from Tel Aviv…. My mind just cannot compute this so early. #LORRAINE #itv #EURO2020.”

Another added: “Uri’s on Lorraine trying to manifest a goal for Scotland tomorrow with a spoon. We’re sorted. #LORRAINE.”

“#Lorraine Now England are f**ked now Uri Geller is on Scotland’s side,” a third tweeted.

Someone else shared: “I hope the English FA and police are going to investigate Uri Gellar for match fixing #LORRAINE.”

Uri’s appearance on Lorraine came after he insisted he would us “psychic powers” to make England lose.

He explained: “This is going to be only on this match because of what I did to them in Euro 96.

“I still get these hate letters from Scotland. I have a gut feeling that intuitively I feel that I should help them out this time.

“It’s everything, guilt and [the fact that] interfering with football tangibly is a no-no.

“England won and it’s now about survival for Scotland because they lost to the Czechs so if they don’t win they’re probably out.”

He added to Daily Star: “I’ll do everything in my ability, my capacity to help them win.”

Lorraine airs weekdays on ITV at 9am.