Naga Munchetty and Charlie Stayt usually conclude the week on BBC Breakfast. But today, viewers tuned into see two other BBC reporters present the morning show. Chris Mason and Sima Kotecha were sitting in for the duo and delivered the latest news from across the globe.

Chris kicked the show off at 6am with: “Good morning! And welcome to Breakfast with Sima Kotecha and Chris Mason.”

“Good morning!” Sima took over. “Our headlines today… a call for social media companies to do more to stop the spread of anti-vaccine content.” 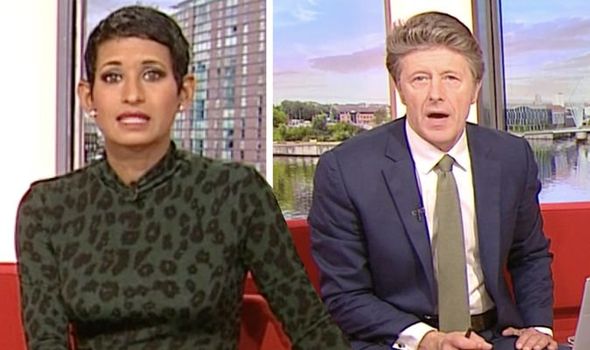 Instead of Sally Nugent or Mike Bushell, John Watson was sitting in for sport.

He said: “Good morning, in sport, can anyone catch the world number one Dustin Johnson, who carries the four-shot lead into the final day of Golf Masters at Augusta?”

And rounding off this morning’s team was Sarah Keith-Lucas who replaced Carol Kirkwood and Matt Taylor for the weather report.

She summarised: “Good morning, we’ve got some heavy downpours and some strong winds too – especially in the south.

“Strong winds combined with a high tide mean there could be some coastal flooding particular across some southern and western parts of England and Wales too.

“I’ll bring you all the details throughout this morning’s programme,” the meteorologist concluded.

One said: “@sima_kotecha Lovely to see you on breakfast this morning x.”

“The ideal team for a Sunday #BBCBreakfast .. just the right balance. Including @blakeyblogs,” another wrote.

Someone else mentioned: “Can’t wait for BreakfaS(ima)t time #BBCBreakfast.”

“@ChrisMasonBBC @BBCBreakfast I’m tuning in from 8ish. Make it good. No pressure,” a fourth joked.