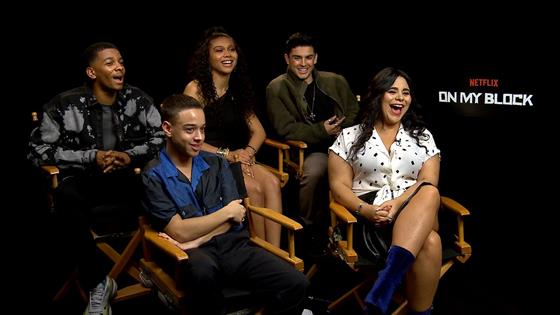 Season three of On My Block is here, and the bags are off!

Season two of the Netflix series ended with a little kidnapping cliffhanger, and the new highly anticipated season picks up with the reveal of who did it and why. From there, as the cast tells E!’s Will Marfuggi, it’s an adventure, and some things have changed.

“It’s like On My Block grows up and gets darker,” says Jason Genao. “It’s like, this is a little bit for my mom too. Like let’s get the adults involved.”

Diego Tinoco says the darker, more adult content is the stuff an actor dreams of “to help them grow as artists,” so he had a particularly good time diving into that part of the season.

It’s not all dark though. Brett Gray and Sierra Capri say that while there are dark elements, there’s some light in there too.

“We played so much this season, and I feel like were in so many different locations,” Capri says. “That to me is one of the funnest parts of the season.”

The cast also just had a good time being together, and opened up to Will about their many group text chains, including a taste of who will leave you on Read.

“I’m gonna start sending my phone bill to some of you,” Genao says.

“And then we will send it right back,” says Capri.

For the fans who haven’t yet binged the whole show, Gray’s advice is not to ever say that to an On My Block fan.

“I feel like the show speaks for itself. Like when you talk to an On My Block fan and you haven’t seen On My Block, they will make sure that you know it’s necessary to watch the show.”

“They fight to the death for us,” says Jessica Marie Garcia, after she mimes taking out her earrings. “We are so lucky, we don’t have to do anything.”

Hit play above to hear more from the cast!