In the meantime, the second season has been rebroadcasting in its place as of April 9, 2020. The third season was originally announced as streaming exclusively on Amazon Prime Video, but in July 2020 Crunchyroll confirmed that they would also be streaming OreGairu Season 3. But will the third season of the anime series be the final ending of the story? Apparently so since the third season’s official title is My Teen Romantic Comedy SNAFU: Fin (or “Kan”, which means “The End” in Japanese). That means there will not be an Oregairu Season 4 anime.

The first season was produced by Brain’s Base but then switched studios to Feel Studio for the second season. The character designs noticeably changed after the studio switch.

The exact release date for the My Teen Romantic Comedy SNAFU Season 3 #anime is finally confirmed! For more details: https://www.monstersandcritics.com/anime/oregairu-season-3-release-date-2020-my-teen-romantic-comedy-snafu-season-3-yahari-ore-no-seishun-love-comedy-wa-machigatteiru-light-novel-manga-ending-spoilers/

The OreGairu Season 3 opening (OP) theme song music “Budding Rain (Megumi no Ame)” will be performed by Nagi Yanagi and the song is featured in the above trailer. English-speaking fans of the anime will be excited to hear that Sentai Filmworks is releasing an Oregairu English dub for the first two seasons. They will also release a new Blu-Ray/DVD box set in 2019.

The English dub for My Teen Romantic Comedy SNAFU Season 3 was announced by Sentai Filmworks. The English dubbing began streaming on HIDIVE beginning on August 20, 2020.

This article provides everything that is known about My Teen Romantic Comedy SNAFU Season 3 (OreGairu Season 3) and all related news. As such, this article will be updated over time with news, rumors, and analysis. Meanwhile, let’s delve down into what is known for certain.

The My Teen Romantic Comedy SNAFU anime series is based on the Yahari Ore no Seishun Love Comedy wa Machigatteiru light novel series (My Youth Romantic Comedy Is Wrong, As I Expected) by author Wataru Watari and illustrator Ponkan8.

Started in 2011, the OreGairu book series was up to Volume 13 as of November 20, 2018. OreGairu Volume 14 was originally scheduled to release in November 2018, but it was delayed until March 2019, then again to April 18, 2019, and for a time the final book’s status was uncertain. The publisher would only say that the delay was due to “production reasons”.

Eventually, it was announced that My Youth Romantic Comedy Is Wrong, As I Expected Volume 14 will release in Japan on November 19, 2019. The announcement also revealed that the final volume will have the highest page count for all the books in the series.

Although the ending of OreGairu Season 3 will be based on Volume 14, the announcement did not specify whether the book’s delay had any effect on the anime adaptation. 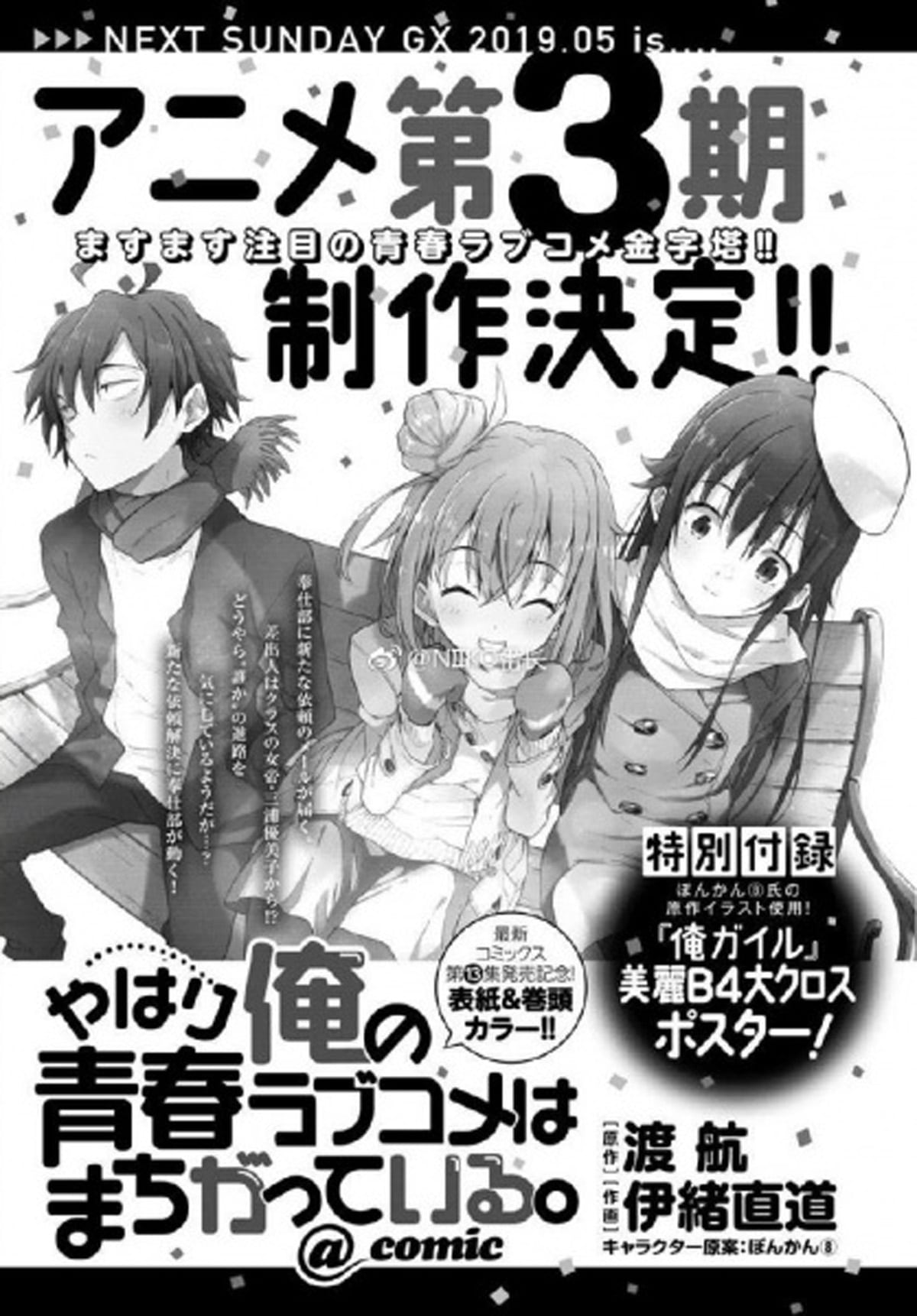 The first two manga series are up to 10 and 12 volumes, respectively, while the third manga series was a four-panel manga that finished back in 2015.

The official English translation for both the OreGairu manga and the light novel series is licensed by Yen Press. Unfortunately, the English light novels were only up to Volume 8 by October 29, 2019.

Season 1 covered the story events of Volumes 1 through 6 of the OreGairu light novel series, while anime Episode 13 covered Volume 6.5. Season 2 was a direct sequel and covered Volumes 7 through 11. OreGairu OVA 2, which released in 2017, covered Volume 10.5 and from a timeline perspective, it fits in-between episodes 10 and 11 of Season 2.

Back in the fall of 2018, it was announced in Dragon Magazine that My Youth Romantic Comedy Is Wrong, As I Expected Volume 14 will be the ending of the entire story. Therefore, based on the title of the third season saying “Fin” it is very likely that OreGairu Season 3 will adapt the entirety of the final story arc, which began with Volume 12.

For fans of the light novel series, this is probably good news indeed.

Anime adaptations of light novel series will often change the order of events or skip certain story events for lack of time. The final light novel is significantly bigger in page count, but since OreGairu Season 3 is adapting about half the usual books in a single season it’s possible the final anime season will follow the books more closely.

The My Teen Romantic Comedy SNAFU Season 3 release date was originally scheduled for April 9, 2020. However, due to the coronavirus pandemic, the anime premiere was “postponed” until July 9, 2020, the summer 2020 anime season.

The production will be a “trial and error” process that accounts for pandemic mitigation and the safety of the anime staff members.

While Crunchyroll is streaming the episodes, their announcement only stated that the “launch time” is “coming soon”. Crunchyroll will be streaming OreGairu Season 3 in the United States of America, Canada, Ireland, United Kingdom, Finland, Sweden, Norway, Denmark, Australia, New Zealand and the countries comprising Latin America .

The broadcast of My Teen Romantic Comedy SNAFU Climax had been postponed due to the influence of the new coronavirus, but we have decided to broadcast in July 2020.

When it comes to broadcasting in July, we are proceeding with the production by trial and error with safety first in mind.

The last time audiences watched the anime, the second season ended right after the Valentine’s Day event with Yukino having a request for Hachiman at the aquarium. But audiences were left hanging since she never told him what that request was in detail.

After the date, Hachiman and Yui go home with Yukino to meet up with her older sister, Haruno Yukinoshita. Yukino has decided to finally confront her mother with the support of her sister, but she’s still trying to gather her resolve.

In the last season, Hachiman’s little sister Komachi had taken the Sobu High School entrance exams. In OreGairu Season 3 we find out that she and Taishi Kawasaki are both accepted to Sobu.

Student Council President Iroha Isshiki decides to hold prom and she ends up asking the Service Club to help set up the event. However, the parents’ school board is against holding a prom and Yukino’s mother is out to stop the prom. Can Yukino stand up against her mother? The prom is merely a backdrop to the big questions the youth face in their lives. They may be content to stay where they are for the moment, but in order to move forward, they must put their feelings into action and find an ending to the present.

One part of their lives that must end is their current relationship status. But then Yukino puts an end to even the Volunteer Service Club itself!

How this story ends not even readers of the My Teen Romantic Comedy SNAFU books know yet. Unfortunately, anime-only fans will need to wait until the Oregairu Season 3 release date to watch the ending. Stay tuned!