One month after Paul shared a photo of himself reuniting with a pregnant Karine and their son Pierre, the couple marked three years of marriage. Fans know Karine and Paul’s relationship has been anything but easy, especially in the past few months.

Over the past few years, TLC viewers have watched Paul and Karine’s relationship play out on various 90 Day Fiance shows. Fans first met them on Season 1 of 90 Day Fiancé: Before the 90 Days. The couple returned for Season 2, which featured their wedding.

Most recently, Karine and Paul appeared on 90 Day Fiance: Happily Ever After? Season 5 but were absent from the Tell-All due to issues surrounding their third break up.

For now, though, they are back together and celebrating their anniversary.

On Tuesday, November 3, Paul took to Instagram to shares photos of his and Karine’s wedding. He acknowledged the couple, who is expecting their second child, a boy next year has been through a lot.

Happy 3 Year Wedding Anniversary. It’s been one hell of a roller coaster ride.

Paul’s post’s comments section was flooded with fans congratulating the couple on their anniversary and working on their marriage. However, some comments took aim at Paul for his caption, pointing out it was far from a romantic message to his wife.

Celebrating their special day with family

Not long after acknowledging their wedding day, Paul shared them celebrating their special day with son Pierre and Karine’s family.

The large group was all smiles as they posed for the camera. Paul kept his caption short and sweet. 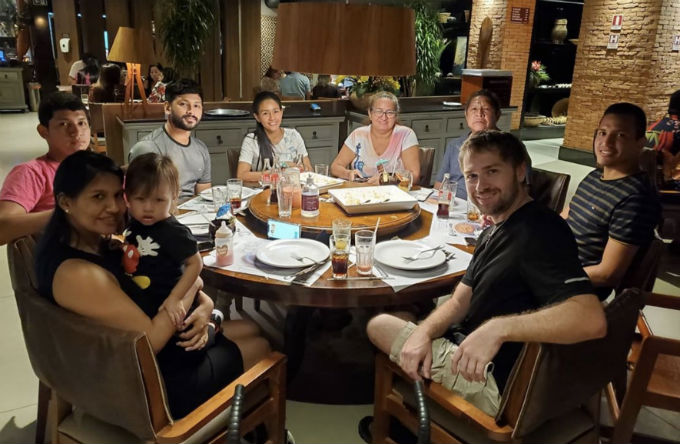 There is no question Paul’s recent social media messages are a far cry from what he was posting over the summer. In a matter of months, the 90 Day Fiance stars went from filing restraining orders against each other, with Karine going into hiding, to celebrating their marriage with family.

Further proving Karine and Paul are working hard to put the pieces of their broken family back together, the couple gave son Pierre the best Halloween. The entire family dressed in costume and posed for pictures to honor the holiday.

It has been three years since Karine Martins married Paul Staehle, and life has been anything but wedded bliss for the couple.

Hopefully, they have learned from their tumultuous breakups and reconciliations. 90 Day Fiance fans certainly don’t have high hopes that all the relationship drama is in the past.