Piers Morgan, 55, and his Good Morning Britain co-host Susanna Reid, 49, kick-started the show by talking about sports fans being able to return to stadiums to watch football matches following the ease of coronavirus rules. They then referred to a game between Millwall and Derby County that took place on Saturday which hit headlines when some fans booed players for taking the knee to support an end to racial injustice and inequality. Furious by seeing such behaviour, the ITV news presenter did not hold back in telling Millwall fans what he thought of their actions.

The broadcaster said: “There are black players in the Millwall teams and imagine what they thought when their own fans booed them. And I bet you think it happened everywhere, but it didn’t.”

He then explained where the protest of taking the knee originated from being a conversation between a war veteran and a footballer.

Referring to said discussion between the pair, Piers added: “In the military, when we lose a colleague in battle, we take the knee as a mark of respect.

“And it came, this whole global phenomena of taking the knee came from that conversation between a Green Beret telling a footballer, ‘Take the knee because it’s a sign of respect we show in battle when we lose colleagues’.” 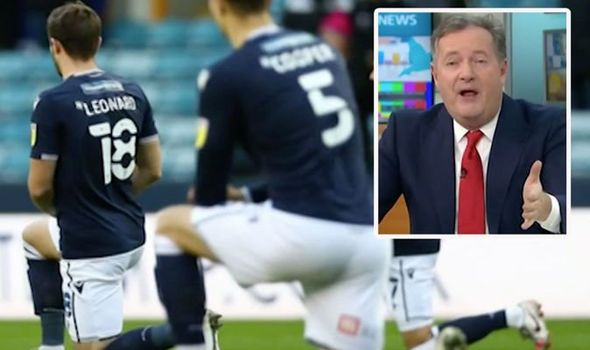 We will use your email address only for sending you newsletters. Please see our Privacy Notice for details of your data protection rights. Piers Morgan slams Laurence Fox in furious row over Covid restrictions

“That’s what the history is, nothing subservient at all,” the presenter explained, before adding how Foreign Secretary Dominic Raab, 46, thought taking the knee was something originating from television fantasy drama, Game Of Thrones.

“Because he said that, everyone believes it, everyone who wants to believe it. It reinforces it,” Piers added.

“It’s a dog whistle to these idiots down at Millwall and I know Millwall fans, they are not like this.

“I say to them, is this what you want your club to be?” the furious broadcaster asked the Millwall supports watching at home.