Piers Morgan, 54, and Susanna Reid, 48, were joined by Mr Broccoli in the studio to give him a platform to express his views on Climate Change. The guest, who identifies as the green vegetable, left the Good Morning Britain hosts riled as he couldn’t explain why a plant based diet would be effective in putting a stop to Climate Change.

“I’m just a humble broccoli but I want people to feel they can come and take part in this protest,” the guest began, which left the hosts with more than a few questions.

“But you have to explain to them why a plant based diet is actually going to be effective. If you don’t know the science, how are you going to do that?” the host asked.

“I am just a broccoli,” the guest reiterated, with a frustrated Susanna stating: “But you have a point to make don’t you.”

Explaining his position, the guest said: “My point is environmentally speaking, we’re in incredibly hot water and we d need to transition to a plant based food system.” 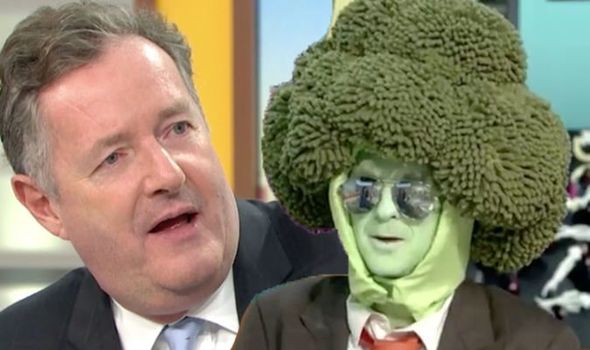 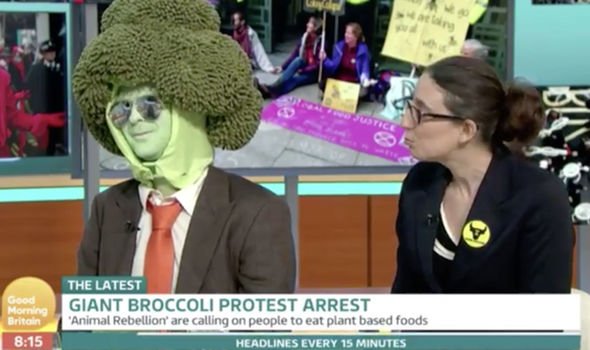 “I’m just a broccoli at the end of the day,” the guest remarked, with an irate Piers adding: “I know that,” before he was interrupted as the guest pulled out a banana from his pocket to act as a phone.

Susanna wanted to get to the bottom of the issue without any comedy.

“I’m not sure you’re to win anyone over by being dressed as a broccoli to make a political point,” she snapped. “This is a joke?” 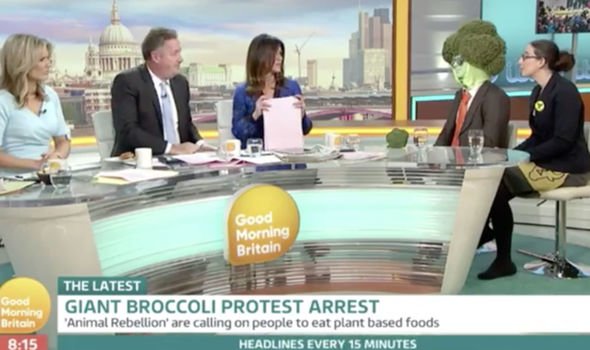 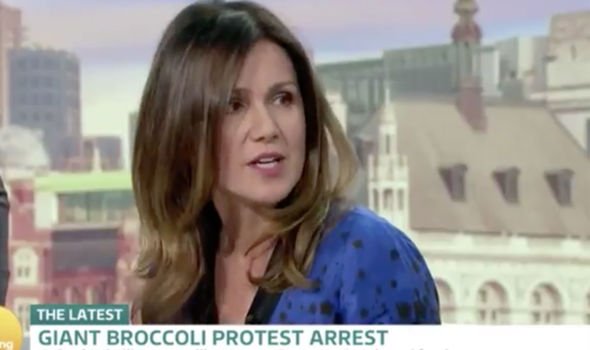 It’s just a lot of waffle

“I just think you’re not doing your cause any help at all,” Susanna opined as she and Piers became more frustrated with the guest.

The controversial presenter’s co-host explained to Mr Broccoli: “For those people genuinely concerned about climate change and I think you have an extraordinary opportunity now to [help] your profile.”

Piers interjected and asked: “Give me on scientific fact why I should give up eating meat?”

“A plant based food system is great for the environment,” the guest replied.

As he failed to give a legitimate answer once again, Piers remarked: “It’s just a lot of waffle isn’t it broccoli?”

A fellow campaigner who was last next to Mr Broccoli for the entirety of the interview chimed in to try and add further to the debate.

“What we need is systemic change to move towards a plant based food system,” they added.

“This is about the government, not us individual, normal, working-class people who can’t afford to buy electric cars.”

Susanna hit back: “Well you’ve sort of made it about you individually.”

Referring to the Extinction Rebellion protests, Piers raged: “You lot have basically spent two weeks paralysing the city of London.

“And when we give you the chance to come on national television to present your case, you sit there dressed like a broccoli saying, ‘Yeah, you should eat plants.’