Fans of Lee Child’s book series, Jack Reacher, have only ever seen the character on-screen portrayed by Tom Cruise. After an entire franchise, fans felt the popular book characters had not come to life 100%. Amazon Prime Video‘s Reacher Series, starring Alan Ritchson, embodied the character like never before. Not only with the actor’s physique and demeanor but how the Reacher character cares about clothes.

‘Reacher’ entails a former army soldier living as a nomad

When fans first meet Ritchson’s Jack Reacher in the series, he immediately captures attention. A huge reason is his tall and muscled physique that is strikingly different from Tom Cruise’s version. He often talks about how he now lives his life doing what he wants throughout the series. He goes state to state living as a nomad. After leaving the army, he has time on his hands.

When he reaches Margrave, Georgia, fans learn just how Reacher stuck more to the book version of the character. He is not nimble and cannot run swiftly and almost elegantly. Reacher is a brute and muscular soldier. He arrives in town with next to nothing except the clothes on his back and a passport.

Fans see on multiple occasions in Reacher that the character has little interest in material things. It comes off when looking at his clothing choices and purchasing habits. Lee Child explains its ho his mind functions.

Compared to Reacher, fans can tell the movies give the character more pizzazz with his clothing in the Tom Cruise franchise. It is functional but more elaborate than what is seen in the series. According to Slate, Reacher’s clothing choice in the series mimics Child’s character depiction in a new introduction to Killing Floor.

As seen in the series, Reacher has very little interest in understanding what is deemed a “normal” civilian life outside the army. Child describes it as, “if he doesn’t know how something works, he just doesn’t participate.” Reacher much less cares about how he dresses.

He arrives in town wearing a simple T-shirt and jeans. He goes to a thrift store and buys enough to stay decent and a jacket when needing clothes. In one scene, he notices his jacket has a hole in the back, covers it with duck tape, and wears it the rest of the series.

“To him, this is a rigorously rational solution to an evident problem,” wrote Child. “The contrast between his narrow and highly developed skills and his general helplessness humanizes him.” Fans chuckle at him wearing a NY tourist shirt, but he does not care because it is functional. He even willingly throws away a new suit.

Is the character’s outlook on clothes in ‘Reacher’ rational? 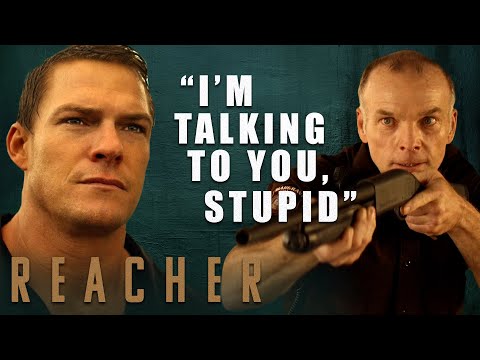 The fan explains Reacher travels around the country with a toothbrush and passport and the clothes on his back. He also rarely washes his clothes or simply buys a new set.

To many, Jack Reacher having no luggage or care for clothing in a minimalist mindset. It might also result from living a majority of his life in the army and constantly moving with his family. On Reddit, a fan asks whether Reacher’s living habits are idealistic or possible.

“He stays in cheap hotels/motels. He takes freebies whenever he can, and pays for the rest on an Army pension that he took prior to the max-age, and from funds, he happens to find along the way,” said the fan.

A fan on Reddit explained the character is “The lone drifter. A popular trope in cinema and literature.” The original fan’s question is not necessarily about practicality. “Possible, but is it desirable? How are you with solitude punctuated by brief encounters with various aspects of humanity?” said the fan. Reacher’s habits in the series are a way for the character to keep living his story and make for interesting scenarios. Other fans on Reddit believe it is impossible in the present time.