“The longer I watch this show, the worse I feel for these poor dogs,” one Twitter user wrote of new ABC series 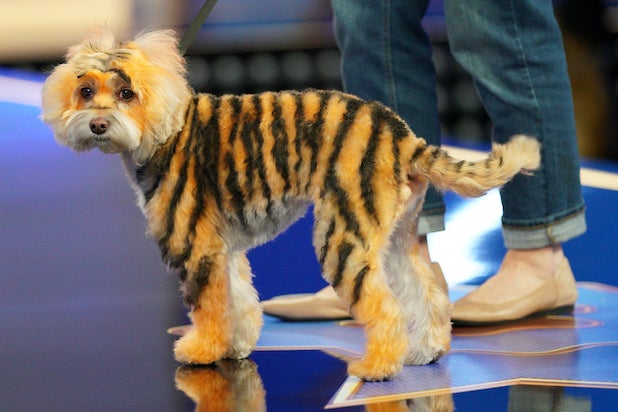 “You can’t convince me dogs like being poked, cut, bejeweled, and dressed up like this,” one Twitter user posted of the somewhat extreme pup-pageant series, which debut on Tuesday.

“That show went from awww cute to omg are these doggos ok to I’m traumatized real quick,” another wrote.

A third asked animal-rights group PETA to “Save these poor dogs from this nightmare.”

By the way, if you’re wondering why “Pitch Perfect” star Wilson is hosting this show, other than the titular pun, she is a fourth generation dog show-er. Wilson’s great-grandmother started The Beagle Club of Australia and the comedic actress’s mom is a renowned international all-breed dog show judge.

Ahead of the series launch, at the latest Television Critics Association (TCA) press tour, Wilson, “Pooch Perfect” producers and the show’s judges were asked about the experience for the dogs and if there will be a “Do not try this at home” disclaimer.

“Some dogs like it more than others. Some find it uncomfortable. So we made sure we had the kind of dogs that were used to the entire process,” Executive Producer Elan Gale said.

“Those that are chosen to become creative partners, they are dogs that love the attention,” Jorge Bendersky, a judge on the show and a dog groomer in his own right, added. “If you have a dog that is very shy, you probably won’t want them to have pink hair and walk on the street and have people taking pictures.”