Eleven episodes into The Real Housewives of Beverly Hills’ 11th season, Sutton Stracke is still getting used to the feel of that diamond in her hand.

“It still feels pretty heavy,” she quips to ET over video chat. RHOBH viewers first met Sutton last year as a “friend of” the group, even though she filmed season 10 as a full-time Housewife (various reports cite Sutton’s ex-husband’s unwillingness to sign off on their minor children appearing on the show as the reason for this). Her season 11 story is the exact opposite: She filmed as a “friend of” and found out at the end of production that she’d be featured as a full-time ‘Wife, an upgrade that left her in shock.

“I was very quiet,” she recalls of her initial reaction to the news. “I said, ‘Listen, y’all better not be punking me! Are you sure? Are you sure this time?'”

It makes sense, though, seeing as Sutton’s found herself in the mix of nearly all the drama that’s unfolded so far this season and, judging by the midseason trailer, more to come. The current saga is that of Erika Jayne, whose divorce from attorney Tom Girardi and subsequent legal battles/entanglements are taking center stage on RHOBH. Episode 12 picks up with the women still at Kyle Richards’ house in the southern California desert, living in the aftermath of Erika snapping at Garcelle Beauvais after Garcelle brought up an on-camera (or, at least, hot-mic’d) conversation she and Crystal Kung Minkoff had with the “Pretty Mess” singer about her ongoing divorce. Erika confessed to her co-stars that Tom still calls her on a regular basis, a fact she was upset Garcelle would share with the larger group.

“I do mind you saying that, ’cause I feel like you’re betraying my friendship right now, but please, have your moment. Go ahead, go ahead, babe,” a visibly shaken Erika fired off at the The Real co-host. “You got it out of me once and now you want to do it again, don’t f**king sugarcoat it.”

“What the f**k?” Garcelle asked in a confessional interview, before the episode cut back to a full-on emotional breakdown from Erika, who excused herself from the group to cry off camera, but not before telling Garcelle that bringing up the “private moment” was “dirty.”

“You didn’t have to do it in front of them,” she said, wiping away tears.

Viewers were left confused by the ordeal, with co-star Lisa Rinna throwing fuel on the fire by posting on Instagram about an alleged unseen confrontation between Erika and a producer that was part of Erika’s back and forth with Garcelle. ET spoke with Sutton before Lisa’s post (which Erika then reposted), but she heavily hinted at the rumored incident. 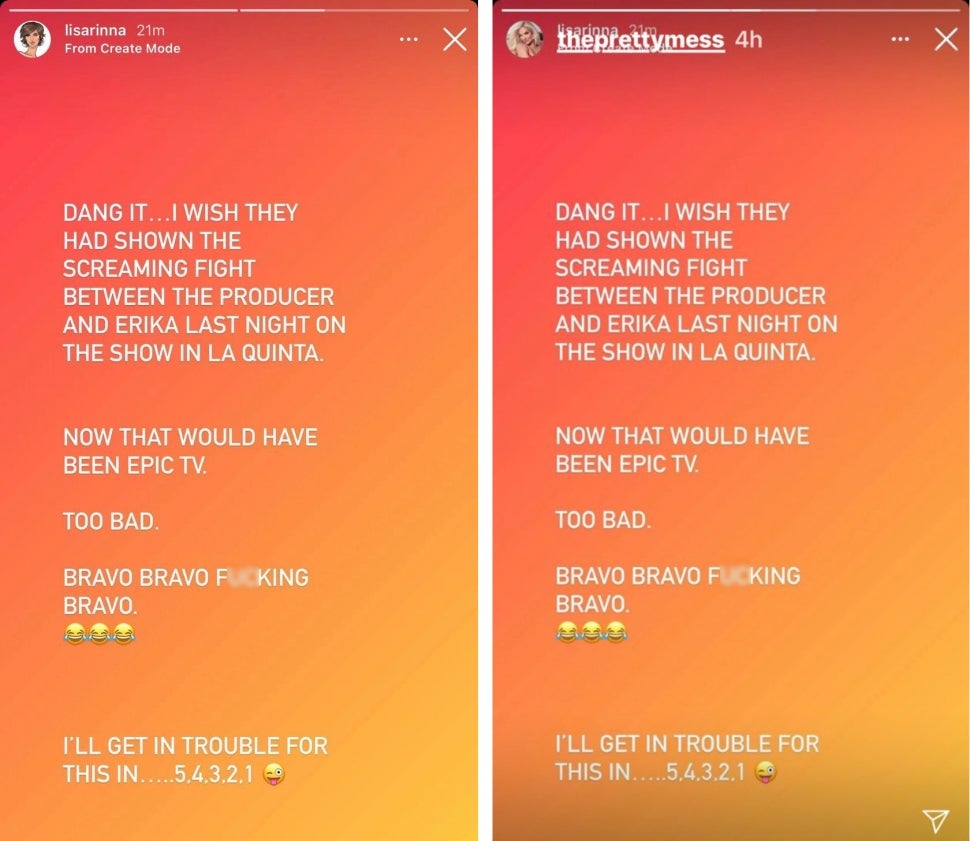 “The whole breaking of the fourth wall is, I think… well, speaking from last year, it got out of control and it just kept happening,” she notes, referencing now-former castmate Denise Richards’ habit of asking not to discuss things on camera. Remember, “Bravo, Bravo, f**king Bravo?”

“And as someone new, I didn’t understand when it was like, stop, start, stop, start,” Sutton says. “So this season that hadn’t happened. So all of a sudden for that to happen again, it felt very dubious, and it was done in a very kind of nasty way, I felt like.”

Sutton’s attitude toward Erika has changed over the course of the season, which she started as a supportive girlfriend, offering to be Erika’s divorce guru and even going so far as to bring her a breakup care package before a spa day. Then, as more of Erika’s story came to light, a shift happened. Much like the audience, Sutton found herself confused by certain things, like convoluted details Erika shared about a car accident Tom had years ago.

“I’m a thoughtful person, and I have to think about things — sometimes — before I say them, sometimes not, but when it’s a really thoughtful thing, I think about things,” Sutton muses, explaining why she started to distance herself from the situation as the season went on. In a preview for episode 12, she tells the other ladies, “I’m not sure I want to be around Erika during this time.”

“That looks harsh, doesn’t it?” Sutton remarks. “Because I think we’re starting to hear more and more about this case, and I’m starting to get more and more uncomfortable, legally speaking. That was just my feeling.”

“It takes me sometimes days, weeks before I can actually speak on something,” she explains. “But I’ve been thinking about the moment at Crystal’s house, after we made the dumplings. And I say to all the girls, ‘Trust is one of my biggest, it’s a big thing for me,’ and it’s something that I work on in all of my relationships. Relationships with men, with anybody, with girlfriends. And so I really was feeling like Erika and I were building a trust in our relationship. And so, I think that’s what’s starting to tilt my head a little bit.” 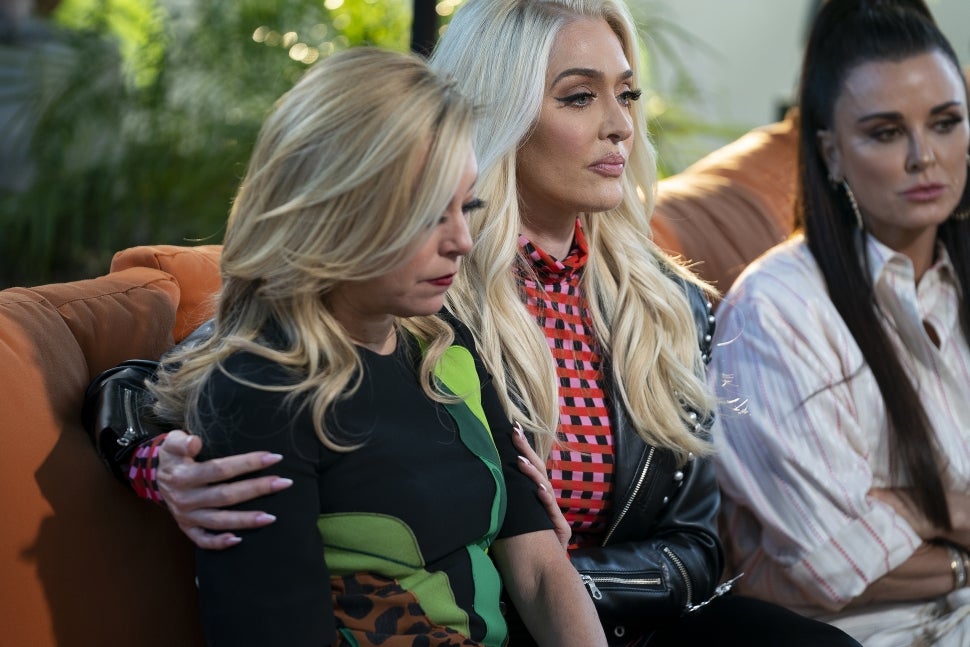 Knowing everything she’s learned from Erika and read in reports about her ordeal, Sutton says she “believes some of” what the entertainer has shared. The boutique owner says the trip to the desert (to a city called La Quinta, just outside of Palm Springs) ironically created a snowball effect of drama. The Los Angeles Times published an explosive story about Tom and Erika’s alleged activity just before the women returned home.

“I read it, actually,” Sutton says. “I don’t read it once. I don’t read it twice. I read it three times. And I start to put things together, for me. … And I have a fresh perspective because I don’t know Erika as long as the other girls, and I think I have fresh eyes on it. And so I think it doesn’t go well.”

That “doesn’t go well” might be an understatement. As fans know, a tense confrontation between the two women is set to play out on the show in the near future. The very first trailer for season 11 included a scene in which Erika, gritting her teeth, tells Sutton, “I am not a liar. You have a lot of f**king nerve. … Shut the f**k up.” Then, in the midseason preview, another moment from the exchange: “If you ever call me a liar again, I’m coming for you,” Erika fired off as a warning, going on to tell the group, “Guess what, b***h? I’m not threatening. I’m promising.”

“I think it was worse in person,” Sutton teases of the incident, which goes down during a dinner party at Kathy Hilton’s house. Then, there will be more where that came from. The Erika-Sutton dynamic seems to cause rifts in the group, as hinted at by a moment from the midseason trailer in which Sutton gets upset with Kyle.

That should come as no surprise to fans, seeing as two of Sutton’s most memorable on-camera moments came at points of frustration. There was season 10’s “let the mouse go” comment, and in season 11, the “ugly leather pants” fight with Crystal. Sutton delivered that dig during the final act of her feud with the Real Coco founder, which began during the cast’s trip to Lake Tahoe. The two were already not gelling, but their relationship (or lack thereof) took a turn for the worse when Sutton walked in on a naked Crystal while innocently trying to return her coat. That spiraled into a tennis match over semantics, with Crystal calling the moment a “violation” and Sutton (and others) taking umbrage with said word. The duo was ultimately able to squash their beef for the good of the group.

“Time kind of heals most wounds, and we had to come to a place where we were like white flags on both sides,” Sutton shares. “Just truce, because it was exhausting, and neither one of us wanted to continue to fight.”

Fans got a kick out of the pair poking fun at their once-flawed dynamic on Instagram, though some questions still remain around that “ugly leather pants” fight. Sutton made that comment about Crystal’s fashion choices after Crystal accused Sutton of being “jealous,” but jealous of what remains a mystery. When asked if it could be a fourth-wall breaking something, as in Sutton being jealous of Crystal being a full-time Housewife while she was (at that point) a “friend of,” Sutton says she’s never gotten any sort of clarification.

“That’s not how I felt. I didn’t care. I chose to come on. I didn’t have to come on as a ‘friend of,’ I wanted to, because it’s a fun experience — sometimes — and I really enjoy getting to know the women,” Sutton offers. “I wanted to get to know all of them more. I wasn’t jealous. I was happy for her. I don’t know who she is, when we started. So, of course, we all knew that there was going to be a new castmate on. I don’t have any ill will towards anyone like that. So it never occurred to me that someone would think I was jealous. So I don’t know where that came from. But I didn’t feel jealous because of that, at all.”

Even though she didn’t film full-time, Sutton is getting a chance to share more of her personal life this season than she did last. That includes her role as a mom, thanks to daughter Porter turning 18 and opting to film while home on a break from college.

“It was just so fun,” Sutton gushes. “She hadn’t been home that long from school. So it was like this, ‘Hey, I’m so glad you’re home from school. Let’s get dressed up and go on camera.’ And she was so happy to do it. And we had so much fun, and it’s been fun to watch her on television.”

Sutton’s sons, James and Philip, did not shoot any of season 11, but Sutton is hopeful they’ll get a chance to come around in future years.

Sutton’s referencing a moment from a few weeks back when Garcelle spoke to her 13-year-old twins, Jax and Jaid, about dating and potentially getting remarried. Jaid told her, “You love me. You don’t need to love anyone else.”

“I don’t know if you can ever capture that,” Sutton says. “It was such a sweet, endearing moment. I’m like, ‘I want that. I want that moment with my boys.'”

“They love the show, they love watching it,” Sutton reveals of her own sons. “It’s so funny. They really do. Every Wednesday they’re like, ‘Mommy, time to watch,’ and they tell their friends. It’s just really crazy. We’re like, ‘Is our demographic a 16-year-old boy?’ I don’t know, but it is now.”

There’s still a lot of season left to watch, and Sutton is especially excited for fans to share in the cast’s trip down the California coast to Del Mar, as well as the finale party, a Chinese New Year’s event hosted by Crystal, though that features yet another tense exchange between Sutton and Erika, with Erika telling her fellow Georgian, “I’m asking you to believe in me instead of an article.” 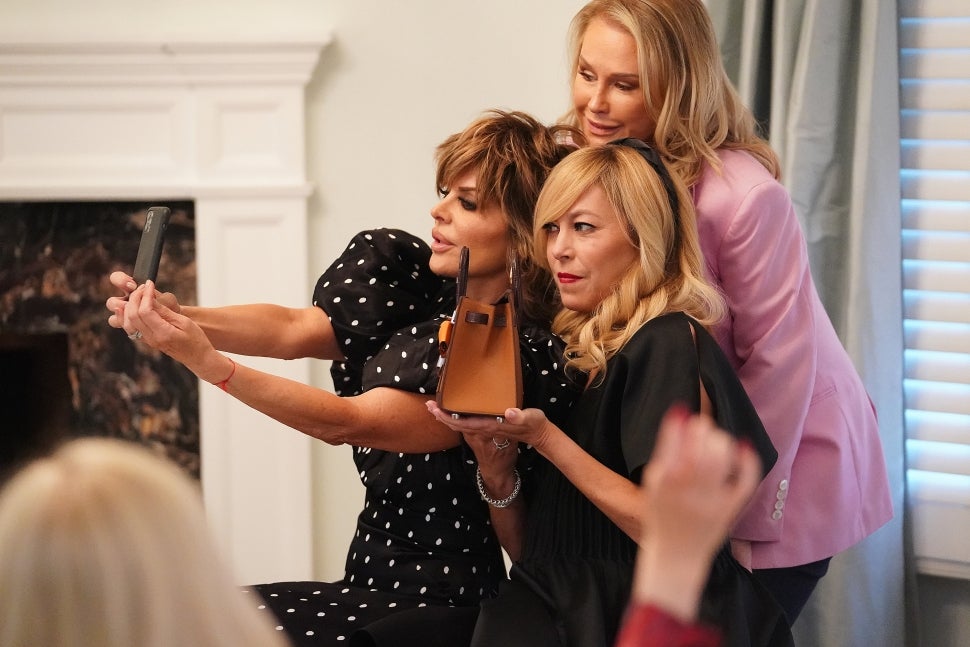 While fans wait to see how that all plays out, Sutton is keeping busy with her eponymous West Hollywood boutique — though she did not take any of Kathy’s unsolicited business advice, like getting rid of the store’s “empty closet” (aka the powder room) or Sutton’s workspace.

“The desk stays, we do work there,” Sutton cracks. “But thanks, Kathy.”

The Real Housewives of Beverly Hills airs Wednesdays at 8 p.m. ET/PT on Bravo.