Rotten Tomatoes has taken another step towards verifying that users who post reviews or ratings of movies, have actually seen them. The site’s Audience Score feature — distinct from its professional review-based Tomatometer — became a haven for trolls to negatively review or rate unreleased, unseen films. Today’s move is meant to increase consumer confidence in the widely-used and influential review aggregator.

Earlier this year, the site announced that it would not allow users to post comments about a movie until after its release, although that only delayed the inevitable: trolls who wanted to trash a movie they had yet to see, just had to wait a bit longer to do so. Starting today, that changes.

In a blog post Thursday morning, Rotten Tomatoes said that users who purchase tickets on parent company Fandango’s website will get a verified badge next to their review, and only those “verified” reviews will count towards the final Audience Score.

The new initiative will launch this weekend with new movie openings including “Booksmart” and “Aladdin.” Verified Audience Scores will also be displayed on parent company Fandango’s website. 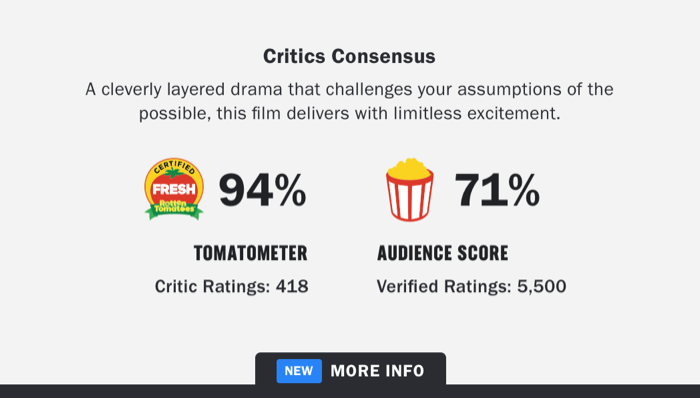 A recent prominent example that might have benefited from today’s announcement, and that helped draw further attention to this particular flaw in the website’s system, was Marvel Studios’ first female-led superhero film, “Captain Marvel.” Ahead of the film’s release, its “Want to See” score on Rotten Tomatoes had fallen to 28%, as a result of what was described as an effort by primarily male trolls to bomb the film’s page with negative comments, attacking it and star Brie Larson for their perceived feminism.

In response, Rotten Tomatoes adjusted the “Want to See” feature so that it only showed the number of people indicating interest in the film, instead of a percentage.

On the morning of the movie’s opening day in the US, the film held a 33% Rotten Tomatoes Audience Score, from more than 58,000 reviews, which surpassed the number of audience reviews that “Avengers: Infinity War” drew during its entire theatrical run.

The sheer number of reviews and resulting low score was attributed to online trolls, although Rotten Tomatoes later stated that a bug was responsible for the high count of reviews. 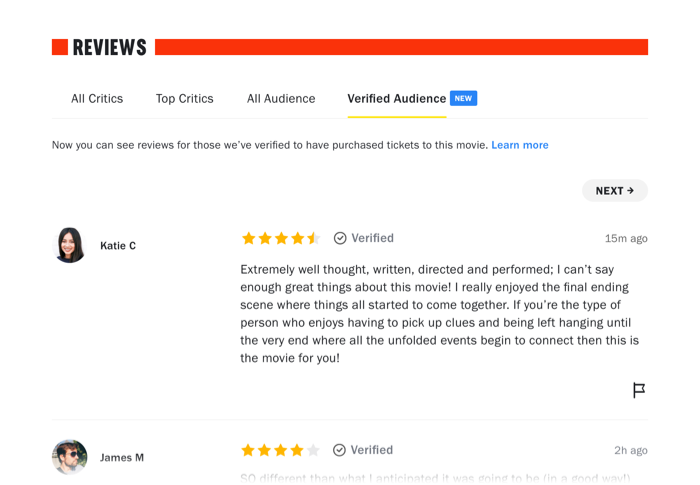 To be clear, today’s announcement doesn’t mean that every audience review will be written by people who have actually seen each movie. Audiences will still be able to post unverified reviews, but verified reviews will be marked as such. Additionally, it’s quite possible that the most determined of trolls could still very well pay for a ticket (and not see the movie) just to be able to negatively affect a title’s Audience Score.

But it’s a move in the right direction, and, per Rotten Tomatoes, part of an ongoing effort to strengthen its Audience Score feature, with plans to also partner up with AMC Theatres, Regal and Cinemark Theatres to verify purchases from those theater chains later this year.

“Today is another phase in a rollout of changes we’re making to our Audience Score, user ratings, and user reviews,” the blog post said. “And there will be further enhancements to come. We’ll take your thoughts and ideas into consideration as we continue to evolve our recommendation tools.”